Mexico is one of the few countries that releases CPI twice a month: once during mid-month and a final reading at the beginning of the following month.  Mexico released its mid-month inflation for December on Thursday.  The headline mid-month reading was 7.77% YoY vs an expectation of 7.8% YoY and a November print of 8.14% YoY.  This was the lowest reading since May and the third monthly decline in a row after peaking in September at 8.86% YoY.  In addition, the Core CPI mid-month reading was 8.35% YoY, nearly inline with expectations of 8.34% YoY.  The most important part of the mid-month Core CPI reading was that it was lower than November’s reading of 8.66% YoY.  This was the first decline since early 2021!  Note that the Bank of Mexico targets 3% inflation.  The Bank of Mexico had been mirroring the Fed with its interest rate hikes, with the overnight rate now sitting at 10.50%.   The Fed is expected to hike rates again at its February meeting by 25bps, but when will it be time for Banxico to release the peg with the FOMC?

USD/MXN has been moving lower since April 2020 when the pair reached a pandemic high of 25.7836.  In addition, since late 2021, USD/MXN has been moving lower in an orderly downward sloping channel. This week, the pair is attempting to break above the top trendline of the channel at 19.9348.  However, notice that USD/MXN is also trading at near an upward sloping trendline dating back to July 2017 near 19.6520. 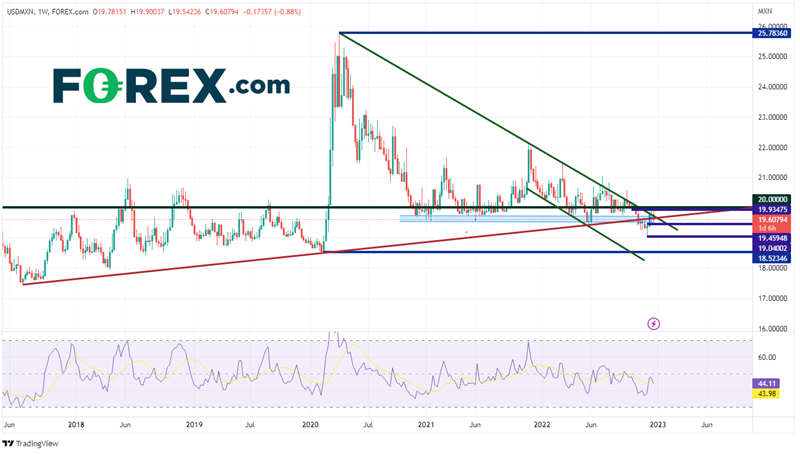 On a daily timeframe, USD/MXN broke below the long-term band of support that the pair had remained above since early 2021.  It reached its lowest level since February 2020 on November 29th at 19.0400.  The pair then bounced back into the previous support zone where it has been trading since December 5th.  Notice that this is also in the area of the long term trendline dating to July 2017 (red line). If USD/MXN moves above the support zone and the long-term trendline, it will need to move above 19.9348/20.000, the first solid level of resistance.  Above there, price can move to the highs from September 28th at 20.5802, then the highs from August 2nd at 20.8282.  However, if the pair breaks lower, first support is at the lows of November 30th at 19.1959, then the year lows at 19.0400.  Below there, the next support level isn’t until 18.5234, which is the lows from February 2020. 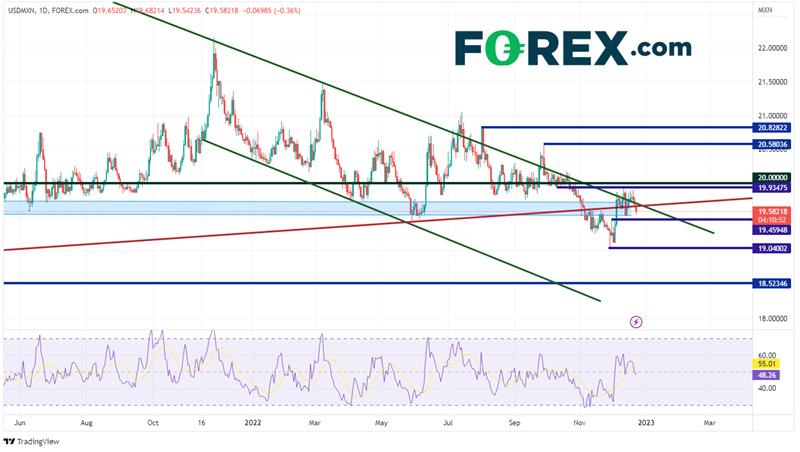 Mexico’s Core CPI print was lower than the previous month for the first time since early 2021.  The Bank of Mexico doesn’t meet again until February 9th.  By that time, Banxico will also have a look at December’s inflation data.  If the readings are lower than November’s prints, will it still hike rates as much as the Fed?