Indications so far from Wednesday’s U.S. stock trading session suggest that the move to favour cheaper, higher-yielding shares over long-standing 'momentum' outperformers, may be fizzling out already. Despite lacklustre sessions earlier this week, which saw the S&P 500 index close flat on Monday, Wall Street has been awash with talk over a sharp swing—known as a ‘rotation’—away from one set of equity market sector preferences in favour of another. The move back to ‘value’ shares from ‘momentum’ stocks was the fiercest over one trading day, according to data gathered by Bloomberg. The chart below shows daily percentage changes of the spread between Bloomberg’s ‘U.S Pure Value Index’ and ‘U.S. Pure Growth Index’.

‘Momentum’ is typified by techy consumer growth names like Amazon, Facebook and Netflix which continue to sit on triple percentage digit price returns over several years. Banks, insurance firms, makers of capital goods, telecoms and other industrial segments often populate the ‘value’ sphere. What appeared to be the beginnings of a value comeback boosted stocks in many industries that have struggled over the last few years. On Tuesday, this created a sea of green that included all but one S&P 500 bank (the exception was Wells Fargo) also boosting struggling retailer JCPenney above its consensus target price for the first time in several weeks, amid apparently no company specific news. 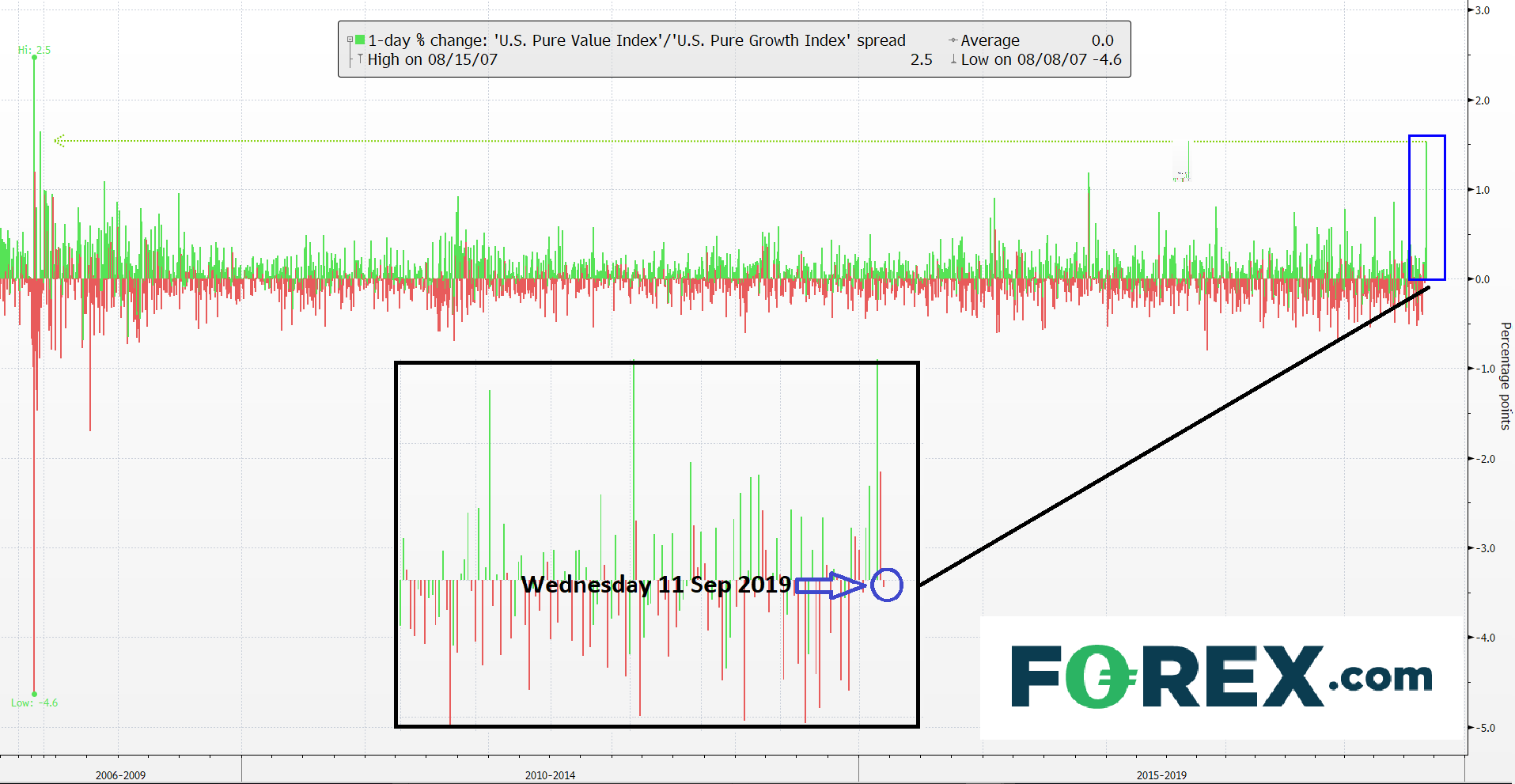 By Wednesday, the same measures show ‘value’ slumping back sharply. That may not be much of a surprise given the outsize move in the opposite direction earlier in the week. Part of the swing is associated with this week’s resounding government bond market correction as the multi-month rally in developed market bonds and beyond shows signs of fraying. The idea that links a bond correction to a possible swing to value is that if the bond rally may soon peter out, investors might be switching back from chasing absolute bond price gains and returning to yield seeking in shares. With Treasury yields looking less sure-footed into the U.S. cash open though—yields were 1.4 basis points (bp) to 3.2bp lower across the curve—enthusiasm about a switch back to ‘value’ is lower too.

As for whether this week’s events may mark a lasting turn in investors’ prevailing preference, the jury’s out. If bonds (which move inversely to yields) continue rallying on the back of redoubled Fed easing hopes, value may continue to struggle. But what if recession fears bed down deeply enough to trigger a lasting move to the relative safety of ‘value’ stocks against preferences for shares related to other styles, like ‘momentum’, but also ‘volatility’ and others? In that case, eye-catching swings we’ve seen this week could pave the way for lasting changes among stock market leadership.

The technology-stock heavy (and thus ‘momentum’ / ‘growth’-sensitive) Nasdaq 100 index is the most relevant backdrop as the eternal battle between those styles comes to a head again. The US Tech 100 CFD proxy shows the market is in a long, slow coil as it hovers close to July’s latest record peak. Closing in, the market’s recovery from August’s mini-correction remains valid, particularly judged from coherence of another ‘coil’ or wedge, forming over several weeks. As it stands, its hypothetical effect is that it will keep funnelling prices higher so long as there are no sustained moves to the downside of the pattern. As prices ascend, the first significant impediments are a moderate distance away. 8018, was the high on the day after July’s record and the best the market could do on its only down day that week. The peak itself was 8035. Even if a ‘value’ takeover really has begun, a bullish-looking Nasdaq chart suggests the shift will be a gradual rather than sudden one, if at all. Even then, true confirmation would still need to wait for 1. A further Nasdaq 100 failure at this year’s top so far, and 2. A clean break of the nearest proven major support, 7308, followed by inarguable follow-through.