US index futures have regained some of their poise after Thursday’s big plunge, which erased gains made earlier in the week. We have core PCE price index coming up today to help lift sentiment. But if the Fed’s preferred inflation gauge doesn’t show a similar drop as CPI, the markets will likely remain under pressure.

Before we discuss the macro factors further, let’s have a quick look at the chart of the Nasdaq 100 after the tech-heavy index broke further support levels on Thursday: 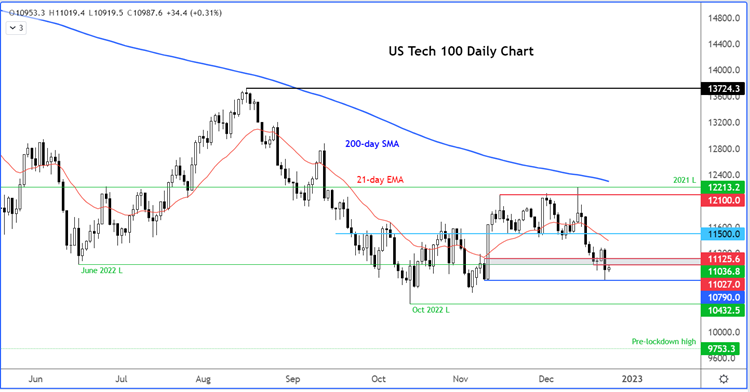 The broken support levels include the 11035 to 11125 range, which could now turn into resistance. The Nasdaq found support at 10790. But if this level gives way then there’s nothing further until the October low at 10432.

Unsurprisingly, this current macro environment is not one you would associate with excessive risk-taking and that’s how it has proved once again. The economic outlook is not going to change overnight, which means much of the issues we are facing right now could well be with us well into 2023. And after a big rebound starting in October, much of the positivity about the Fed pivoting to a less hawkish stance has now been priced in. So, I reckon that the risks are skewed to the downside for stocks in 2023.

While optimism about inflation peaking may keep the downside risks limited, that is all I can think of in terms of something that could provide support for stocks. However, you can argue that at least some of this peak-inflation narrative is already priced in after the markets surged higher from their October lows. Without seeing a strong economic recovery to help boost revenue and profit for corporates, the equity markets will likely struggle to go higher in early parts of 2023

Something else that has been providing support all these years had been central bank support in terms of QE and record low interest rates. This is not going to be there anymore, with inflation is still very high. Government stimulus will be limited, if any, after they already spend vast amounts to help during the pandemic and now with energy crunch in Europe.

The first week of January could end with a bang, if US employment data shows a major surprise. The headline non-farm payrolls number has beaten expectations in each of the previous 8 months, with the prior months continually being revised higher. US jobs market remains hot, and while that’s the case, the Fed will be encouraged to keep its policy tight. If we get another set of stronger-than-expected numbers, then this could provide renewed support for the dollar.

Stripe IPO: Everything you need to know about Stripe
By:
Ben Lobel