Nvidia shares rose 2.7% during after-market trade thanks to strong data-centre demand helping them beat analysts Q3 revenue expectations. Earlier in the day they also announced a partnership with Microsoft to build an AI super computer. However, their EPS (earnings per share) was a miss and Q4 revenue guidance was also slightly lower than expected.

The tech stock peaked in November 2021 at 346.47 and managed to fall nearly 70% over the next 11 months, so its bear trend is more than established. Yet in the past month it has recovered an impressive 57.2%, and that makes us wonder whether this is the beginning of a much larger bull trend, or simply a tease of a bear-market bounce.

I’m happy to let the longer-term investors argue that one over, but I do know that we’re heading into 2023 with a Republican House and Democrat Senate, which means we’re less likely to see inflationary policies make their way over the line (good news to equity traders). But we’re also likely to be seeing much lower growth in 2023 and 2024, and cracks are appearing in the US employment sector data – and many big tech companies have announced layoffs or restructuring plans. 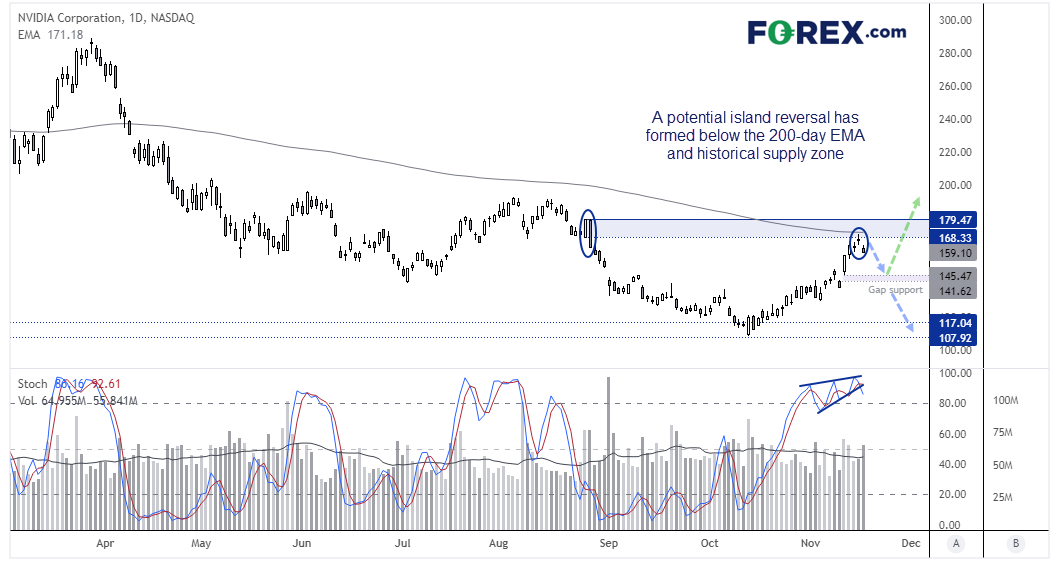 From a technical perspective, I suspect NVIDIA has posted a cycle top. Its rally stalled just below the 200-day EMA, which is a tough mut to crack. A small Doji formed at the cycle high, which is part of a 3-bar reversal called an Island reversal pattern. Furthermore, the reversal pattern is just beneath the prior peak which included a strong 2-bar reversal (and therefore a strong supply zone). Volume was also above average yesterday ahead of earnings and the stochastic oscillator is overbought, which itself is showing signs that it also wants to top out.