NZD/USD: how much more kiwi appreciation can RBNZ tolerate?

With the focus being almost entirely on the issue of Brexit and the pound this week – perhaps rightly so – traders should not lose sight of many other tradable opportunities that will present themselves in the interim. For example, the NZD/USD. The Kiwi has been climbing stealthily in recent weeks, due in part to a modest recovery in commodity prices. In addition, the RBNZ implicitly admitted at its June meeting that it is finding it increasingly difficult to loosen policy further when it once again warned of inflation in houses prices in Auckland being among its main financial stability concerns. Also boosting the NZD was last week’s release of Q1 GDP data, which came in surprisingly strong, at 0.7% q/q versus 0.5% expected and 0.9% in Q4.

But despite a modest rebound in key commodity export prices, they remain uncomfortably low and the RBNZ is desperate to push down the value of the New Zealand dollar in order to make the country’s exports appear more attractive for foreigners. It looks like New Zealand’s economy is therefore almost entirely kept up by high levels of immigration, which in turn may be fuelling a bubble in the housing market.

To be fair to the RBNZ, it has already delivered several rate cuts – the most recent one being in May – and continually jawboned the currency lower. However, each time the NZD went down, the buyers have been quick to step in and prop it back up again.

So the NZD has appreciated despite the efforts of the central bank. Obviously with almost all the other major central banks being or turning more dovish, this has made the RBNZ’s job a lot difficult achieve.

Even the USD has weakened for much of this year as the Federal Reserve continually poured cold water on rate hike expectations due to weakness in data at the world’s largest economy. Today, Janet Yellen was at it again as she sounded a tad more dovish than expected at her testimony, though the Federal Reserve Chairwoman didn’t say anything dramatic to cause the USD to weaken or stocks to jump noticeably.

Admittedly, the NZD/USD has "only" risen by about 10 cents from its recent lows of around 0.62 in August 2015, which is not a massive move, although not a small one either. But should the exchange rate appreciate more then there is so much the RBNZ could tolerate, even if it means further deterioration of the housing problem.

Of course, the market can also correct itself if enough people are convinced that the NZD/USD may be overvalued. One area we may see this happen is around the technically-important 0.7150-0.7230 region, which I have highlighted in red on the chart, below. This area is a key reference point for traders due to the nature of prior price action around here. Will this support-turned-resistance region provide a ceiling to prices? At the very least, we may see a reaction from this region which could lead to a short-term pullback towards the support levels shown on the chart. However, if price breaks above this region, then this could lead to renewed buying momentum, possibly towards 0.75. This potential scenario will no doubt raise the prospects of a rate cut by the RBNZ, if there is no corresponding rise in economic data surprises.  So whichever way you look at it, the kiwi’s upside potential looks limited. 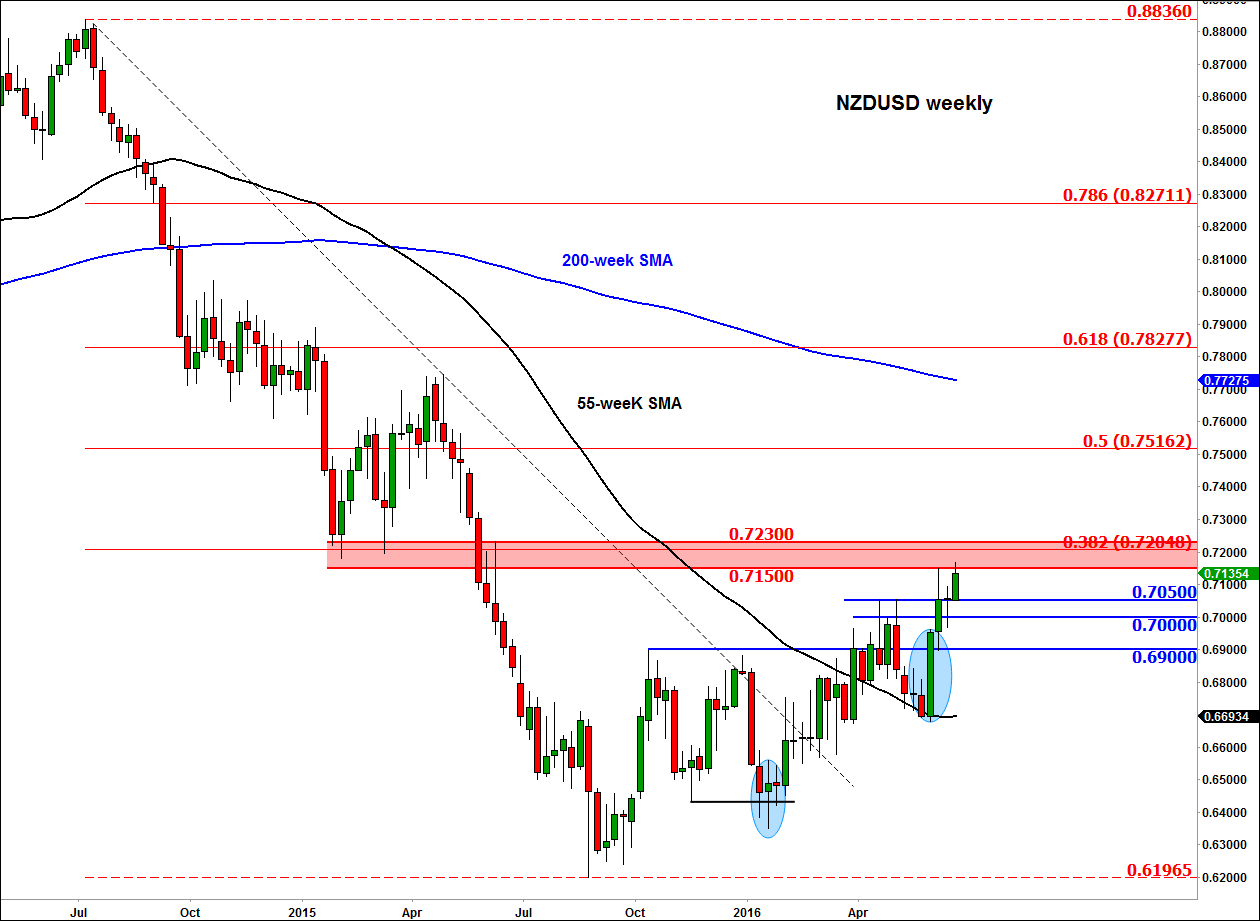