With yields being universally low across the developed economies and the dollar falling, buck-denominated precious metals are shining. They have rallied strongly over the past couple of days in particular after the FOMC sounded more dovish than expected on Wednesday, which helped to push expectations about the next Federal Reserve rate increase further out. Other major central banks have also turned more dovish, with the ECB, for example, expanding its QE stimulus package and the BOJ cutting interest rates into the negative.

Today we are looking at the chart of silver, which is looking increasingly bullish. At the time of this writing the metal was testing the previous high at $15.95 and was threatening to break higher. Silver has already eroded a couple of bearish trend lines and has broken above some key resistance levels too – including $15.80 today, a level which could turn into support upon re-test. Meanwhile, the 50-day moving average is turning higher and the 200 is flattening. So watch out for an imminent "golden crossover," which will be a further bullish development. The RSI indicator has broken above a descending trend line, after working off "overbought" conditions, as it drifted back below 70. So momentum is looking strong, too.

Therefore, as things stand, the path of least resistance is clearly to the upside for the precious metal. What could go wrong? Well, a number of things in fact. The dollar, for one, could find its feet again, while the whole commodities complex could come under pressure from renewed demand fears out of China. But for now at least, the technical outlook is looking bright for silver, and indeed many other precious metals including gold and platinum. Bearish speculators may therefore want to stay on the side-lines until the charts point to a trend reversal.

Some of the bullish targets are shown on the chart. Among these, the prior highs of around $16.30 is an interesting area to watch for this level also converges with the 127.2% Fibonacci extension of the most recent drop. Needless to say, an eventual break above that level could see the metal surge higher as more sellers abandon their positions and fresh buyers come into play. On the downside, a break back below support at $15.80 would be a bearish outcome. If this happens, it would suggest that the buyers are lacking confidence. Sensing this insecurity, the bears will be quick to pounce. For now, they are just waiting for the right moment. The right moment could be days, weeks or even months away. 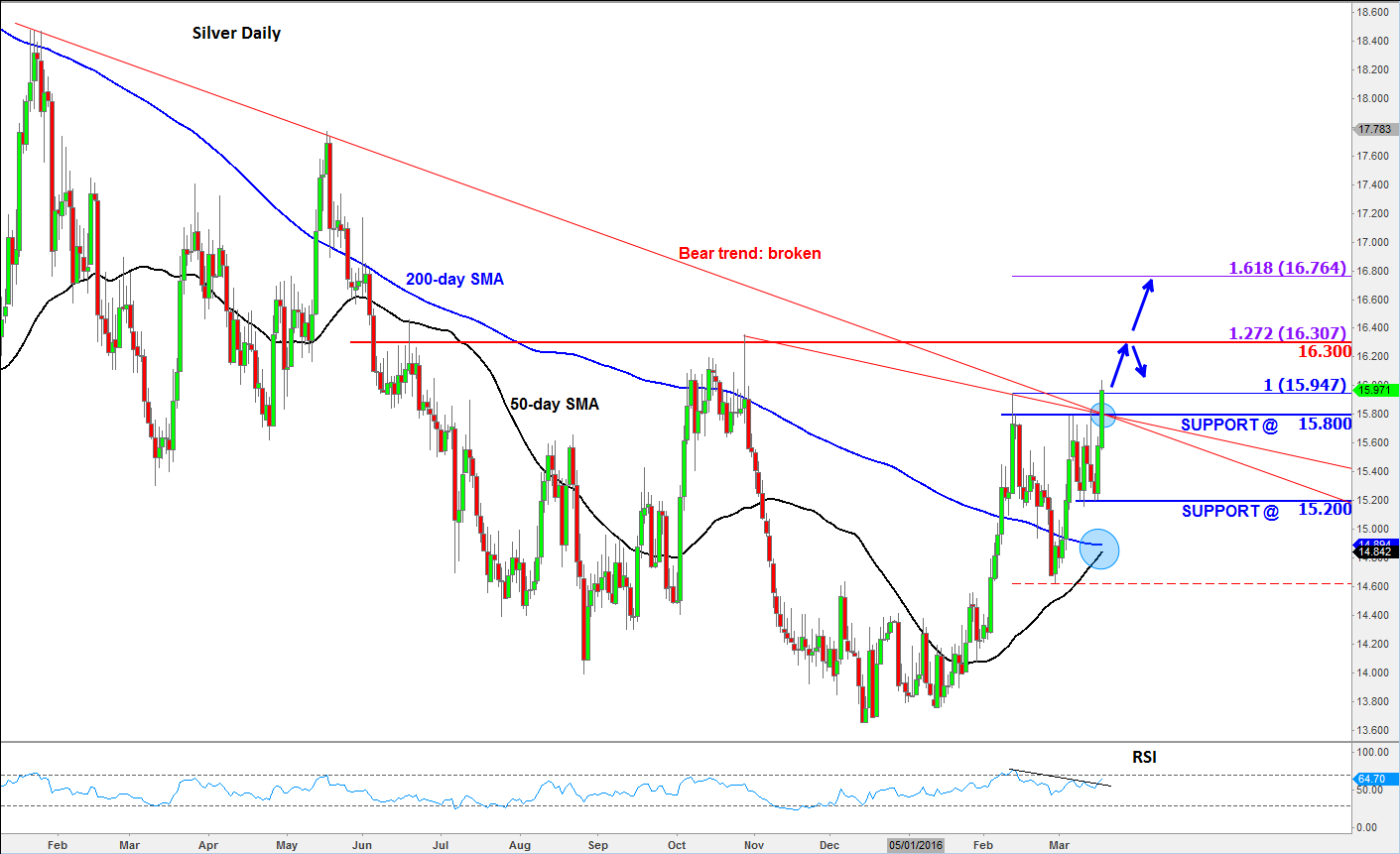