In what was supposed to be a side-show sandwiched between the FOMC and the BOE, the Swiss National Bank interest rate decision meeting stole the spotlight, at least for a little while.  The SNB surprised markets and hiked interest rates, not just by 25bps, but by 50bps!  The committee hiked its main interest rate from -0.75% to -0.25% and didn’t rule out that there could be more interest rate increases to come.  It was the first time the SNB had raised raises since 2007 from the record low rate of -0.75.  The SNB also increased inflation expectations from 2.1% to 2.8% at year end.  May’s inflation reading was 2.9% YoY.  The SNB said the rate hike was aimed at preventing inflation from spreading more broadly to goods and services unaffected by the impact of the Russia/Ukraine war.  In addition, although the SNB said that the franc is no longer overvalued, it also said that it promises to intervene in the fx markets if needed.

USD/CHF had moved aggressively higher from 0.9195 on March 31st to a high of 1.0064 on May 16th.   However, the pair could not hold above parity and USD/CHF pulled back to the 50 Day Moving Average and 50% of the prior move higher, to near 0.9545.  The pair then bounced once again, taking out the 1.0000 level and testing the previous highs, however with SNB rate hike and comments that the franc was no longer overvalued, the pair fell aggressively, currently down nearly 300 pips today! If USD/CHF falls below 0.9545, a double top pattern will have been formed.  The target for a double top is the height from the low between the peaks to the top of the pattern, added to the breakdown level.  In this case, the target is near 0.9050. 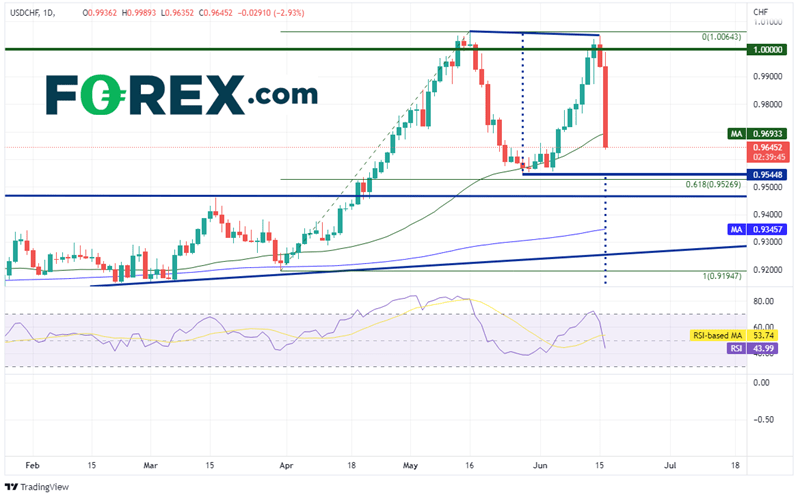 On a 240-minute timeframe, USD/CHF is closing in on horizontal support at 0.9605.  If price breaks below there, the next level is a band of support between 61.8% Fibonacci retracement level from the lows of March 31st to the highs of May 16th and the lows May 27th.  These levels are between 0.9527 and 0.9545. Further down is horizontal support at 0.9470.  Notice that on the shorter timeframe, the RSI has just moved into oversold territory.  If the RSI turns higher, price may begin to move higher as well.  First horizontal resistance is at 0.9720, then again at 0.9875.  Above there, price can move to today’s high at 0.9989. 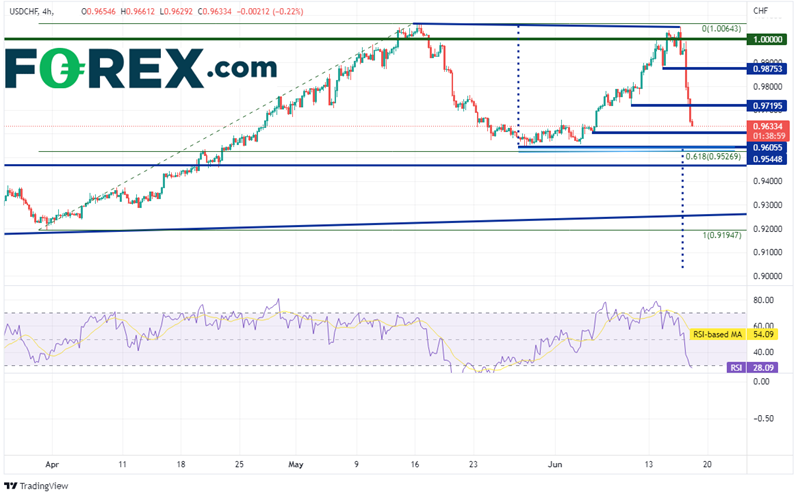 With the Swiss National Bank surprising everyone and hiking rates 50 basis points, the Swiss Franc went bid.  The central bank also said the franc is no longer overvalued; however, they stand ready to intervene in the fx market if necessary. USD/CHF lost 300 pips on the day.  Will the pair continue to move lower?  It may depend on whether the SNB considers a 300 pip move enough to make the franc “overvalued”.