Tech Wreck: S&P drops ahead of AAPL and AMZN results

Cracks are starting to re-appear in the stock markets after the recent recovery. Worries over stagflation, China’s ailing economy and more rate increases, as well as disappointing US tech earnings, are among the reasons keeping stock market bulls at bay. The tech sector remains a particular area of concern with Amazon (-4.3%) and Apple (-2.5%) shares dropping sharply ahead of earnings results. Facebook was down over 22% at last check.

The disappointing tech earnings from Facebook-parent Meta Platforms added to those we saw earlier in the week from Alphabet, Microsoft and Texas Instruments. Meta lost as much as a quarter of its value following its results, causing several investment banks to downgrade the stock.

Sentiment in the sector is understandably negative heading into the publication of Apple and Amazon results tonight. If these companies also fail to impress, then we could see carnage in afterhours trading and in index futures during the early Asian session on Friday.

At best, we could see only a modest further recovery in the event of a few earnings beats from here. But do remember that the bar is set quite low already. The devil will be in the detail. Any short-term spikes in stock prices as a result of a beat or two could get sold into, if the earnings are accompanied by warnings about sales.

Indeed, not only did Meta earnings missed, but the social media company also warned that they could remain under pressure from rising costs into 2023.

As my colleague Joshua Warner noted, “the strong dollar was a major headwind the quarter. In fact, if foreign exchange rates had stayed the same as last year, then Meta’s revenue would have been up 2% in the quarter,” rather than a fall of 4% to $27.7 billion (in line with estimates).

Together with Alphabet’s numbers last week, social media companies are clearly having a much tougher time amid softer demand for advertising. This is a reflection of an ailing global economy, hurt badly by rising price levels around the world for both companies and individuals.

It is a problem for a lot of companies around the world - something that will undoubtedly be echoed by most other companies that are set to produce their results.

We have seen a sharp drop in bond yields as investors have picked up safe haven government debt after their recent big falls. Concerns about the economy are rising by the day.

Although US GDP surprised with a 2.6% growth after two quarters of negative growth, it is worth pointing out that GDP is never an accurate indication of the current state of the economy, since they’re backward looking. A lot has changed for the worse if you look at the recent US macro pointers. Cracks are starting to appear. Core durable goods orders fell by 0.5% m/m, which was unexpected. Earlier in the week we saw the manufacturing PMI plunged into contraction in early October, while the services PMI also fell deeper below 50.0, as new orders were the weakest since Covid lockdowns. Additionally, the Richmond Manufacturing Index plunged to -10, while the CB Consumer Confidence slumped to 102.5 from 107.8 previously.

Europe and China on their knees

Elsewhere around the world, the Eurozone economy is on its knees, despite the recent drop in some energy prices. Data released so far this week have not bucked that trend, with the latest PMI data being particularly concerning. Disappointing data underscore the challenges the ECB faces at a time when inflation remains very high. They had no choice but to hike by 75 basis points today – given how much of a problem inflation is proving to be in the region. With the global economy slowing, and central banks having to tighten their belts further, it is difficult to see how stock markets would thrive in this sort of environment.

Meanwhile, concerns over the health of the world’s second largest economy are growing. China A50 index (CHN50) futures slumped around 2.5% today, to drop below the March 2020 low. Xi’s zero-covid policy is what has hurt the economy so dearly in recent times. While the rest of the world have moved on or learned to live with the virus, China is continuing to take no chances. Investors are worried that as a result of further, inevitable, flare ups of the virus, more lockdowns will be announced, causing even more pain for the people and economy.

The S&P 500 created a doji candle the day before after giving up it was earlier gains as the sellers stepped into defend resistance around 2883. This level was previously support and ties in with the short-term bearish trend line.

At the time of writing, investors were not sure what to do, and the index was displaying another doji-like candle. Is the bearish trend about to resume? 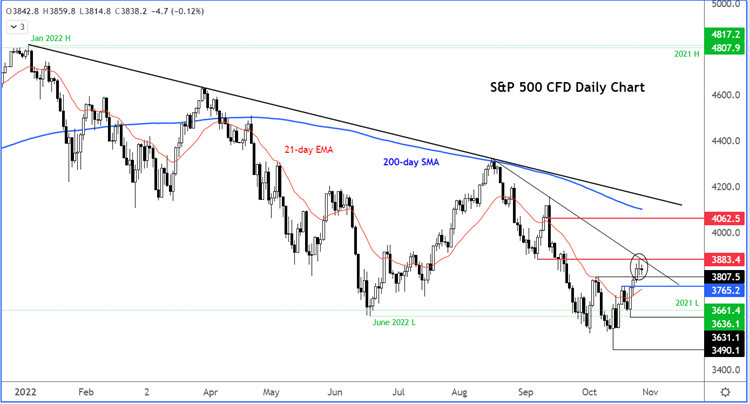 Well, a closing break back below 3806 would be the second bearish reversal sign that I am looking for, after Wednesday’s formation of the doji candle. Thereafter, it is all about whether the next support at 3765 will hold, or we go below it. If this level fails to hold as well then it is probably game over for the bulls again.

On the upside, a clean break above the 3883 resistance would tip the balance in bulls’ favour, which could then pave the way for an even larger recovery. We will cross that bridge if and when we get there…

But understandably, not many people are in the mood to buy stocks given what happened to Meta and some of the other mega caps, not to mention China, where the FTSE China A50 index futures fell another 2.5% to test the March 2020 low. It is all about those tech earnings, with Apple and Amazon to take centre stage after the bell.