Stocks drop but will Wall Street come to the rescue again?

Markets remain highly volatile. By mid-morning European session, the major European indices and US futures were at their session lows, after a late comeback on Wall Street on Wednesday failed to excite the bulls on this side of the Atlantic, not least because recession worries continue to grow as Eurozone retail sales and German industrial orders both fell more than expected. But will it be a day of two halves, like the day before? Will dip buyers step in again to defend recent gains as indices test short term support levels?

There are no major fundamental justifications for the stock market bulls to be aggressive buyers right now. This is why we are seeing the indices fail to show significant follow-through each time we have a bounce. There has been some speculation that the Fed is going to pivot and start easing its aggressive rate increases, following the footsteps of a couple of other central banks like the RBA. But bets that the era of central bank hawkishness has peaked is a dangerous game and hasn’t worked very well this year. We have repeatedly seen inflation data exceeding expectations and the Fed has correspondingly responded by being even more hawkish with its rate increases and language. The labour market has remained very hot until now, but following some weakness this week, investors are expecting the monthly non-farm employment report to disappoint expectations this time. But will the Fed be too concerned about one month’s worth of jobs data?

Following some speculation about the Fed potentially pivoting, yesterday saw the Fed’s San Francisco President Mary Daly and Bank of Atlanta President Raphael Bostic come out and insisted that they are committed to avoiding pulling back on hikes prematurely, echoing comments from many other FOMC officials that have recently spoken. Fed’s Charles Evans, Lisa Cook and Loretta Mester will be speaking later today. Expect more of the same tone from these officials.

European markets down more than 1%

In Europe, investors appear a lot less confident than they do on Wall Street, where dip-buying recused the major indices late in the day. But at the time of writing on Thursday morning, the major European indices had given up the entire gains made in the second half of yesterday’s session and were testing the lows from the previous session. Here, traders were weighing the impact of the renewed rise in oil prices on inflation, and as recession concerns intensified further on the back of some more disappointing data:

The above data points to weakness in demand and underlines expectations of a looming recession in the coming quarters. The energy price shock created by the Russian invasion of Ukraine continues to be the main driver behind the economic slump.

Will US investors come to the rescue again?

As we saw yesterday, Wall Street bulls came to the rescue by buying the dip which sent the major indices towards their session highs by the end of the session. As traders await Friday’s US jobs report and more direction from Fed speakers, I wouldn’t rule out another rebound here, even if, ultimately, I reckon that we will soon see new lows on the indices. But for now, the likes of the Nasdaq futures are testing their respective short-term support levels and so we may well see another bounce back.

For the Nasdaq the area around 11470ish appears to be an important pivotal zone. A bounce here is what the bulls will be eying, while the bears will want to see the index close below this level in order to trigger further technical selling below it. 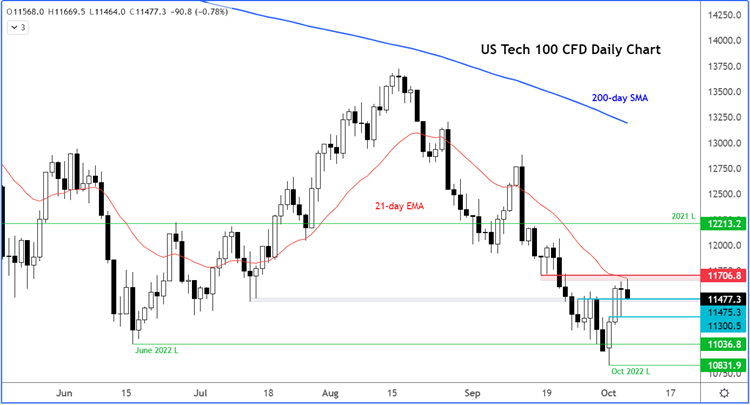