The major US indices were a tad higher earlier but have started to come off their best levels at the time of writing. Despite some positive earnings, stocks are not out of the woods yet. Fears over further tightening of central bank policy amid an environment of high-inflation and low-growth means investors will avoid buying stocks aggressively. Even at these relatively-inexpensive levels.

Both short- and long-dated bonds continue to press lower, lifting their yields higher. The US 10-year yield is now comfortably above 4%, which printed a fresh yearly high of 4.203% earlier. The 30-year yield also hit a fresh cyclical high. This happened as the Fed’s Harker reminded us that the central bank is going to continue pushing interest rates higher and higher. Harker said that inflation will be around 4% next year. If he’s correct, inflation will still be well above target and thus it would require policy to remain restrictive, rather than expansionary to offset a potential recession.

Earlier, sentiment was supported somewhat by a rally in some of the world’s largest technology companies thanks to decent earnings results from the likes of Netflix, IBM and AT&T.  However, Tesla disappointed with its sales.

It has been another bruising week in China where stocks and the yuan fell to fresh yearly or multi-year lows. China is apparently in deep trouble amid its zero covid policy. Remember that China decided to postpone, without giving a reason, the release of its third quarter growth and industrial production figures that were due for publication on Wednesday. Analysts think that economic growth there has slowed to a new three-decade low of 3.3% compared to 4.9% recorded in the same period a year ago. But the fact that China has delayed the release of the data does not look good and investors are worried that the world’s second largest economy may have performed even poorer than those expectations. If China is not doing well, this is not good news for the rest of the world. Its declining is a problem seen across many other parts of the world, too.

Whatever the outcome of earnings or macroeconomics, until the major indices start making higher highs and higher lows, I will continue to look for weakness and bull trap signs to emerge. I just don’t think right now – with interest rates continuing to rise – is the environment for a stock market rally. Granted, we will get bounces here and there, but it will all be inside the larger bearish trend.

Lower lows, lower highs = remain bearish until the charts tell us otherwise. Let’s see if the S&P will go back below the June low of 3636. If it does, this will likely invalidate the idea that the markets have bottomed. 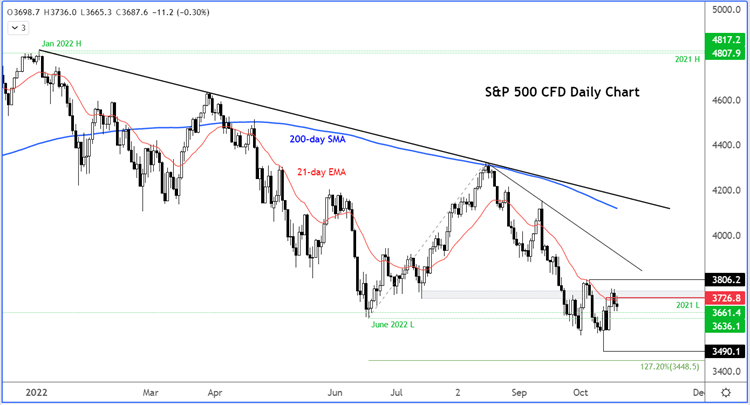