Despite the higher than expected increase in rates by the Riksbank, it failed to spark a bounce in the Krona, as USD/SEK approached its highest level since 2001. USD/SEK has been trading in an orderly upward sloping channel since June 2021 when the pair was near 8.2354.  On July 5th, 2022, the pair traded through the pandemic high from March 2020 near 10.5016.  However, it was short-lived as USD/SEK bounced off the top trendline and moved lower to test the bottom trendline of the channel on August 11th.  Since then, the pair has been moving aggressively higher back towards the top trendline of the channel.  In addition, today’s price action formed a bullish engulfing candlestick as the pair went to new highs.  However, notice that the RSI is diverging from price, making 3 higher highs in price and 3 lower highs in the RSI.  This is often viewed as a possible reversal signal. 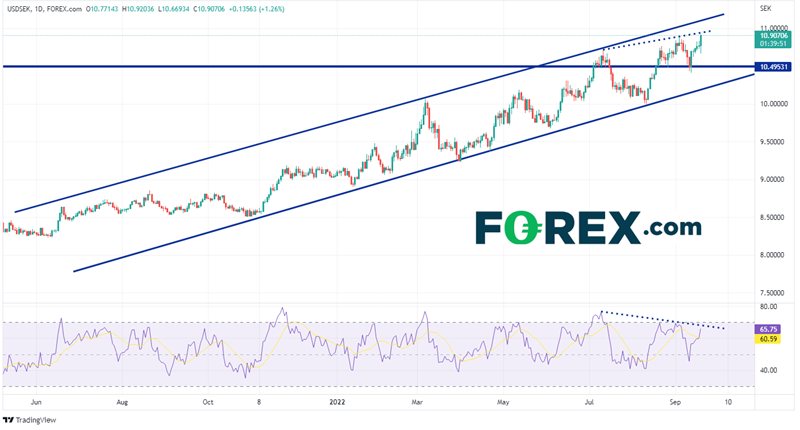 On a 240-minute timeframe, if USD/SEK continues to move higher, the first level of resistance is at the 127.2% Fibonacci extension from the highs of September 5th to the lows of September 13th near 11.0161.  Above there, price can run to the top trendline of the long-term channel near 11.1140 and then the 161.8% Fibonacci extension from the previously mentioned timeframe at 11.1800.  However, if the potential reversal signal on the daily timeframe plays out, the first support is at today’s lows of 10.6737, then the lows of September 13th at 10.4137. Below there is horizontal support at 10.267, just ahead of the bottom trendline of the long-term channel. 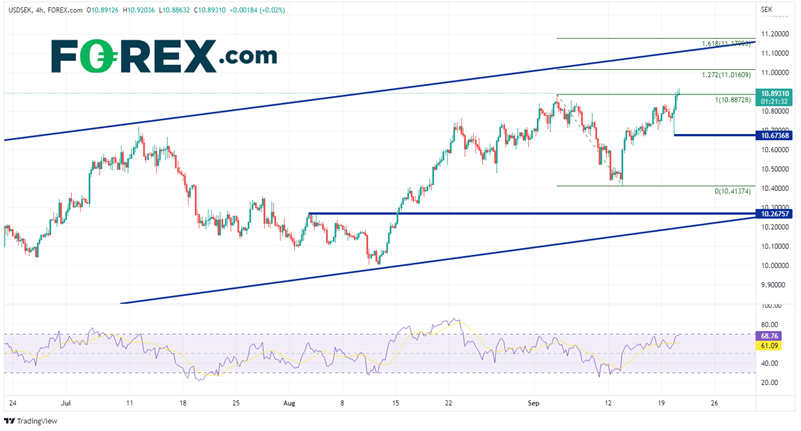 The Riksbank feels like it got burnt one to many times by not raising interest rates enough.  Therefore, it raised rates by 100bps today and said there is more to come.  In addition, the central bank revised its inflation forecast higher and said it would take until 2025 for it returns to 2%.  However, USD/SEK did not care, trading to its highest level in over 20 years!