The Dow could appeal to bullish (or contrarian) swing traders

This image will only appear on cityindex websites!

I suspect we’re at or fast approaching an inflection point for several markets – at least over the near-term. USD/CNH rose to within a cats whisker of 7.000 before reversing and Bitcoin bounced form a key support level. We also saw Wall Street rise around 2% whilst yields chilled out for once. When you see multiple markets reverse at or around support or resistance levels in tandem, it usually means something – regardless of whether fundamentals justify it or not. And that leaves the potential for a bounce of US equities, given its relatively deep pullback.

The Dow Jones has seen a relatively deep pullback against the rally from the June low, and there has been two false breaks of trend support over the past two sessions. Furthermore, a bullish engulfing candle formed yesterday which shows demand just above 3100. The stochastic oscillator is also oversold, although yet to general a traditional 'buy signal' by crossing back above 30. 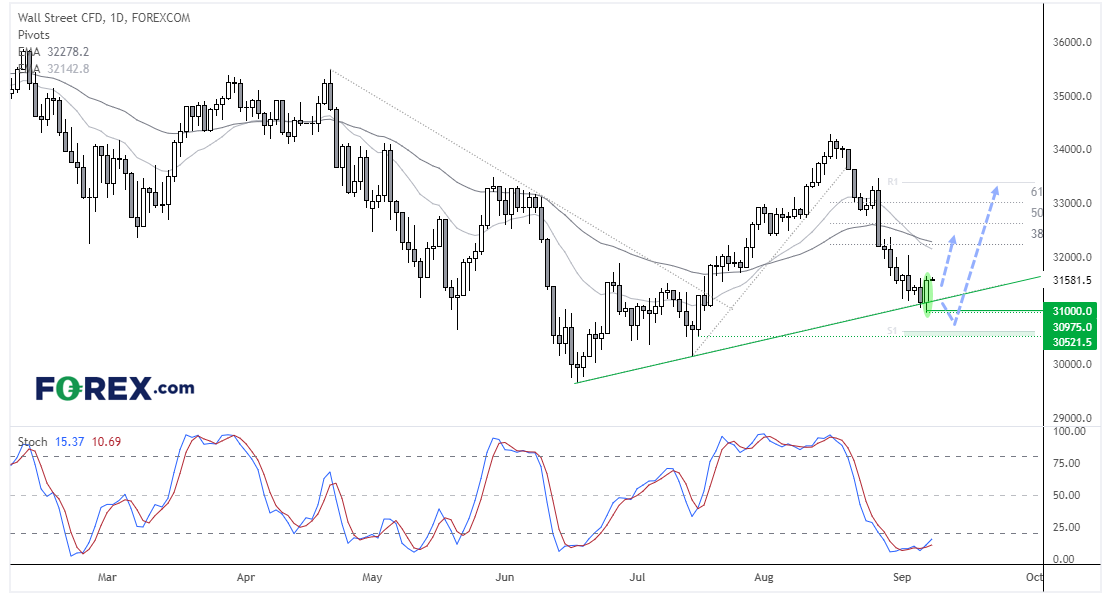 A rise in implied volatility can precede market troughs

The analysis on the DJI can be applied to the S&P500, where the obvious difference would be the key levels. But another piece for the bullish puzzle can be seen on implied volatility, which we have compared with the S&P 500.

Each time the ATM (at the money) options for the S&P 50 have risen to the 28-30 area it roughly coincided with a cycle low. It is not an excellent timing tool, but generally occurs ahead of the low – without giving a precise indication of how far ahead the low may be. But the recent spike is the most aggressive on the chart and, like the Dow, the S&P 500 is showing signs of a potential trough. Moreover, it also trades near the lower Bollinger Band. And, if we want to think bigger and bolder, wave 2's tend to be the deepest - and bullish rallies generally begin during times of uncertainty. Against that backdrop the Dow Jones (and US indices in general) become contrarian candidates for bulls. 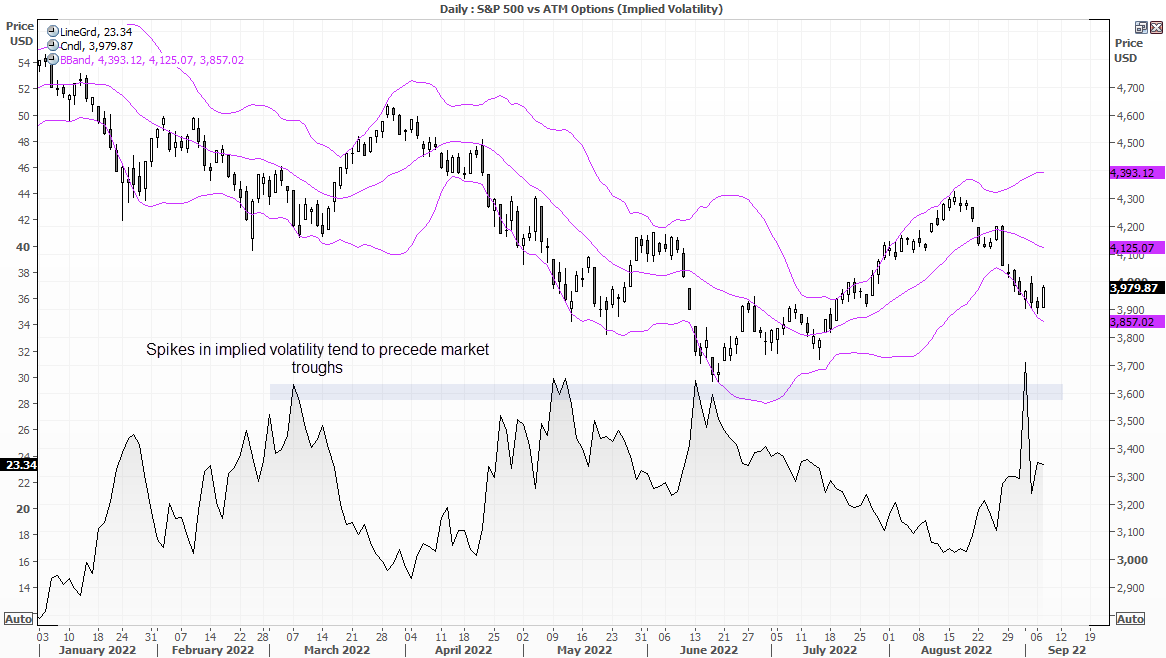 As for the Dow there are two potentially bullish scenarios to consider, depending on anticipated time horizon and appetite for volatility.

1 - For near-term longs: We'd like to see prices hold above yesterday's low and continue higher towards 3200 - 3250, before reassessing its upside potential. This approach requires a tighter stop and we're looking for a momentum / swing trade higher (sooner than later).

2 - For a 'longer-term' bullish setups: Perhaps the low is not yet but it is close. Instead, we see a volatile shakeout around current levels before a bullish move unfolds. In which case we'd want prices to remain above the 30,500 area (near a bullish engulfing candle from July) with a view for it to eventually break above the March high. This scenario allows for a wider stop and requires more patience.

However, with Jerome Powell speaking later today then we need to consider the alternative; he comes out swinging his hawkish bat and sends equities into a tailspin. But even then we need to consider where equities trade in relation to how anticipated such an event is. For example, if this was completely unexpected and equities traded at record highs then we could expect a larger (bearish) reaction. So if Powell hammers hope a 75pb hike (with more to follow) then perhaps we’ll see another leg lower, but remains debatable as to whether it will see it break to new cycle lows.