The pound is sent into the ground during thin Asian trade

The British pound was already facing heavy selling pressure on Friday when the UK’s new chancellor unveiled his new mini-budget. The plan has been perceived as a tax cut for the rich alongside higher levels of debt, with one former treasury minister calling Kwasi Kwarteng’s budget a “high-risk gamble”. The week closed with GBP/USD falling to just shy of its all-time low set in 1985. And that level did not last very long.

In today’s Asian session we have seen an aggressive selloff for the British pound, which has sent GBP/USD to a fresh record low. Currently down around -2.4%, its within its fifth consecutive down day, which includes a -3.6% decline on Friday. Such levels of volatility have not been seen since March 2020, and not restricted to GBP/USD.

It’s currently the most volatile month for GBP/JPY since November 2016 (Trump nominated president) and the most bearish month since June 2016 (Brexit). EUR/GBP has accelerated nearly 4% higher and sliced through 0.9000 like a hot knife through butter. And with higher levels of volatility come higher levels of implied volatility (IV). Overnight IV for GBP/USD has risen to an annualised rate of 34.45%, which is its highest level since December 2019. 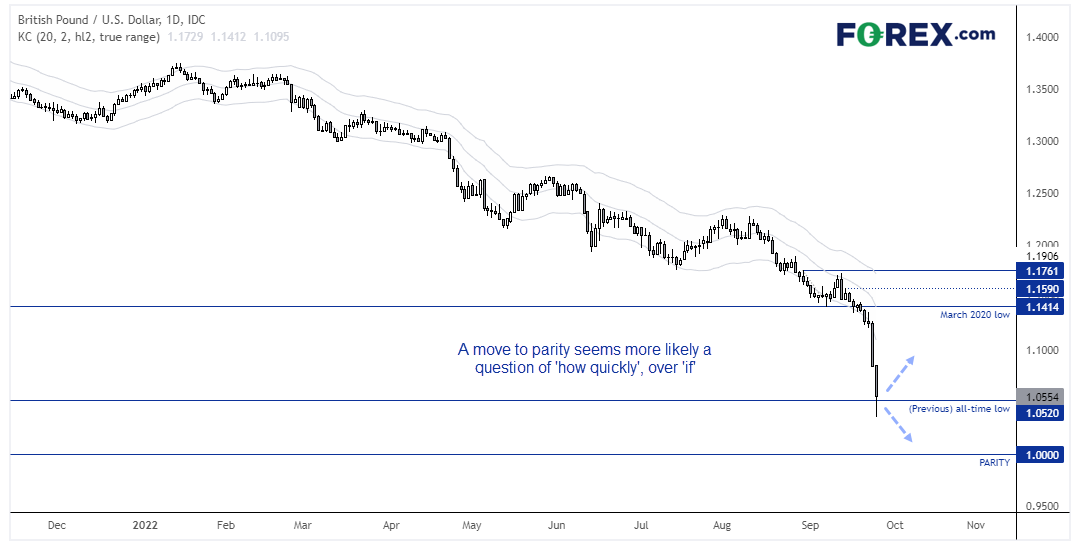 We can see on the daily chart that bearish momentum has accelerated since Friday, and that it sliced through the previous all-time low set in 1985. Moreover, it also sliced through the 1.05 and 1.04 handles like butter before rebounding back above the 1985 low, indicating that some large stops were triggered. Prices are now meandering around the 1985 low and seeking its next directional move.

The question now is whether we see a follow-through in the European and US session and hurtle towards parity - a level which seemed an impossibility just a few months ago. But if we see another day’s trade like we did today, GBP/USD will be trading firmly beneath it.