‘Tis the season to be quantitative: ASX 200

Santa’s rally is the festive name applied to the tendency for equity markets to rally in the final weeks of December. It doesn’t always happen, but it occurs frequently enough for the pattern to be quite apparent and can be seen as a nice little boost to sentiment ahead of the festive period.

How has the ASX 200 historically performed on a monthly basis?

To begin, we’ll look at how the ASX 200 has performed each month since inception. The ASX 200 was officially launched in March 2001, although the data set used includes artificially reconstructed data back to 1992 which provides a larger sample size to work with. Whilst statistical theory says we need at least 30 data points for a data set to be deemed ‘statistically significant’, we think 29 years is close enough, and it does provide some interesting patterns. 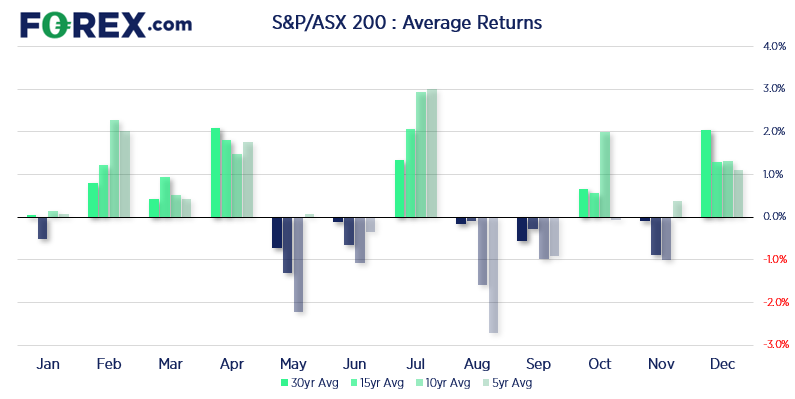 However, an average return doesn’t necessarily mean a higher probability of a positive month. Average returns hide outliers which can skew the data (for better or worse). Therefore we prefer to focus on months which have a higher ‘win rate’ (positive closes over 50%) alongside average positive returns.

This table shows the ASX ‘win rate’, which show the % of time the month has posted a gain.

If there was ever an example of a textbook Santa’s rally, this chart would be it. It displays the average performance of the ASX 200 throughout December.

A word of caution with seasonal charts

we should also point out that seasonal charts are not a roadmap to the future, as they are simply averages of the past. There will be some months that completely ignore their seasonal tendency, as global macro or index-specific micro themes crop up and become a key driver to push prices in unpredictable ways. Therefore, this information should be filed under ‘nice to know’ and simply used to complement one’s own analysis whether it be technical or fundamental analysis. Besides, at the time of writing we have the new covid-19 variant to contend with which has the potential to unhinge the global recovery and drag equity markets down with it.

It looks like the ASX 200 could be headed for a strong close today. Monday’s decline was quick to reach our target around 7200, and its low found support at the 200-day eMA before reversing to print a potential ‘buyers tail’ by yesterday’s close. Prices rallied form today’s open and a close above 7300 would be constructive indeed.

If it were to close the week around current levels it would form a bullish hammer on the weekly chart, so anything above current levels makes it appear the more bullish heading into next week. For now our bias remains bullish above this week’s low, but with covid headlines likely to weigh on sentiment then we’ll allow for some choppy trade (unless the new variant doesn’t lead to restrictions).