US PPI for April was 11% YoY vs 10.7% YoY expected and a reading of 11.2% YoY for March.  In addition, the core PPI for April was slightly weaker than expectations at 8.8% YoY vs 8.9% YoY expected and 9.2% YoY in March. Recall that March’s reading was the highest reading ever. This follows a similar release to yesterday’s CPI print, in which the headline print was stronger than expected, though still weaker than the previous month’s number.  Does that mean that the US has reached peak inflation?  It really doesn’t matter right now.  The Fed targets 2% inflation.  Recall that yesterday’s headline CPI print for the US was 8.3% YoY vs 8.1% YoY expected and 8.5% YoY in March, which was the highest reading in 40 years.

The US Dollar Index reached a new near-term high overnight as inflation fears continue to swell, thus creating a risk-off environment.  After consolidating for the last 2 weeks near 103.80, price spiked higher taking out stops along the way to an overnight high of 104.72.  The next resistance level is that the 161.8% Fibonacci extension from the highs of April 28th to the lows of May 5th, near 104.90.  Above there and price can trade to horizontal resistance from September 2002 at 105.41.  However, notice that with this move higher, it has brought the RSI back into overbought territory, indicating the possibility for a reversal.  Support is at today’s low of 103.88.  Bellow there, price can fall to the lows from May 5th at 102.35. 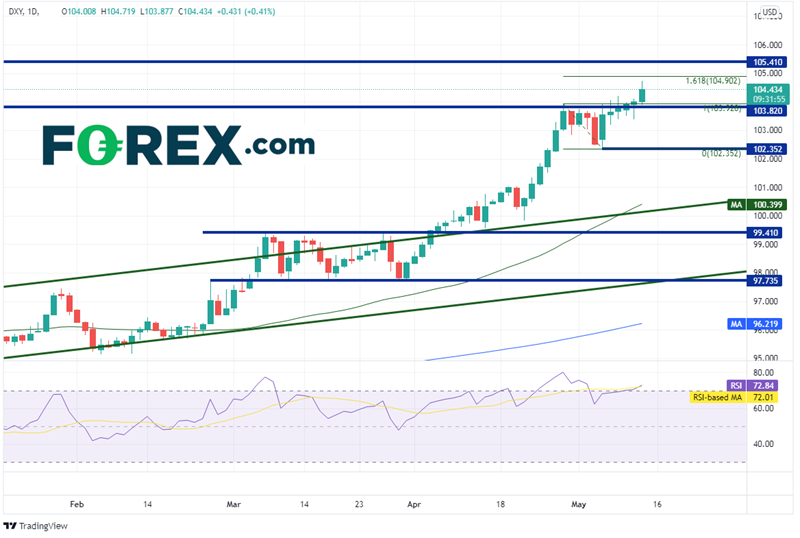 As a result of a higher DXY, EUR/USD has moved lower.  Yesterday we discussed how a number of ECB officials have begun to talk about rate hikes in the coming months. That may have been what was holding EUR/USD above the 1.0470 level.  However, it wasn’t enough to hold the pair.  Thus far, EUR/USD has traded to an intraday low of 1.0383 today.  Support is at the 161.8% Fibonacci retracement level from the lows of April 28th to the highs of May 5th near 1.0365.  Horizontal support crosses just below there at 1.0340 from 2017.  Under there, EUR/USD can fall all the way to 1.0000 before the next support level.  However, notice that the RSI has moved into oversold territory and is diverging with price, an indication that the pair may be ready to bounce.  Resistance is at the previous support level of 1.0471, then the highs from May 5th at 1.0642. 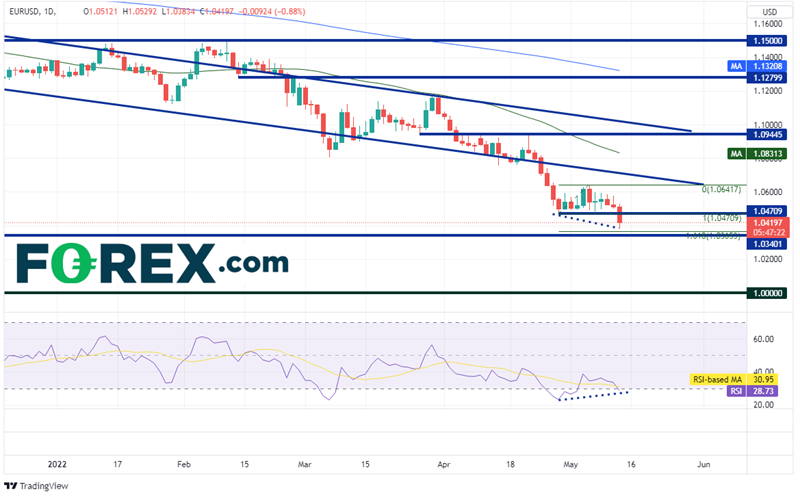 Although PPI was lower than the previous months reading, it did little to soothe investor fears of rising interest rates, as the print was better than expected. One reading isn’t a trend, but one has to consider that the peak in inflation may be in.  Watch for a possible short-term correction in EUR/USD if the US Dollar pulls back or if the ECB hawks continue to hit the wires.