EUR/USD parity: what would currency parity mean for traders?

As the euro nears parity with the dollar, it’s sparked conversations over what it could mean for the global economy and FX traders. Learn how the economic theory of parity influences FX trading strategies.

What is currency parity?

Currency parity is when the exchange rate of two currencies reaches equality, so that a sngle unit of one could be traded for a single unit of the other. For example, €1 could buy $1.

In the forex market, price parity is commonly used to assess whether currencies are over or under valued. It’s most known as the theory of purchasing power parity.

Purchasing power parity is an economic theory that compares the economic productivity and living standards of two countries using a basket of goods and services. The idea is to establish which currencies are over and undervalued, as eventually they will reach parity over time.

In the case of EUR/USD, this has resulted in a lot of short positions being opened on the euro as the eurozone economy weakens.

Using purchasing power parity returns mixed results over the short-term, as it can take a long time for currencies to reach parity. Currencies can stay over or undervalued for years, so for day traders it should form just one part of their strategy.

Will the dollar and euro reach parity?

The dollar and euro are on the verge of currency parity for the first time since 2002. The euro has been depreciating against the US dollar for over a year, but it hit $1.03 in early July, sparking conversations about whether parity will be reached.

The euro’s decline has been spurred on by the divergence of monetary policy between the two economies, leading to a larger interest rate differential.

While the Fed’s previously low interest rates had helped keep the euro above the dollar, the Fed has now started raising interest rates to rein in inflation. But the European Central Bank has yet to hike rates despite record inflation hitting the eurozone – largely due to fears rate rises could cause another debt crisis.

This has lifted the dollar against the euro – as well as other global currencies. 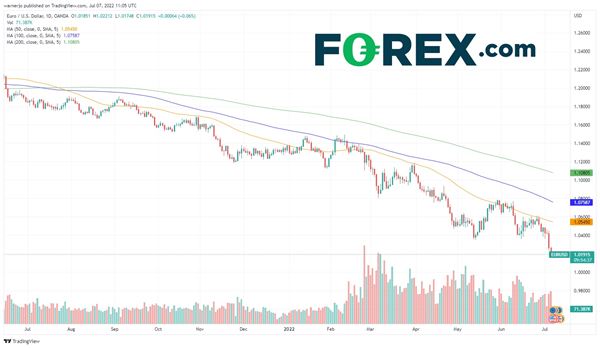 What happens if EUR/USD parity is reached?

If EUR/USD parity is reached, it’s unlikely much will change in the short-term for the European Central Bank. Analysts still expect the ECB to leave rates unchanged, or lift interest rates less aggressively than the Fed. If the ECB does hike rates, it would mark its first increase since 2011.

But the Federal Reserve could take action and slow down its monetary tightening. Many have already remarked that the dollar index is too high – up 8% since the start of the year thanks to safe-haven inflows.

You can speculate on EUR/USD and other global currency pairs with FOREX.com in just four easy steps:

Or you can try FX trading risk free by signing up for our demo trading account.