What will happen to GBP/USD if the UK surprises with higher CPI?

Earlier today, the US released its August CPI report.  The headline print was 8.3% YoY vs and expectation of 8.1% YoY and a July reading of 8.5% YoY.  Headline inflation is decreasing.  However, the Core CPI print for August was 6.3% YoY vs an expectation of 6.1% YoY and a previous reading of 5.9% YoY. See our complete recap of the US CPI here.  After the release of the data, the US Dollar shot higher, pushing GBP/USD lower by nearly 150 pips near 1.1530.

Can a similar situation occur tomorrow for the UK when it releases its own August CPI data?  The headline print is expected to be 10.2% YoY vs a July reading of 10.1% YoY.  In addition, the Core CPI is expected to be 6.3% YoY vs a 6.2% YoY reading in July.  August’s reading was the highest since February 1982!  However, the BOE has already told us that it expects CPI to reach as high as 13% in October and that the UK economy will enter a recession in Q4.  Therefore, unlike that of the US in which the Fed is not expecting a recession, higher CPI readings shouldn’t do as much damage to the GBP or the FTSE, as markets are already pricing in an element of higher inflation and lower growth.

This is one reason that GBP/USD has been so weak over the last year.  It was just on April 22nd when GBP/USD broke below the psychological round number support level at 1.3000.  Since then, GBP/USD has been moving lower in an order channel.  On September 7th, GBP/USD traded 4 pips below the March 2020 lows to 1.1405, a new 25 year low.  It was also support at the bottom trendline of the channel and the 161.8% Fibonacci extension from the lows of July 14th to the highs of August 1st.  The RSI was oversold, and price bounced to resistance at the July 14th low, near 1.1760.  However, after today’s CPI data, GBP/USD formed a bearish engulfing candle on the daily timeframe, which indicates that there may be more selling ahead! 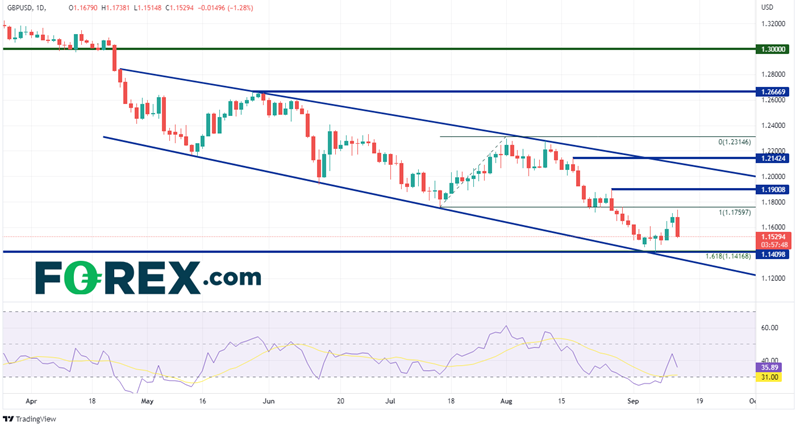 On a 240-minute timeframe, GBP/USD has been moving lower in a tighter channel formation since August 10th.  The pair broke out above the top trendline of the channel on September 12th and traded to the previously mentioned horizontal resistance.  Today, GBP/USD dropped back into the channel after the US CPI data.  First support for the pair is at the lows of September 7th at 1.1405.  Below there, price can fall to the 127.2% Fibonacci extension from the low of September 7th to the highs of September 12th at 1.1314.  This level also confluences with the bottom trendline of the longer-term channel (see daily).  The third level of support is at the bottom trendline of the shorter-term channel near 1.1250.  However, if prices reverse and move higher, first intraday resistance is at 1.1663, then today’s high and horizontal resistance at roughly 1.1740.  Above there, GBP/USD can move to the highs of August 22nd at 1.1901. 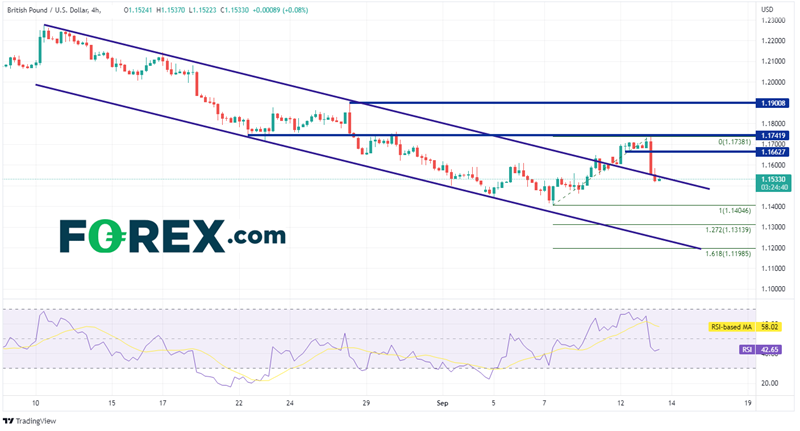 The UK releases August CPI tomorrow.  Expectations are for a headline print of 10.1% YoY and a Core CPI print of 6.4% YoY.  If the data is stronger than expected, will GBP/USD move higher?  It may, but most likely not to the extent that the US Dollar did after the stronger US CPI.  The BOE, which is expected to hike 75bps next week, already warned markets of a potential 13% CPI reading in October and a recession beginning in Q4.  Therefore, markets have been pricing in a potential higher inflation reading since the last BOE meeting (and GBP/USD is still much lower!).