When will AstraZeneca release Q1 2022 earnings?

AstraZeneca is scheduled to publish first quarter earnings on the morning of Friday April 29.

Analysts are expecting AstraZeneca to report a 50% year-on-year rise in revenue in the first quarter to $10.98 billion and core earnings per share is forecast to rise 3.5% from last year to $1.69.

The topline surge will reflect the addition of Alexion Pharmaceuticals after the company completed its major acquisition in July 2021, propelling AstraZeneca into a new sector concentrating on developing medicines for rare diseases.

Alexion has provided AstraZeneca with access to a new market to build on its existing expertise in oncology, cardiovascular and renal treatments as well as respiratory and immunology. The company believes there is a big opportunity in rare diseases that currently have little-to-no options in terms of treatment. AstraZeneca says there are over 7,000 recognised rare diseases known today but that only 5% have treatments approved by US regulators, which are regarded among the leading pharma watchdogs in the world.

The strong revenue growth will also be aided by its Covid-19 jab. AstraZeneca sold just under $4 billion worth of its Covid-19 vaccine Vaxzevria in 2021, having failed to gain the same momentum as more popular jabs developed by the likes of Pfizer and Moderna. Demand for Covid-19 vaccines has waned in countries that have reopened their economies and more sales are shifting toward lower-income countries where sales are not as lucrative, and analysts currently believe AstraZeneca will only sell $2.25 billion worth of jabs in 2022 – and $1.00 billion of that is pencilled-in for the first quarter.

Although sales of its vaccine are waning, this is being countered by rising sales for its Covid-19 antibody cocktail named Evusheld designed to treat people who already have the virus. The new drug managed to contribute $85 million in sales before the end of 2021 but that is expected to increase significantly in the first quarter to $438.5 million. Consensus figures currently believe it can sell $1.16 billion worth of the drug in 2022 as a whole.

Importantly, AstraZeneca said it would be breakdown the sales of a new division starting in the first quarter. This will be named BioPharmaceuticals and will home its vaccines and immune therapies, including its Covid-19 jab, Evusheld and other drugs. Notably, some media reports have suggested this is a step toward AstraZeneca spinning-off the unit into a newly-listed business at some point in the future. The business does stand out in AstraZeneca’s portfolio, particularly the bit geared toward Covid-19 as it offers significantly different economics to its other treatments.

The outlook for the remainder of the year will be under the spotlight. AstraZeneca is currently aiming to grow revenue by a high-teens percentage and core EPS by a mid-to-high twenties percentage in 2022. Markets believe it can deliver that, with consensus figures pointing toward topline growth of 17% and a 26% rise in core EPS this year. However, some believe its conservative estimates for Vaxzevria and Evusheld could lead to an upgrade this year, providing a potential catalyst for the stock going forward.

On the downside, China remains a concern after AstraZeneca warned revenue would decline by a mid-single digit in 2022. AstraZeneca is one of the largest foreign drugmakers operating in the country but has seen sales impacted by regulatory changes such as the Volume-Based Procurement programme that aims to bring the price of generic drugs down and the newer initiative introduced last year, the National Reimbursement Drug List, which has opened the door for more sales of drugs for the likes of rare diseases, albeit at significantly lower prices.

Rising costs could pose a threat to its earnings guidance but pharmaceutical companies are better positioned to pass on higher costs and navigate the inflationary environment than most. AstraZeneca has said core operating costs will increase by a low-to-mid teens percentage in 2022 but this is mainly down to the integration of Alexion’s cost base.

The company raised its annual dividend back in February to demonstrate its confidence about its ability to keep growing and generating cash going forward.

Where next for AZN stock?

AstraZeneca shares have taken a breather since hitting fresh all-time highs of 11,000p earlier this month, having suffered a 5% fall to trade at 10,368p today.

The RSI remains in bullish territory and is supported by a small uptick in trading volumes over the last 10 days. The fact the 50-day moving average has diverged higher away from the longer-term metrics also reinforces the view the stock can climb higher. The first upside target is the 10,608p level of resistance seen earlier this month, which is the only level that needs to be cleared before AstraZeneca can target fresh all-time highs.

The 31 brokers that cover AstraZeneca remain bullish on and have a Buy rating on the stock, although the average target price of 10,627p suggests there is only 2.5% potential upside from current levels and that the stock could struggle to hit a new high over the next 12 months. This also implies that there is more downside risk compared to potential upside right now.

AstraZeneca shares are trading markedly above all three moving averages compared to what has played out in recent years and we could see the stock fall back toward these levels, first to the 50-day sma at 9,686p and then to the 2021-high of 9,444p. The 200-day sma, currently at 8,852p, has acted as the bottom level of support for the stock for almost a year and this should continue to be regarded as the ultimate floor for shares going forward. 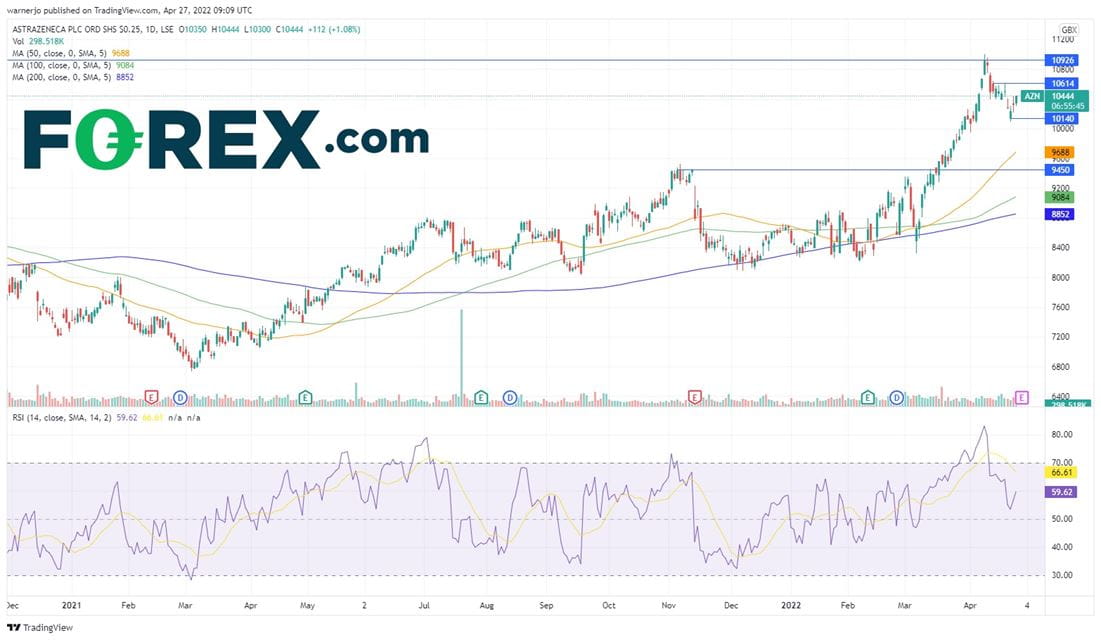 How to trade AstraZeneca stock

You can trade AstraZeneca shares with Forex.com in just four steps: