Bank of America Q1 preview: Where next for BAC stock?

When will Bank of America report Q1 2022 earnings?

Bank of America will report first quarter earnings before US markets open on Monday April 18.

Bank of America delivered record earnings in 2021. Its Consumer arm added millions of new credit card and checking accounts thanks to a rise in engagement online, its Wealth Management division reported record client flows and its strongest customer acquisition numbers since the start of the pandemic, while active markets, particularly in Equities, helped drive record-setting years for its Investment Banking and Global Markets units.

Earnings will come under pressure thanks to tough comparatives from the year before, when its profits were boosted by the release of reserves set aside for potentially bad loans during the pandemic. Bank of America is expected to continue unwinding provisions and reserves, and the level released will help markets gauge how confident the bank is feeling about the economic outlook considering the number of uncertainties lingering over the next 12 months. Consensus numbers from Bloomberg suggest its bottom-line will be boosted by the release of $350 million worth of provisions in the first quarter, but that will be down from the $1.9 billion released a year earlier and the $500 million benefit booked in the fourth quarter. Notably, JPMorgan revealed it started building reserves again in the first quarter due to huge uncertainty spawning from rampant inflation and the war in Ukraine.

Bank of America is expected to see its net interest margin improve for a third consecutive quarter to 1.71%, which is set to drive net interest income to $11.6 billion, up 14% from the year before and up from $11.4 billion in the previous quarter.

Consumer Banking is forecast to experience a 0.9% year-on-year decline in net income to $2.7 billion. Particular attention will be paid to lending after the bank delivered impressive sequential loan growth in the previous quarter, driven by growth from consumers and an even greater uptick from businesses.  Bank of America’s lending operations are more geared toward businesses compared to some of its rivals that are more focused on consumer credit cards. Markets will be watching the bank’s outlook for loan growth and whether recent momentum has kept going.

Costs will also be on the radar as they rise across the industry. The bank’s compensation fees rose markedly in 2021 following the record year, while non-interest expenses also continued to climb. Compensation fees are set to decline 3.2% year-on-year in the first quarter and non-interest expenses is set to fall to $15.2 billion from $15.5 billion the year before, although that will be up from $14.7 billion in the previous quarter. An outperformance on costs would be well-received by markets as investors are hoping it can keep a lid on expenses to protect profitability until higher interest rates come into play later this year.

Where next for BAC stock?

Bank of America shares have lost almost 16% in value since the start of 2022 and the latest leg of the downtrend that began in late March remains intact.

This is reinforced by the bearish RSI. However, trading volumes have waned over the last five days compared to the 100-day average and the RSI is on the verge of entering oversold territory, which has prompted a reversal in the past. This supports the view that the seven month low hit in March of $38.20 can hold as a floor for the stock to avoid bringing in the next downside target of $37.50.

If the floor holds, then shares need to recapture the 50-day and 200-day sma that has converged at $43.40 to install confidence it can find higher ground and target the 100-day sma at $44.50, broadly in-line with the March-high. The 28 brokers that cover the stock see huge upside potential and believe Bank of America can surpass $50 a share over the next 12 months – in-line with the all-time high hit in February. 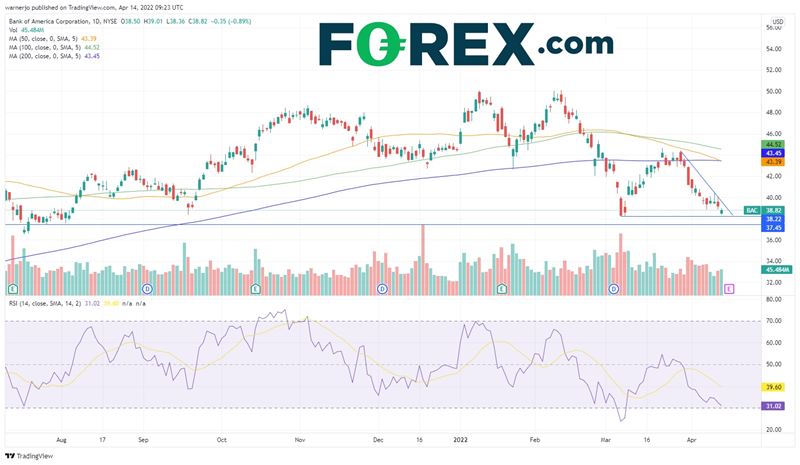 How to trade Bank of America stock

You can trade Bank of America shares with Forex.com in just four steps: