Lucid Group Q4 preview: Where next for Lucid stock?

Its is still early days for Lucid Group and the focus remains on the company’s huge potential rather than its current earnings power considering it only started producing its first electric vehicle, the Lucid Air, in September.

The model has grabbed attention as it boasts one of the longest ranges of any electric car in the market. In fact, the Lucid Air Dream edition has been independently verified to have the longest range on the market at 520 miles on a single charge – snatching the title that was previously held by Tesla. Lucid’s CEO Peter Rawlinson has already said the company aims to ‘define the brand as the range king’ while also making its cars more affordable to encourage mass adoption.

Deliveries began in October. While consensus figures suggest revenue will remain negligible in the fourth quarter, investors will be eager to find out how many cars the company managed to deliver before the end of 2021. Notably, Lucid Air is already selling its EV battery systems and powertrains to other companies, including all of the teams participating in Formula E.

That pushes the focus onto what to expect in 2022, with Lucid having previously said it is aiming to manufacture 20,000 vehicles this year that would be worth some $2.2 billion in revenue. Lucid said it had around 17,000 orders on its books in mid-November and this should have also continued to grow in the final six weeks of 2021 and into 2022.

However, Lucid Group may have hit a snag with its initial batch of deliveries after reports surfaced this week that the carmaker has already had to recall 203 of its vehicles because of a possible safety issue. This seems like a cautious decision considering Lucid is recalling all of the vehicles even though it believes only 1% of them will be affected by the issue, which is caused by the improper installation of the front strut damper that forms part of the suspension.

Lucid’s factory can currently produce around 34,000 cars per year but that is already being expanded and should have capacity to make up to 90,000 cars each year by the end of 2023. That will provide the capacity needed as Lucid continues to rake-in more orders in the US and begins expanding internationally. It opened its first retail store in Canada during the fourth quarter and plans to enter EMEA in 2022 and then China in 2023. The additional headroom will also allow it to introduce the Grand Touring, Touring and Pure versions of the Lucid Air in 2022 – all of which will be offered at lower prices to widen appeal - and its second model, the Gravity SUV, in 2023. Over the longer-term, Lucid is expecting to have capacity to create 500,000 cars per annum by the end of 2030.

The financials will therefore not be the primary focus. Still, its net loss at the bottom-line is expected to come in at $414.0 million in the fourth quarter, or at $0.35 per share. For the full year, Wall Street believes Lucid Group will report a net loss of $2.93 billion, or $1.42 per share. That would compare to the $719.4 million loss reported in 2020.

One area of the financials investors will be keeping an eye on is cash burn. Lucid Group has already outlined a path to profitability and believes it can turn positive Ebitda in 2024, although it has warned it won’t generate positive free cashflow until 2025 at the earliest. With that in mind, Lucid reported a free cash outflow of over $1.0 billion in the first nine months of 2021 and ended September with $4.8 billion in cash, which should be enough to fund the company ‘at least through 2022’.

The bulk of its cash balance, around $4.4 billion, was secured after Lucid Group secured the investment made into the business after completing its SPAC deal last July. This will be only the second set of quarterly earnings to be released by Lucid since it went public.

Where next for LCID stock?

Lucid shares closed at their lowest level in over four months yesterday at $23.97. Sellers have been winning the battle and causing a downtrend since the start of December, with the stock having lost more than half of its value in the past three months.

The fact the 50-day sma has recently crossed back under the 100-day sma and the RSI remains firmly in bearish territory suggests there is further room for the stock to fall. The break below $24.00 is significant and we could see shares continue to drift toward the $22.50 level of support last seen in mid-October. Any break below here opens the door the $19.90 level of support-turned resistance that came into play last September.

On the upside, declining volumes suggest the current downtrend is losing steam. The average volume at time over the past 20 days of 33.0 million compares to the 100-day average of 59.5 million. The 10-day average has fallen further to 26.8 million. The stock first needs to recapture the February high and close above $30 to signal a potential move higher. Beyond there, it can target the 50-day sma at $35 and the 100-day sma at $36. A move above here would be significant as it brings the 2022-high of $48 into play. 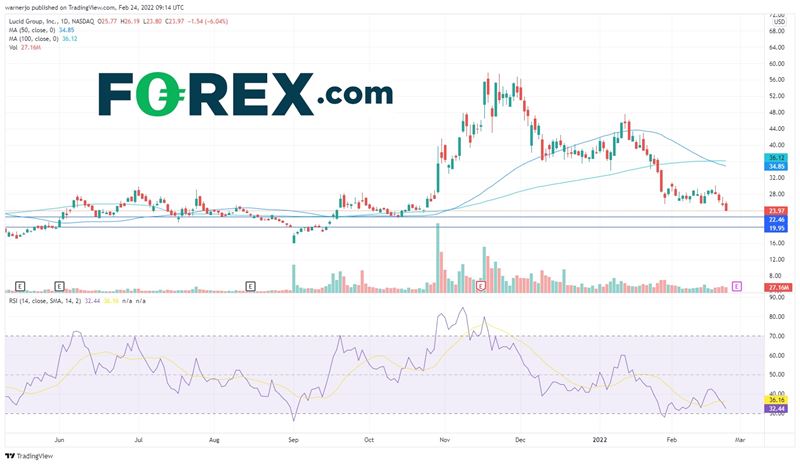 How to trade Lucid stock

You can trade Lucid Group shares with Forex.com in just four steps: