Micron Q2 preview: Where next for MU stock?

When will Micron release Q2 earnings?

Wall Street forecasts Micron will report a 21% rise in revenue to $7.55 billion from the $6.23 billion delivered the year before, with adjusted EPS to more than double year-on-year to $1.98 from $0.98. Both estimates are just above the middle of the guidance range provided by the company.

Growth is being driven by the release of its latest DRAM and NAND technologies and new products for the datacentre, mobile, graphics and automotive industries as the adoption of new tech from 5G and artificial intelligence to electric vehicles continues to fuel demand for its chips.

The global chip shortage has sent a wave of disruption upon all sorts of tech-heavy industries, but the story has been different for memory chips that are made by Micron. They are one of several essential parts for hardware, alongside other forms of chips like Graphic Processing Units (GPUs) that provide visual displays and microprocessors that act as the central hub for controlling a device’s functions. These are the sorts of chips that companies have been scrambling for as a combination of higher demand for tech and constrained supplies thanks to Covid disruption causes a crunch. However, when companies that manufacture computers, smartphones and other devices saw a shortage on the horizon, they decided to hoard memory chips as a preventative measure.

With that in mind, many manufacturers were left with plenty of memory chips but not enough of the other components it needs to build devices. This means demand is partially reliant on how the shortage in other chips and components pans out going forward. However, these inventories are unwinding, and Micron said in the last quarter that it expected demand for memory chips to be in-line with industry demand during calendar 2022, with expectations for shipments to pick up in the second half as wider supply issues ease.

Micron has said its newest chips are achieving ‘excellent yields’, which has contributed toward the fact Micron has significantly improved its adjusted gross margin to 47% in the last quarter from just 33% two years earlier. This is expected to dip to 46% in the second. Notably, consensus figures suggest Micron could be posting a margin above the 50% threshold by the end of the current financial year depending on the level of PC demand and if prices can remain resilient. Micron’s new chips means the company is ‘several quarters ahead of the industry’ which should provide it an edge in terms of pricing at least in the short term.

The outlook for the third quarter will be key in deciding how markets react to the results. Analysts are expecting Micron to deliver 10.5% year-on-year growth to $8.2 billion and a 18.6% rise in adjusted EPS to $2.23. Micron has already said it is on course to report record revenue and robust profits this financial year and Wall Street currently believes the company is on course to deliver 18% revenue growth and grow earnings by over 51% in the 12 months to the early June.

Will the CHIPS Act provide new catalyst for semiconductor stocks?

One potential catalyst for US semiconductor stocks to watch is the proposed CHIPS Act that is currently being debated. The bill proposes provision of $52 billion worth of subsidies to the industry to encourage them to build more factories in the US as the country looks to step up competition with China. It is currently being bogged-down by disagreements about other provisions in the bill that are also aimed at making the US more competitive.

It could be a key catalyst for the industry and give them the clarity and financial support needed to make significant investment within the US. For example, Intel has already pledged to spend around $20 billion on two new plants in Ohio but has said this could be expanded to eight plants worth $100 billion if the CHIPS Act is approved, and Micron is also waiting to find out what happens before deciding how much of its $150 billion global investment over the next decade should be funnelled into the US.

Micron shares have proven highly volatile during the past 16 months, trading within a wide channel between a low of $66 and a high of $97.

The stock last closed at $75.65 and has unsuccessfully tested the 200-day sma at $79.50 during the last week. This is the first upside target it needs to clear to install confidence of a move higher, toward the 50-day and 100-day moving averages that are converging around the $84.50 mark. Beyond there, the channel ceiling of $96.50 comes into play before it can consider climbing to fresh all-time highs.

On the downside, we may see shares fall back to the 2022-low of $68 if the stock continues to drift lower as it has done in recent days, but the 2021-low of $66 is a more significant floor that has to hold to avoid opening the door to sub-$60.

We are likely to see the stock continue to drift within the existing channel that has contained the stock since December 2020. The stock has failed to break out of the channel despite rising trading volumes over the last 100-days, supporting the view that the current pattern will continue. The RSI remains in bearish territory to suggest it could remain under some pressure in the short-term after sliding over 3% over the last five trading sessions. 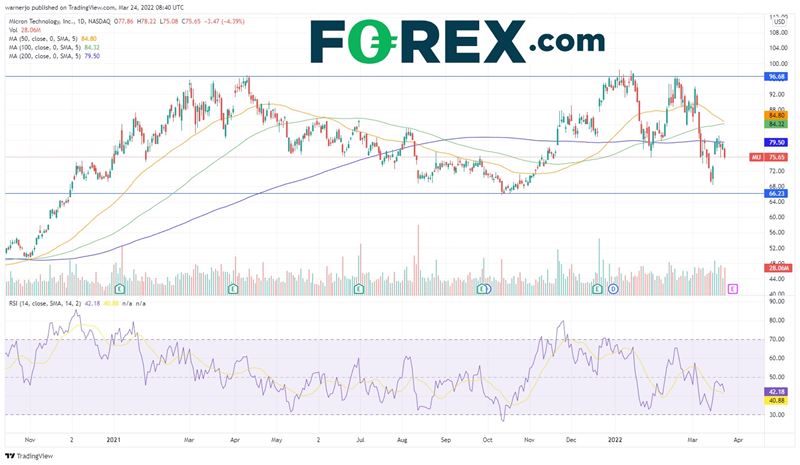