Microsoft Q3 preview: Where next for MSFT stock?

When will Microsoft release Q3 2022 earnings?

Microsoft is scheduled to release results covering the third quarter of its financial year after the markets close on Tuesday April 26.

US earnings season gets into full swing this week and Big Tech dominates the corporate calendar. Alphabet is due to report on the same day as Microsoft, while Meta will follow on Wednesday before Apple and Amazon round things off on Thursday.

Microsoft’s last quarterly update saw the company round-off a record year for revenue and earnings as sales of its cloud-computing services, software and range of hardware from computers to games consoles continued to grow at double-digit rates. It also posted a buoyant outlook when it said its ‘differentiated market position, customer demand for our high-value hybrid and cloud offerings, and consistent execution’ will ‘drive another strong quarter of revenue growth’ when it releases its next set of results.

Wall Street forecasts Microsoft will report an 18% year-on-year rise in revenue in the third quarter of its financial year to $49.1 billion and post a 12% increase in diluted EPS to $2.19.

Importantly, Microsoft said its outlook for this quarter did not include any contribution from its acquisition of AI outfit Nuance Communications, but this deal closed in early March so it will contribute to the company’s results.

Microsoft’s core cloud-computing division named Intelligent Cloud is expected to remain the key driver of growth in the period as businesses continue to digitise their businesses and shift their operations online. Analysts believe the unit can report 25% year-on-year growth in revenue to $18.9 billion. That growth will be broadly in-line with what it delivered last year, implying demand is holding-up despite tough comparatives and that the cloud-computing division is demonstrating particular strength. While the fundamentals remain strong, markets believe this unit will see revenue growth slow to below 22% year-on-year for the first time since the start of the 2020 financial year in the final quarter of the current financial year.

Productivity & Business processes, which includes its Office software, Dynamics 365 and its LinkedIn social network, is expected to report its third consecutive quarter of slower topline growth with analysts forecasting a 16.5% rise in revenue to $15.8 billion. There are some concerns that people and businesses could cutback on software and the likes of premium job-hunting plans as purse-strings are tightened this year and growth is forecast to slow even further in the final quarter of the financial year.

The third and final unit that homes Microsoft’s range of hardware from phones and computers to its Xbox gaming consoles, More Personal Computing, and is also expected to post its slowest revenue growth in three quarters at just 9.9% to $14.3 billion as it continues to be held back by the chip shortage and other supply chain headwinds, and that too is set to see growth grind to its slowest level in over two years in the fourth quarter. It is worth noting that Microsoft will introduce a new catalyst to its gaming network when it completes the $68.7 billion acquisition of Activision Blizzard in the 2023 financial year assuming the pair can continue to clear a number of regulatory hurdles.

The hardware part of the business is the most exposed to any cutback in consumer spending going forward amid the cost-of-living crisis, although demand from businesses should fare better even if it does see some customers delay upgrade plans for the likes of Windows, Office 365, or its server software products. The cloud-computing division should remain the most resilient part of the business this year.

Big Tech stocks have come under pressure since the start of 2022 as the growth outlook looks more challenging amid a myriad of headwinds. Notably, Microsoft shares have underperformed rivals and suffered steeper falls this year than the likes of Alphabet, Apple and Amazon – but analysts believe it can deliver the fastest earnings growth this year out of any member of Big Tech.

Microsoft shares have been in a downtrend since the start of 2022, having set a series of lower highs and lower lows, but the fact the stock has found a higher floor than the last leg at $280 will install some confidence.

The RSI is in bearish territory and trading volumes have been falling over the last 100 days. This suggests we could continue to see the stock drift between the top initial upside target of the 100-day sma at $307 and the $275 level of resistance seen on three occasions this year. A move outside of this channel is needed to signal where it could head next. Notably, the 200-day sma moved above the 50-day sma last month and is now edging closer to surpassing the 100-day sma, which would provide a fresh bearish signal for the stock.

If the stock can swiftly recapture all three moving averages it can target a move above $315, the ceiling hit in late March, before eyeing a move toward the all-time highs seen late last year. If the $280 and $275 downside targets fail to hold then we are likely to see shares sink to new 2022-lows below the existing one at $271. The next key level below here is $263. 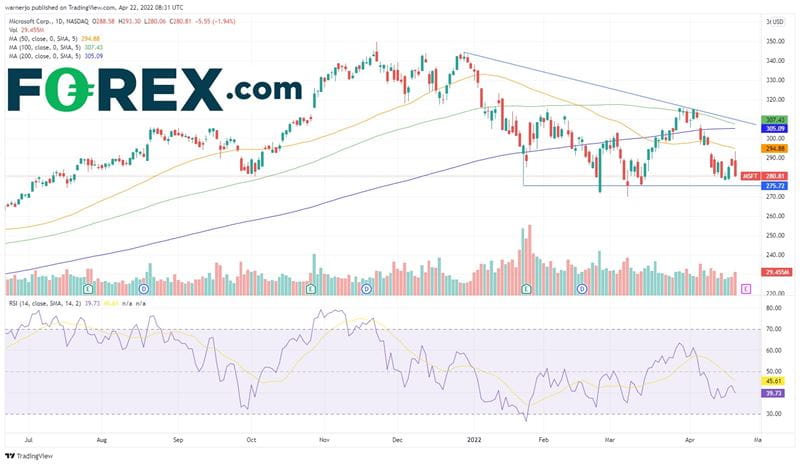