NIO is scheduled to release fourth quarter and full year results for 2021 after US markets close on Thursday March 24.

We already know that NIO delivered 25,034 vehicles in the final quarter of 2021, which is typically he busiest period of the year for deliveries. Although this was a new record for the business, it marked another mild rate of sequential growth as supply chain bottlenecks continue to limit expansion.

Still, that means NIO delivered 91,429 vehicles during 2021, more than double the 43,728 cars that it managed to shift in 2020. Below is a month-by-month and quarter-by-quarter breakdown of NIO’s deliveries throughout 2021, as well as the initial delivery numbers for 2022:

NIO has said it is targeting revenue of between RMB9,376.0 million to RMB10,105.6 million in the fourth quarter of 2021 and Wall Street believes it will deliver a 46% year-on-year rise to RMB9,719.0 million. Analysts forecast NIO’s adjusted loss per American Depository Share (ADS) will widen to RMB1.00 in the fourth quarter from RMB0.93 the year before.

With the industry still scrambling for components and chips while simultaneously struggling to keep costs contained amid the rising cost of materials, NIO’s margin will be closely-watched. The company’s vehicle margin peaked at 21.2% in the first quarter of 2021 but gradually tightened throughout the year to come in at 18% in the third quarter. Analysts believe this will remain broadly stable at 18.5% in the fourth.

Importantly, NIO said earlier this week that it has no plans to raise the price of its vehicles in the short term despite rising costs, but didn’t rule them out amid the inflationary environment, according to reports from Reuters. That follows on from a number of price hikes in recent weeks from its rivals in China, including Tesla, Xpeng and BYD.

NIO intends to launch three new models based on its next-gen technology this year and bring a second factory online in the second half of 2022, giving it new potential catalysts and expanded capacity to help it continue growing output. That is important considering order numbers have continued to hit new record highs and that NIO is also planning to start it big push overseas by entering some European markets this year to intensify competition with western carmakers. It also has its eye on the US market, where it will compete with Tesla on its home turf.

Supply chain headwinds and rising costs will influence NIO’s ability to grow this year, but the company has demonstrated it can navigate the tough environment. Deliveries in February 2022 of just 6,131 vehicles – the lowest monthly figure in four months – will make investors nervous going forward and leaving them wanting some reassurance in the outlook. However, that was mainly due to a week-long shutdown of its factory during the Spring Festival in early February, which it took advantage of by undertaking work to prepare the production lines for its next new model that will see the ET7 start to be delivered to customers later this month.

Deutsche Bank said this week that it believes NIO could go from producing 25,000 cars each quarter to 25,000 cars each month by the end of 2022 on the belief that bottlenecks will ease. The bank said NIO has a ‘leading service infrastructure that no domestic automaker has been able to match’. That is in reference to the fact NIO has decided to focus on infrastructure that allows people to switch the battery in their car when it runs out of juice, whereas most of the wider industry has concentrated on building out charging networks. This offers several advantages for NIO, such as faster charging times, but analysts also believe this makes NIO better adapted to absorbing the higher costs of batteries than its competitors.

NIO shares, which are now also on the Main Board of the Hong Kong Stock Exchange following a successful secondary listing this month, have proven volatile like many US-listed Chinese stocks over the past week after the Chinese government pledged to help businesses, draw a line under the regulatory crackdown that has plagued tech companies, and support companies like NIO that have overseas listings – removing some key uncertainties from the outlook. But they are likely to remain volatile while investors wait for the details of the government’s plan and evaluate whether it will be enough of a catalyst for NIO and other major players in China.

NIO shares have lost over two-thirds in value since peaking at all-time highs just over a year ago and hit their lowest level in 19 months last week. But the stock has rebounded in-line with the wider rally in Chinese stocks following the government’s intervention.

The fact average trading volumes during the last five sessions have increased markedly and come in more than double the 100-day average is strong evidence that the recent reversal can gain traction and the stock can head higher. However, the stock has failed to break above a $21.20 ceiling during the last two sessions and needs to make a sustained move above here before it can target the 50-day sma at $23. It can then target the February-high of $26 before it can eye the 100-day sma closer to $30.

There is a lot of recovery potential considering much of the pressure on shares over the past year has been a direct result of the issues that the government plans to directly address and it is worth noting that the 30 brokers covering the stock are very bullish and see over 140% potential upside with a target price of $50.80.

Still, the stock could continue to be volatile as investors digest the rapidly-evolving picture for Chinese listings and we could see shares slide back down toward $17 if they come under any pressure in the short-term, with any move back below here reopening the door to the 19-month low of $13. 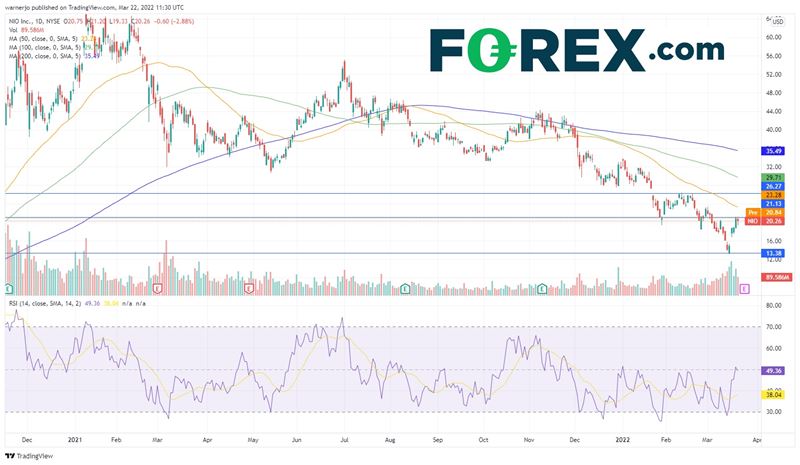