Spotify Q1 preview: Where next for Spotify stock?

When will Spotify release Q1 2022 earnings?

The horror show at Netflix last week has injected fresh fears into the streaming market. Concerns are growing that the no-contract subscription services offered by streaming giants could be the first to be cancelled as consumers tighten their belts this year and grapple with a surge in costs from everything from food to fuel.

Spotify may occupy a different space to Netflix by focusing on audio, but the fact the stock has shed almost one-fifth of its value since Netflix released its disappointing results shows the fear has spread to all segments of the markets, regardless of whether its video or music streaming.

Spotify saw Monthly Active Users (MAUs) rise 7% sequentially in the last quarter to end 2021 at 406 million. The company said in its outlook that it expected to add 12 million MAUs in the first three months of 2022 to end the first quarter with 418 million on its books. Wall Street believes Spotify could struggle to hit its target and thinks it only acquired 11 million subscribers in the period.

The mix of MAUs will be closely-watched. With consumers grappling with the cost-of-living crisis and tightening their purse-strings, we may see a rise in the number of users shifting toward the free ad-supported version of Spotify. This year will certainly be a test on how much value users place on their premium Spotify subscription, but the fact it offers an ad-supported version does provide what could prove to be a critical revenue stream should consumer budgets continue to come under strain over the coming months and possibly years – an advantage that other streaming stocks like Netflix don’t have, at least for now.

However, while the ad-supported version of the platform has a larger user base than the premium version and is growing at a faster rate, it is far less lucrative and only currently accounts for 15% of Spotify’s total revenue. With this in mind, Spotify has to keep growing premium subscribers if revenue is set to keep increasing.

Analysts believe Spotify can achieve its target to deliver EUR2.6 billion in revenue during the first quarter. Although that would be up over 21% from the year before, that will mark the slowest year-on-year growth delivered since the start of 2021.

Its gross margin is set to hit its lowest level in 18 months in the first quarter after Spotify said it was aiming to deliver 25%, down from the 26.5% booked in the previous quarter and from 25.5% the year before as it continues to ramp-up investment in podcasting and other areas like audiobooks to diversify its platform.

Spotify’s guidance points toward an operating loss of EUR67 million in the quarter to swing from the EUR14 million profit booked the year before. Analysts anticipate Spotify will report a slightly narrower loss of EUR60.8 million.

Spotify launched a EUR1 billion share buyback programme last August but that could be slowly implemented considering its expiry date runs until April 2026 and it only repurchased EUR89 million worth of shares during 2021.

Where next for SPOT stock?

The poor results from Netflix accelerated the downtrend in Spotify shares last week and the stock closed at a 13-month low of $110.21.

$110 should continue to act as a key psychological floor for the stock but we could see shares slide to the next downside target of $109. This is a far more significant level of resistance as a break below here could open the door to a fresh all-time low, which currently sits at $103 (from December 2018). Average trading volumes have risen almost 40% in the last five days compared to the 100-day average, supporting the view the stock could remain under pressure.

However, the RSI has recently slipped into oversold territory and the divergence seen over the last two months – with the share price hitting fresh lows while the RSI has remained higher – suggests the current downtrend is running out of steam. The 50-day moving average, which currently sits at $143.75, has proven to be a ceiling for the stock over the last five months and is the key upside target that needs to be recaptured to install confidence it can move higher. Beyond there, it can target the 100-day sma at $180, the February-high of $208 and then the 200-day sma $212.

Notably, the 31 brokers that cover the stock see even more upside potential for Spotify shares over the next 12 months with an average target price of $218. 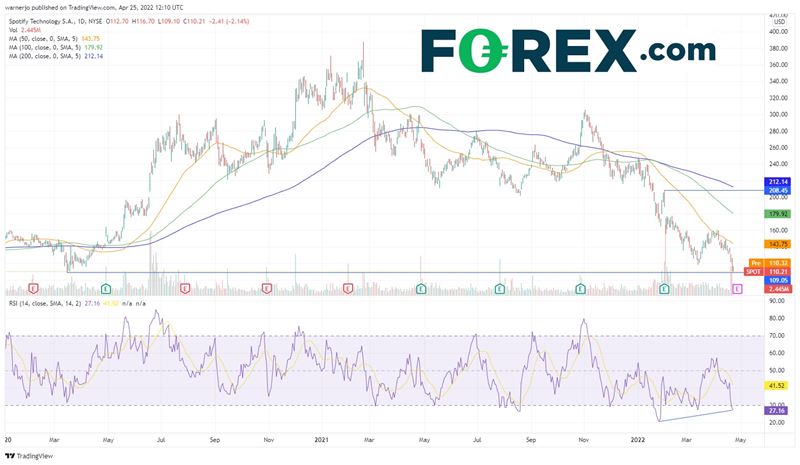 How to trade Spotify stock

You can trade the Spotify share price with Forex.com in just four steps: