Aston Martin will release preliminary full year results for 2021 on the morning of Wednesday February 23.

Aston Martin has already revealed that wholesale deliveries made to car dealerships rose 82% in the year to 6,182 units, ahead of the 6,000 target. That included 3,001 DBX units in the first full year of production of the model, which the company said has captured around 20% of the luxury SUV market.

Importantly, car dealerships are selling DBX and GT/Sport models at a faster rate than Aston Martin is supplying them – a key decision that provides scarcity to keep the luxury brand intact and keep demand for Aston Martin cars elevated while also providing stronger pricing power. Aston Martin has been focused on rebalancing this supply-demand dynamic after suffering due to an oversupply of vehicles to dealerships.

The rebalancing effort, twinned with a bigger marketing push centred around the latest James Bond film and the new Aston Martin Cognizant Formula One team, has led to a significant improvement in the strength of the company’s brand and led to higher prices and greater demand. The Formula One team has been particularly good at stirring-up interest in the brand, particularly in the US and China.

A Bloomberg consensus shows analysts are expecting annual revenue to jump over 80% year-on-year to $1.1 billion and for the company to swing to adjusted Ebitda – the company’s headline profit measure – of £150.2 million from the £70.1 million loss booked in 2020. Aston Martin is expected to remain in the red at the bottom-line for a fourth consecutive year, although the annual pretax loss is forecast to narrow to £238.2 million from £466.0 million.

Importantly, the carmaker was forced to trim £15 million off its annual adjusted Ebitda target for 2021 last month after delivering fewer Valkyrie models than expected. Deliveries started in the fourth quarter after several lengthy delays but only 10 of them were shipped before the end of 2021 compared to the 30 that markets were hoping for - although this is a timing issue and should push more deliveries and earnings into 2022 to help support the outlook for 2022.

Aston Martin has not provided insight into what to expect into 2022, but its goals are underpinned by an ambition to be shipping 10,000 wholesale units per year, deliver over £2 billion in annual revenues and £500 million of adjusted Ebitda by 2024/25.

In the meantime, investors will want some reassurance that Aston Martin has the resources it needs to sustain itself whilst it remains loss-making without the need to tap shareholders for funding again, having conducted several capital raises since going public in 2018 and contributing to the steep fall in its share price since its IPO.

The company spent more money than it generated during the first nine months of 2021 and that trend is expected to continue in 2022 and beyond. For example, analysts currently forecast Aston Martin can generate around £269 million in operating cashflow in 2022 but will spend £319 million in capital expenditure alone. Plus, spending is expected to rise as Aston Martin refreshes its range of sports cars and progresses toward its ambition to offering hybrid or electric versions of all its models by 2025/26 and over 90% of its vehicles electrified by 2030. With this in mind, Aston Martin had £495 million of cash in the bank and has little room to shoulder more debt on its balance sheet. Net debt stood at £808.6 million at the end of September, higher than where it sat a year ago but still below pre-pandemic levels.

Aston Martin shares have been trending lower since August and are currently sat at 1,099p – marking their lowest level in 15 months. The bearish RSI and the fact the 50-day moving average remains below the 100-day sma (which in turn is below the 200-day sma) suggests there is room for shares to fall lower. This price, which also emerged as a key level of resistance in early November 2020, needs to hold to avoid opening the door to below 1,000p, but it has already been tested by sellers today.

The 50-day sma, which currently sits at 1,253p, has proven to be a ceiling for shares for almost five months and is the first upside target the stock needs to break through to signal a material move higher toward the 2022 closing-high of 1,401p, in-line with the 100-day sma. 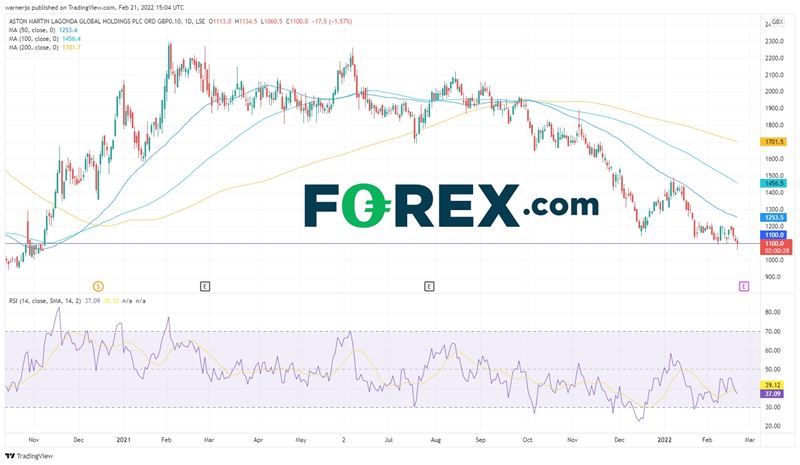 You can trade Aston Martin shares with Forex.com in just four steps: