Barclays Q4 preview: Where next for the Barclays share price?

When will Barclays release Q4 earnings?

Barclays will report its full year earnings for 2021 on the morning of Wednesday February 23.

We are right in the middle of the earnings season for the Big Four banks listed in London. NatWest kicked things off last week by revealing it generated bumper profits of £4 billion in 2021 after suffering a £351 million loss the year before, allowing it to grow dividends, launch a new buyback and set a buoyant tone for its peers that report this week. HSBC reports earnings early on Tuesday morning and Lloyds will round things off on Thursday morning.

Barclays posted its largest-ever year-to-date pretax profit when it released results covering the first nine months of the year back in September. The strong recovery in earnings has been the result of a strong performance from its investment banking arm, a rebound in its consumer banking division as Covid-19 fears ease, and the boost provided by unwinding the large sums sets aside during the initial stages of the pandemic as the economic outlook continues to improve.

Those trends will have continued in the final quarter of 2021. Below is an outline of what analysts expect Barclays to report in the fourth quarter and for the full year:

The bank’s investment banking arm has been a vital lifeline for Barclays and some other banks as a boom in global dealmaking allowed them to reap profits and counter the hit taken by other parts of the business as the pandemic took its toll on the global economy. However, the boost provided by the Corporate and Investment Bank is waning considering the unit is expected to deliver just $680 million of profits in the final quarter of 2021 compared to over $1.5 billion in each of the first three quarters of the year. The unit could also struggle in 2022 as it starts to come up against tough comparatives.

But this is coinciding with the recovery being seen from its retail and business banking operations in the UK and its international arm that offers consumer and private banking and homes its vast payments network as the world recovers from the pandemic. The outlook here is also brightening as markets expect interest rates to continue rising, which boosts the amounts banks can make on the likes of loans and mortgages.

Below is a breakdown of pretax profit expectations by division to demonstrate how each one is set to contribute toward the strong rise in profits in 2021.

The threat rising costs pose to profitability is a key theme across the banking industry amid rising inflation. The bank’s cost to income ratio, which measures how fast costs are growing versus topline income, is set to rise to 66.8% in 2021 from 64.0% the year before. Barclays said in its last update that it intended to introduce new ‘structural cost actions’ in the fourth quarter, which could help install confidence that it has costs under control. The bank’s net interest margin is expected to stay broadly flat sequentially at 2.9% in the final quarter, but this will still be down from the 3.26% reported the year before. The margin should dip to around 2.91% over the full year in 2021 from 2.94% in 2020.

Barclays delivered return on tangible equity (RoTE) of 14.9% in the first nine months of 2021, but the bank has held a conservative view for the full year with guidance for RoTE of over 10%. Analysts believe the bank will beat this with an annual RoTE of 12.5%.

Turning to the balance sheet, Barclays is expected to end 2021 with a CET 1 ratio – which measures the financial strength of the bank – of 15.04%, above its target range of 13% to 14%. Barclays continues to deliver a progressive dividend policy and return additional cash through buybacks, which will be key to deciding how markets react to the results this week.

This will also be the first set of results since CS Venkatakrishnan took over as the CEO of Barclays at the start of November, replacing Jes Staley. Investors will be keen to see how he stamps his authority of the business, having already made a shake-up to management, and how he views the outlook for 2022 and beyond. One of his biggest jobs will be to provide some sort of catalyst to increase the value of Barclays, which has severely underperformed its rivals in 2022 since falling from a near four-year high in January while rivals are continuing to climb to new post-pandemic highs.

Barclays shares climbed to their highest level in almost four years in January at 219.60p, but the stock has struggled since after attracting sellers back into the market eager to lock-in profits.

That pushed shares down to the 2022 closing-low of 190p last month, which was unsuccessfully tested last week to make this the initial level of support for the stock. The broader uptrend that started back in July remains intact and should provide the ultimate floor for the stock at around 187p, roughly in-line with the 200-day sma, if the initial floor doesn’t hold.

The share price has tested the 100-day sma at 195p today and this is the first level it needs to recapture to signal a move higher, first to the 50-day sma at 197p and then the 209p level of resistance hit last month. 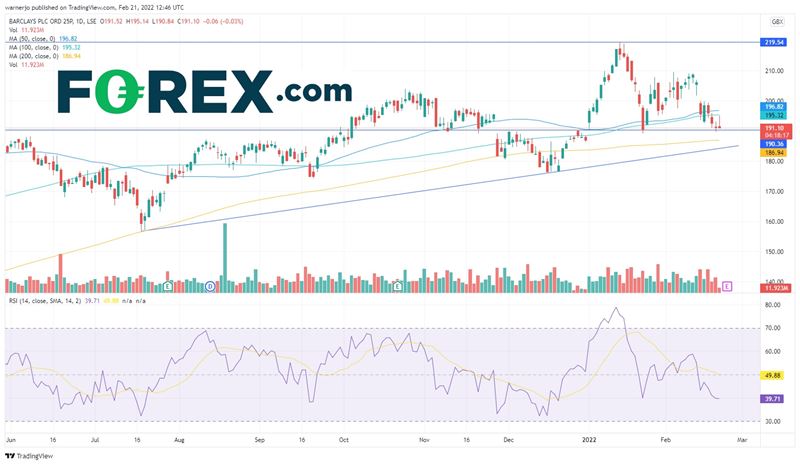 You can trade Barclays shares with Forex.com in just four steps: