Fresnillo 2021 preview: Where next for the Fresnillo share price?

When will Fresnillo release 2021 earnings?

Fresnillo will release preliminary full year results for 2021 on the morning of Tuesday March 8.

Fresnillo is the world’s largest primary silver miner and the biggest gold miner in Mexico. It produces both commodities from seven mines in the country. The current story is that Fresnillo is benefiting from the significant rise in gold and silver prices but is also dealing with several headwinds that could prevent it from growing output and fully capitalising on the current environment.

Fresnillo has already released its annual production report for 2021 and revealed that silver production was flat from 2020 while gold production continued to decline.

However, the lower overall output will be more than offset by significantly higher prices for both commodities, which will see Fresnillo post strong growth in 2021 with analysts forecasting revenue will jump 10.7% to $2.69 billion and that improved profitability will help gross profit rise at a faster rate of over 20% to breach the $1.0 billion mark. Below is an outline of what analysts expect for the key financial figures in 2021:

Fresnillo has already set its targets for 2022 and warned that gold output will fall dramatically with a target of between 600,000 to 650,000 ounces of gold. This will be caused by the Noche Buena mine, which is coming to the end of its mine life after over a decade of production.

It has also outlined plans to produce between 50.5 million to 56.5 million ounces of silver. This was downgraded in January and the wide-range is the result of the uncertainty at the Saucito operation due to staff shortages after a reform of Mexican labour laws has made it harder for the company to subcontract workers, forcing it to find and hire people to work internally, while Covid-19 is also causing more employees to take time off. Saucito is also suffering from lower grades because earthquakes have made it more unstable, which is requiring the company to undertake more construction work to get it back to normal.

In January, chief executive Octavio Alvidrez warned the company ‘must continue to navigate the challenges presented by both Covid-19, which regrettably is again accelerating in Mexico which will impact labour availability in particular’. The Omicron variant forced more workers to isolate and Fresnillo warned this was likely to continue throughout the first three months of 2022.

These headwinds place further pressure on Fresnillo to get its newer development projects up and running in order to counter declining output elsewhere in its portfolio. However, its two main development projects, the new Pyrites processing plant at the Fresnillo mine and its Juanicipio project, have both suffered delays. It has taken longer to hook up the two new plants, which processes the ore it mines, to the national grid, which means production can not reach optimal levels in the meantime, weighing on the guidance for 2022. Construction of the Juanicipio plant was completed on schedule in the fourth quarter of 2021, but it has not been able to complete the power connection as planned as it scrambles to meet new legal requirements. This has caused a six-month delay and the connection will now be made before the end of the second quarter of 2022.

Fresnillo shares gapped lower in late January after it issued its initial production guidance for 2022 and warned output was set to decline this year, sinking to a 22-month low of 610p in the middle of February before buyers started returning to the market.

Shares have been trending higher since and have risen over 14% in the past three weeks. That trend, and the fact the RSI has recently re-entered bullish territory, is reinforced by the fact trading volumes over the past 20 days have risen compared to the average over the last 100 days.

The stock has tried but failed to close above 736p over the past week and this is the first immediate level it needs to target to keep the uptrend alive before it can recapture the 50-day sma at 747p. Beyond there, it can look to close the gap at 795p and start to target the longer-term moving averages.

If the stock breaks out of the current uptrend and starts to come under pressure again then we may see it slide back toward the 667p level of support seen last month. Notably, the short-term moving average continues to trend well below the longer-term.

The 15 brokers covering Fresnillo remain bullish on the stock with an average Buy rating and a target price of 883.21p implying there is over 23% potential upside from the current share price.

Mining stocks are highly influenced by the price of the commodities they produce. A rise in iron ore prices usually feeds through to stocks that mine the commodity and this trend is typically true for gold and silver miners too.

However, Fresnillo has significantly underperformed versus both gold and silver prices over the past 14 months, having fallen almost 38% despite both commodities climbing higher. This is partly explained by the fact output is declining and that Fresnillo faces additional challenges than the wider gold and silver market, serving as an important reminder that mining stocks perform differently to the commodities they mine. 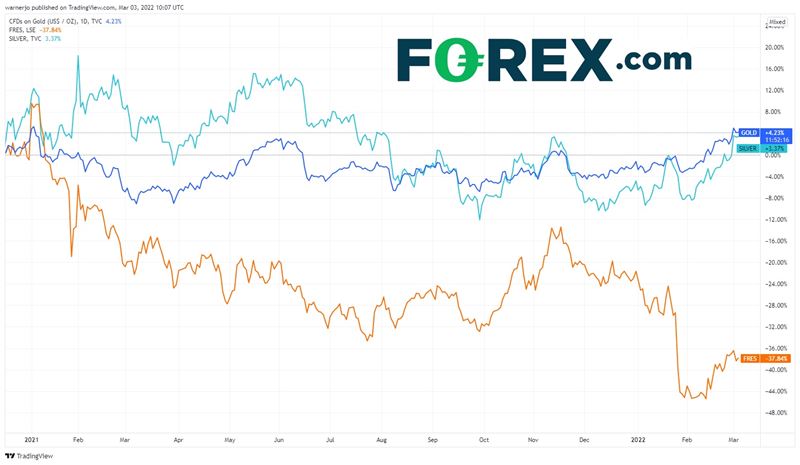 Still, Fresnillo shares have risen at a faster rate since the Russia-Ukraine conflict brought both commodities into play, with gold attracting investors seeking a safe-haven in uncertain times. We may see the correlation in prices tighten so long as investors rely on safer bets amid escalating geopolitical tensions. 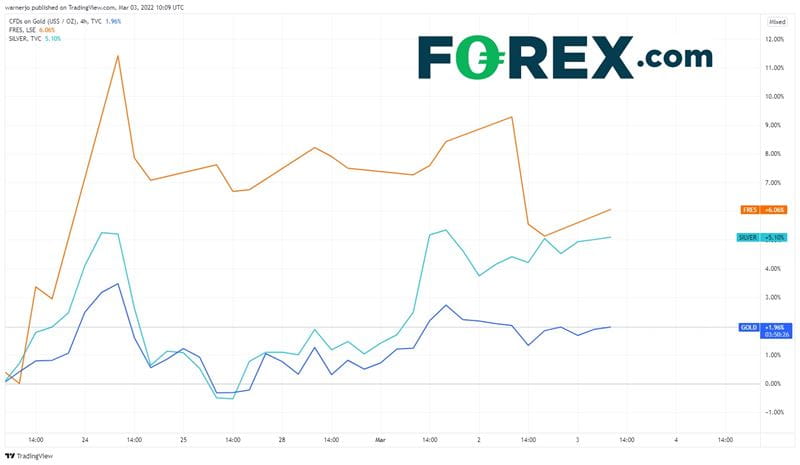 You can trade Fresnillo shares with Forex.com in just four steps: