HSBC Q1 preview: Where next for the HSBC share price?

When will HSBC release Q1 2022 earnings?

HSBC, which is listed in both London and Hong Kong, will publish first quarter earnings at 0500 BST on Tuesday April 26.

HSBC will be the first major London-listed bank to report earnings, with Lloyds scheduled to follow on Wednesday April 27, Barclays on Thursday April 28 and NatWest rounding things off on Friday April 29.

HSBC said earlier this year that it was entering 2022 with ‘good business momentum’ in most areas and that it expected mid-single-digit lending growth over the year as a whole, but warned its Wealth division in Asia will deliver a weak performance in the first quarter. The economic outlook has changed drastically since then and investors will be looking for reassurance that it still feels confident about 2022.

Analysts are expecting HSBC to report a 4% year-on-year decline in adjusted revenue to $12.7 billion in the first quarter of 2022, while its reported profit after tax – its headline earnings measure - is expected to plunge to $2.9 billion from the $4.6 billion reported the year before, when the bank delivered bumper earnings growth thanks to the release of provisions that had been set aside during the pandemic.

Notably, HSBC, which had boosted earnings by releasing reserves for three consecutive quarters, said it built reserves by putting aside $500 million in the fourth quarter of 2021 to reflect the increased risk spawning from China’s commercial real estate sector, and analysts believe it will bolster reserves by another $860 million in the first quarter of 2022 as more risk hangs over the global economic outlook. The way the bank tinkers with its reserves is one way to gauge HSBC’s confidence about the future as it funnels cash away when things are uncertain and unravels its troves of cash when things improve. The last round of reserves were driven by uncertainty spawning from the pandemic, but the headwinds this year are very different and dominated by how the likes of inflation, supply chain headwinds, the Russia-Ukraine conflict and fresh Covid-19 outbreaks in China are weighing on the global economy’s ability to bounce back from a chaotic couple of years.

Meanwhile, attention will be paid to how HSBC is handling the rise in costs that is impacting the wider banking industry. Operating expenses are forecast to come in at $8.9 billion in the first quarter, up over 4% from the year before. Analysts at Bloomberg Intelligence notes that this will be just below the ‘critical level of $9 billion’, suggesting any figure above here could severely sour the mood on the bank’s ability to keep a lid on costs.

HSBC is trying to counter rising costs with a plan to deliver $2 billion worth of annual cost-savings in 2022, but this will cost a one-off $3.4 billion to achieve. It has said it expects this to ease in 2023, when it thinks expenses will rise 0% to 2%. Notably, HSBC’s net interest margin – a key measure of profitability – is forecast to rise to 1.24% in the first quarter, which will be its best performance in seven quarters. One major catalyst that should help improve profitability of banks this year is higher interest rates as central banks try to get a grip on rampant inflation. In the meantime, markets will be concentrating on what loan growth could look like this year as growth expectations continue to fall amid the inflationary pressure hitting the global economy, and how quickly revenue can grow compared to rising costs.

HSBC hiked its dividend to $0.25 in 2021 from the $0.15 paid out in 2020 as the bumper year of earnings allowed it to return more cash to shareholders. HSBC is also complimenting this with buybacks after announcing in the last quarter that it will launch a fresh $1 billion programme once the existing $2 billion buyback is completed and shareholder returns will be key in deciding how markets react to the upcoming results and prove to be another gauge to evaluate how HSBC feels about its prospects.

Where next for HSBA stock?

HSBC shares have been a standout performer within the European banking sector in 2022. The stock has risen over 13% since the start of the year while Barclays has sank over 23% and its UK-focused rivals Lloyds and NatWest have seen their shares slide over 6% and 3%, respectively. Meanwhile, the STOXX Europe 600 index has fallen over 4% and the MSCI Europe Banks index has suffered a 5% fall.

HSBC shares have been rising in an uptrend for over six weeks, although this has run out of steam since the start of April, and we have seen a new potential ceiling emerge after shares tested and failed to break past the 538p threshold this week. On the flipside, the 50-day moving average at 519p should be treated as the initial floor after the stock recently recaptured this level.

If HSBC shares can break above the initial ceiling, then we could see a swift move to the next upside target of 548p. Beyond there, it can start to target a fresh post-pandemic high above the 567p-high hit in February. The RSI remains in bullish territory and is supported by a slight uptick in average trading volumes over the past 10 days and the fact the short-term moving averages continue to diverge above the longer 200-day sma. Notably, the 22 brokers that cover the stock believe HSBC shares can rise over 10% over the next 12 months and hit as high as 587p.

The stock has dipped since hitting the initial ceiling and we could see shares fall back to 514p should the initial floor fail to hold. A break below here would be more significant as it reopens the door to below 503p and the 100-day sma that sits just below 500p. If HSBC’s outperformance this year unravels then we could see it slide to the 2022-low of 466p and then toward the 200-day sma. 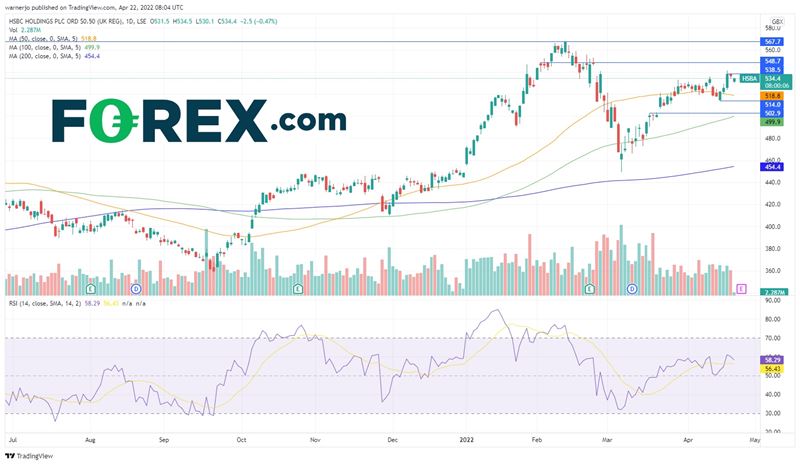