Royal Mail FY preview: Where next for the Royal Mail share price?

Royal Mail is scheduled to publish full year results covering the 12 months to the end of March on the morning of Thursday May 19.

Royal Mail shares have lost around one-third in value since the start of 2022. The company proved to be a winner as shopping shifted online and ramped-up demand for parcels to be delivered during the pandemic, but appetite has waned over fears that this demand will unwind in 2022 at a time when costs are rising and the economic outlook is becoming more challenging.

The company, which is formed of the Royal Mail brand and its GLS unit that operates across Europe and is expanding across North America, has seen a sustained shift in demand for parcels since the start of the pandemic. The number of parcels sent through both Royal Mail’s domestic network and GLS were still over 33% above pre-pandemic levels in the last three months of 2021.

The company believes this is a sustained shift in parcel demand but has warned that volumes could continue to prove volatile month-to-month in the near term.

One problem that was severely impacting Royal Mail was the impact the Omicron variant was having on staff absences in early 2022, with the number of staff having to take time off work doubling compared to normal levels. This was reducing the quality of its service, delaying delivery times and pushing up costs – but investors are hoping this headwind has eased considering Covid-19 has faded away and restrictions have been scrapped.

Notably, the company said it plans to ‘further simplify and streamline our operational structures’ at Royal Mail going forward, including scrapping 700 managers to deliver an annual cost benefit of around £40 million, around three-quarters of which should be booked in the 2023 financial year. However, that will cost around £70 million to achieve.

That comes as Royal Mail negotiates terms with labour unions, which will be of even greater importance to investors. The fear here is that any savings made by reducing the headcount could be offset by any rise in wages for the remaining staff, with unions pushing hard considering their members are grappling with the cost-of-living crisis. This is Money reported over the weekend that talks were at ‘crucial phase’ and that they were still disagreeing over the terms of the pay rise on the table. This could be critical considering the union has threatened to call a strike ballot if an agreement can’t be reached which, if approved by members, would be the first strike in almost a decade. This will be a key factor in deciding how well Royal Mail can improve the efficiency of its service and save money, both of which will directly translate to the bottom-line.

The company has said the Royal Mail side of the business will report an adjusted operating profit of around £500 million, or £430 million once £70 million worth of restructuring costs are taken into account. That will be up from just £344 million in the 2021 financial year and the £117 million booked in 2020. The improvement will be down to costs related to Covid-19 and its restructuring falling away compared to last year.

Analysts expect the total adjusted operating profit to rise 9.3% to £767.1 million from £702.0 million the year before. This takes the £430.0 million figure from Royal Mail into account as well as a £338 million contribution from GLS, which reported a profit of £358.0 million last year.

Analysts forecast the company will see annual revenue grow just 1.5% in the year to £12.83 billion as it faces tough comparatives from the year before, when the topline soared over 16%. For context, annual revenue grew around 4% to 5% over the three years before the pandemic erupted. Reported pretax profit at the bottom-line is forecast to dip 2.9% year-on-year to £704.7 million.

The outlook will be under the spotlight. Royal Mail is operating in a sector with strong fundamental and structural drivers as the surge in demand for logistics and delivery networks shows no signs of abating anytime soon. However, while the long-term future looks bright, the outlook over the short-to-medium term is dominated by concerns about how rampant inflation, a possible recession and a slowdown in consumer spending will impact parcel volumes and price at a time when Royal Mail is still trying to restructure its business and dealing with rising costs.

The stock has rebounded since hitting a 15-month low of 316.0p earlier this month but shares remain pinned down by the downtrend that has taken hold over the past 11 weeks. The first floor is the 325.0p level of resistance seen throughout early April before the 15-month low comes into play, which must hold to avoid bringing in fresh lows of below 310p.

Notably, shares have today recaptured the 50-day moving average for the first time since late January, with the indicator having acted as a firm ceiling over the past month. This suggests shares could break out of the current downtrend and recover back toward the March-high of 379.0p. From there, the recovery could be swifter as it brings the 100-day sma at 400p back into play and then the 200-day sma at 434.0p. It can then look to break back above 450p.

The 15 brokers that cover Royal Mail believe the selloff in 2022 has been overdone and have an average target price of 525.50p, implying shares can return to levels last seen back in January over the next 12 months. 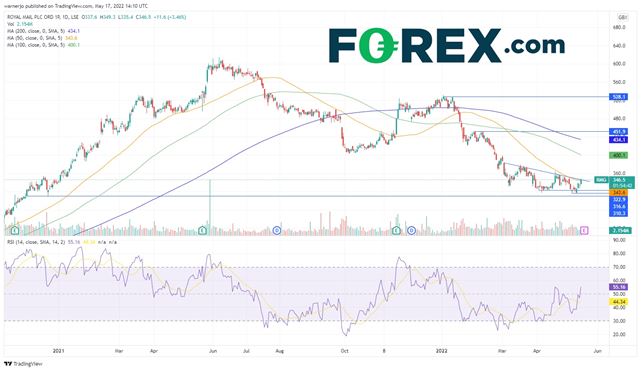 How to trade Royal Mail shares

You can trade Royal Mail shares with Forex.com in just four steps:

View more
Looking to stay away from FED, BOE, and ECB this week? How about AUD/CAD?
US indices hit by profit-taking
Currency Pair of the Week: EUR/USD
W3BCLOUD SPAC: Everything you need to know about W3BCLOUD stock
The top 10 most traded currencies
Fed meeting preview: The magic show of interest rates, inflation, and growth