Tesco FY preview: Where next for the Tesco share price?

Tesco will publish annual results covering the 12 months to late February 2022 on the morning of Wednesday April 13.

Tesco is expected to see sales and profits rebound when it releases annual results as it recovers from the tough times seen in 2020/21. Although supermarkets performed better than most retailers after being allowed to remain open during the height of the pandemic, it did introduce a swathe of new Covid-19 costs and significantly hurt profitability.

Those Covid-19 costs are now falling away as the pandemic eases and sales have recovered as the economy starts to normalise. But having navigated the Covid-19 crisis successfully, Tesco and the wider industry is now facing a slew of new challenges ranging from mounting inflation to supply chain headwinds.

A company-compiled consensus shows analysts are expecting Tesco to report £61.2 billion in revenue, which would be up from the £57.9 billion booked the year before. Adjusted operating profit is forecast to rise over 54% to £2.8 billion from £1.8 billion last year, while adjusted EPS is expected to jump 80% to 21.78p from 11.94p.

The main weapon of choice of supermarkets for decades in an intensely competitive industry has been pricing, with the momentum gained by German discounters Aldi and Lidl forcing other players to strive to offer the best value. That is now likely to prove more important than ever as rampant inflation starts to feed through to food prices, which will undoubtedly continue to climb this year as the cost of everything from wheat to dairy climbs higher. Tesco announced last month that it was hiking the price it pays fresh milk suppliers by almost 20% as they grapple with rising costs for everything from fertiliser to feed.

The ability to keep prices down for consumers will be key in deciding which supermarkets emerge successful, in addition to those embracing the shift to online shopping. This is expected to lead to a decline in volumes, although revenue should hold up as this will be offset by higher prices. It is also causing more cost-conscious shoppers to turn to own-label products, which is another area that Tesco has been focused on building-out in recent years.

In addition to rising food prices, Tesco is also grappling with other rising costs. For example, the company announced just yesterday that it is raising its pay to £10.10 per hour from the current rate of £9.50 this July, while those driving delivery vans or working on its click-and-collect service will see their pay rise to £11.00 from £10.10.

Earlier this week, Morrisons – which was taken private last year – warned that sales and profits are likely to suffer this year as the crisis in Ukraine exacerbates existing supply chain and inflationary pressure and forces consumers to reduce spending. ‘Unless these conditions improve, the impact of these developments could have a material adverse effect on our sales and Ebitda for the year,’ the supermarket warned. This is significant considering the key advantage boasted by Morrisons is the fact it produces a lot more of its own products compared to its rivals, and boasts a wide network of processing plants, abattoirs and other production facilities.

With all of this in mind, Tesco has performed well compared to its rivals. It remains by far the largest supermarket in the UK and has been the only member of the so-called Big Four that has managed to gain market share over the past 12 months, while Sainsbury’s, Asda and Morrisons have all ceded ground to discount chains and online grocer Ocado.

Tesco’s key advantage over its rivals is its scale and buying power. Its wholesale arm Booker Group, which sells an array of food and drink to restaurants, takeaways and other hospitality venues as well as the Premier, Londis and Budgens convenience store brands, also provides another key differentiator. Booker’s sales are already running well-ahead of pre-pandemic levels as hospitality sites have reopened and performed better than expected even when the Omicron variant threatened to cause further disruption. This could be key in helping Tesco offset any tightening of demand from the core supermarket business as people tighten their purse strings this year.

Tesco has also scaled back its ambitions in recent years, having withdrawn from some international markets to leave it less spending requirements and improved cashflow, broadening the scope for more cash to be returned through dividends and buybacks while also investing in the business. Tesco kept its interim dividend flat but the final payout should grow considering the lift in profits and the progressive policy in place. Analysts believe the total dividend for the full year will be closer to 11.0p compared to the 9.15p payout made the year before. Tesco also launched a new £500 million buyback programme last October.

Where next for TSCO shares?

Tesco shares soared over 35% in the seven months to the end of January 2022 before succumbing to the wider selloff in markets.

The stock has now fallen back over 10% in the last 10 weeks, but appears to have found a floor around the 270p mark, roughly in-line with the 200-day sma at 269p, as this has proven to be an attractive enough level to bring buyers back into the market in recent days. If it breaks below the 200-day sma then the door will be open to the 2022-low of 264p.

There are several indicators suggesting shares could come under further pressure going forward. The RSI is trending lower into bearish territory and is reinforced by the fact that average volumes have seen a notable uptick over the past 5 days compared to the 10-day and 20-day moving averages to suggest the recent downtrend is gaining momentum. Plus, we have seen the 50-day sma sink below the 100-day sma for the first time in nine months.

On the upside, shares have failed to deliver a sustained move back above 274p during the past three sessions and this is the first hurdle to clear before it can start to target the shorter-term moving averages around the 284p to 285p mark. Notably, the 22 brokers that cover Tesco believe the selloff seen this year has been overdone and think the stock can rise by as much as 18% over the next year with an average target price of 320.3p, well above the 304p peak seen at the end of January. 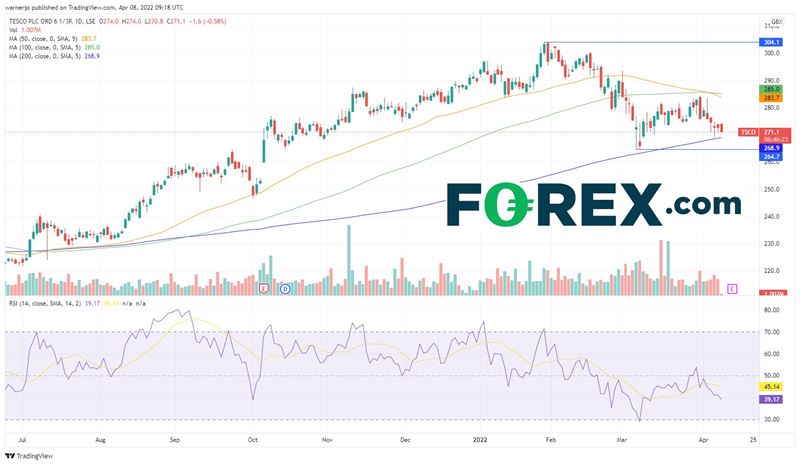