Where next for Twitter stock amid Musk’s $44 billion takeover?

Twitter has struck a definitive agreement to be acquired by Elon Musk for $54.20 per share, valuing the social media platform at $44 billion. If completed, this will see Musk, the founder of Tesla and SpaceX, take Twitter off the stock market and take it private.

The two sides have reached a deal after a frosty start to their relations after the Twitter board adopted a poison pill approach to prevent anyone else acquiring more than a 15% stake in the business after Musk rejected its offer to join the board so long as he committed to capping his stake in the company.

The offer of $54.20 per share represents a 38% premium to the $39 Twitter shares were trading at before Elon Musk first revealed he had bought a 9.2% stake in Twitter on the first day of April.

The price tag is considerably below the $77 all-time high Twitter shares hit in February 2021, but it is important to flag that Twitter shares have rarely traded above Musk’s offer price since it went public in 2013, and it has only managed to briefly remain above that level when it has.

Twitter generated just over $5 billion in revenue and reported a $493 million operating loss in 2021 and that, twinned with a tougher outlook for platforms largely reliant on online advertising for their income, suggests it would be some time before Twitter shares could recover to the valuation that Musk has placed on the company in absence of the offer.

‘The Twitter board conducted a thoughtful and comprehensive process to assess Elon's proposal with a deliberate focus on value, certainty, and financing. The proposed transaction will deliver a substantial cash premium, and we believe it is the best path forward for Twitter's stockholders,’ said Bret Taylor, Twitter’s independent chairman.

Musk has already revealed he has secured $46.5 billion in funding for his takeover of Twitter. That is made up of $25.5 billion in debt financing and $21 billion in equity that will have to come from Musk unless he can convince some partners to help him finance the deal. Just under half of the debt financing is coming from a margin loan against his shares held in Tesla.

With the funding already secured, Twitter said there are ‘no financing conditions to the closing of the transaction’.

The Twitter board has unanimously approved the takeover and the only major hurdle for the deal that is apparent so far is that shareholders must approve the deal. Assuming they do, the deal is set to close sometime in 2022.

However, it is still unclear whether any other potential barriers could emerge. The biggest question now is where Musk gets the $21 billion equity part of the financing. There have also been suggestions that regulators could step in, with several high-profile politicians weighing-in on the debate, on Twitter of course.

Notably, Twitter shares are trading higher in early premarket trade today but remain below the offer price to signal that markets still have some doubts that the deal will be done.

Musk wants to take Twitter private as it believes the company needs to undergo significant change that can’t be accomplished while it remains publicly-traded and focused on growing value. Musk has already said he doesn’t care about the economics of the deal ‘at all’ and wants to turn Twitter into a more trusted platform that is more inclusive.

‘Free speech is the bedrock of a functioning democracy, and Twitter is the digital town square where matters vital to the future of humanity are debated,’ Musk said in a statement. ‘I also want to make Twitter better than ever by enhancing the product with new features, making the algorithms open source to increase trust, defeating the spam bots, and authenticating all humans. Twitter has tremendous potential – I look forward to working with the company and the community of users to unlock it.’

Jack Dorsey, the founder of Twitter who left the business last year, welcomed the takeover and said Twitter had suffered by being underpinned by advertising and at the behest of shareholders, stating ‘taking it back from Wall Street is the correct first step’.

There are a lot of unanswered questions for Twitter. There is little insight into who Musk will appoint to run the platform and concerns over how staff could react to the company being owned by someone who has been highly critical of the platform. With promises to reduce moderation and open the doors to free speech, there will be some employees concerned if they will still have a job after the takeover.

There is also interest into how much time Musk himself will dedicate to his ambitions at Twitter, and how this could distract him from his growing empire that already encompasses gigantic businesses including Tesla, SpaceX, the Boring Co and Neuralink.

How will users react to Musk’s takeover and the changes he implements? Some have suggested a subscription model could be introduced, which could dramatically change demand for the platform. Musk has tweeted that he hopes ‘that even my worst critics remain on Twitter, because that is what free speech means’. And how will regulators, which are forever telling social media platforms to get a better grip on content, respond to Musk’s plan, especially as he has already butted heads with them on several occasions in recent years?

We may have a deal, but there remains a lot of uncertainty for Twitter as the takeover progresses.

It appears the Twitter board wanted to come to a decision about Musk’s offer before it releases first quarter results after the markets close on Thursday April 28, having met with the Tesla founder on Sunday to get the deal done. There is no doubt that the takeover will be the primary focus when the earnings are released, but it is notable that the board said it wouldn’t be holding its usual conference call as a result of the offer. Still, the board enters this earnings season with greater clarity over what is going on compared to if they were still negotiating with Musk behind the scenes.

Wall Street believes Twitter will have ended the first quarter with 226 million users on the platform compared to the 217 million it had at the end of 2021. Notably, that would mark the fastest sequential growth for over 18 months. Revenue is forecast to rise 19% year-on-year to $1.23 billion and adjusted EPS is expected to fall to $0.03 from $0.16 the year before.

Where next for TWTR stock?

Twitter shares were halted late yesterday as markets awaited the big news announcement but are set to come back into play today. Twitter shares are trading 0.6% higher before the bell at $52, signalling there are still some concerns over whether the deal will be completed. Markets will also be contemplating the limited upside potential from current levels, with better opportunities to pursue elsewhere in the market.

With $54.20 now essentially locked-in, this will act as the ceiling for the stock so long as the takeover is still on the table – unless a new surprise bidder emerges with a higher offer, which could open the door to further upside potential and set a new ceiling for the stock.

For now, amid the current state of play, downside risks outweigh the upside potential. Twitter shares traded closer to $39 before it was revealed that Musk had invested in the business and shares could swiftly unravel back towards this level – or possibly even lower toward the 20-month low of $31 hit in February – if the deal faces any serious challenges or collapses for whatever reason. 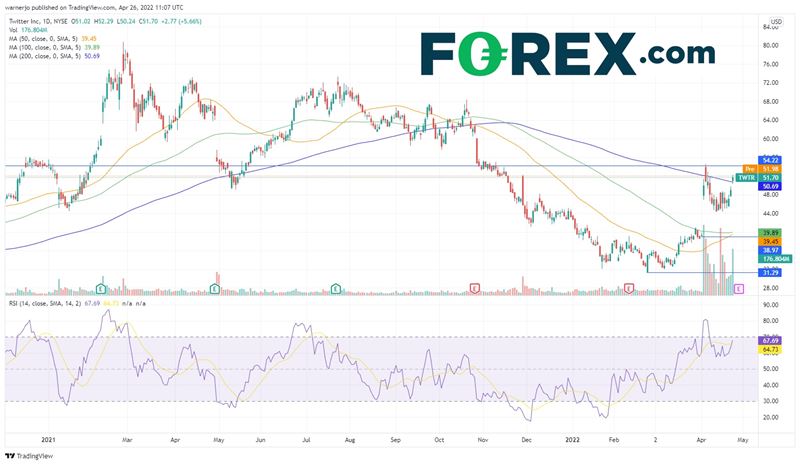 You can trade Twitter shares with Forex.com in just four steps:

What about Donald Trump and DWAC?

It is worth noting the headache that Musk’s takeover could be causing former US president Donald Trump, who was banned for life from Twitter but is now widely expected to be reinstated if Musk takes over. He has launched his own social media platform named TRUTH Social and promised to offer an open tent that embraces free speech – all of which could be undermined if Musk introduces the radical change at Twitter that he has promised. Trump has reportedly said he would not re-join Twitter even if he was allowed back, but Twitter was key to his communications during his presidency and reports suggest TRUTH Social has had faced significant challenges since launching earlier this year.

Trump’s venture TMTG that owns TRUTH Social is currently in the process of merging with a listed Special Purpose Acquisition Vehicle named Digital World Acquisition Corp, which has plunged over 43% in value since Musk first unveiled his stake in Twitter and prompted theories that he could seek change at the company.