Wetherspoons stock is rebounding from a 10-year low as the hospitality industry fights against rising inflation, energy prices and alcohol taxes. Read on to learn more about Wetherspoons ahead of its FY22 earnings.

When will Wetherspoons release FY earnings?

Wetherspoons will release full year earnings on the morning of Friday October 7.

Wetherspoons was originally expected to have a ‘break-even’ outcome for profits in the current financial year, which is what created expectations of growing revenue and narrowing losses.

But since then, Wetherspoons announced in its last pre-close trading update that like-for-like sales for the first 11 weeks of Q4 were 0.4% lower than pre-pandemic levels and has said it will report a £30 million loss this year.

While forecasts remain positive, with markets still believing they’ll beat this with a slightly smaller loss of £19.2 million, Wetherspoons shares have fallen over 57% since the start of the year and are currently rebounding from their lowest level in over a decade.

All this has created an interesting story for Wetherspoons as it heads toward its earnings: expectations of rising revenue alongside growing losses.

While a boom in pub sales was expected when lockdowns and restrictions ended, the recovery for the industry has been slower and more laborious than was anticipated, according to the company.

"Many people now work from home, rather than from offices, which has had a significant impact on transport and hospitality businesses, among other examples.”

Wetherspoon’s real estate is very high street focused, which means they’ve been struggling to draw in consumers since the pandemic. The pub chain has now started the process of selling 32 pubs across the UK. The group called it a ‘commercial decision’ amid the rising cost of staff wages and the large amount of repairs needed due to inaction over lockdown. Repair costs alone are expected to cost the company around £99 million in FY22 compared to £76.9 million before the pandemic.

Another point worth considering is that Wetherspoon’s business model is volume based – bringing in a greater number of lower-income customers who want to pay less for its discounted offerings.

As inflation rises, this could mean more people skew toward Wetherspoons to save money, or it could mean Wetherspoons is more vulnerable – even just a small price rise could deter its more budget-orientated customers.

Earlier this year the company reported that its operating margin was just 0.2%, compared to 8.2% in 2020. Inflation could squeeze these margins further.

It’s not just Wetherspoons though. The cost-of-living crisis has created a slump in earnings for pubs and restaurants across the UK. The number of pubs closing due to the uncertainty doubled in the first half of 2022 compared to the last six months of 2021 – from 254 closures to 485, which is nearly 19 pubs per week.

There are fundamentally two reasons for this: rising energy prices and the rising price of alcohol.

Businesses have now been given an emergency package of support from the government that could help reduce the cost of energy over the winter. But many have argued this doesn’t go far enough, looking for temporary VAT and business rate cuts to sustain business viability in the sector.

The Chancellor Kwasi Kwarteng told MPs last week that alcohol duty rates wouldn’t rise in line with inflation, but pub operators warned that this would just be a bandage over the bullet hole for the hospitability business.

UKHospitality Chief Executive Kate Nicholls said the decision “doesn’t deliver meaningful support to many of the thousands of hospitality businesses which are struggling to identify how they will get through the next six months.”

Where next for Wetherspoons stock?

Wetherspoons has rebounded since hitting 388.4p last week, marking its lowest level in over a decade. That pushed the RSI deep into oversold territory and has attracted buyers back into the market.

Although there are signs that the stock is gaining momentum as it recovers from those lows, the downward channel that can be traced back to May 2021 remains firmly in play. Notably, the channel has narrowed in the last six months as the mid-line has emerged as a rough level of support. We could see the stock climb back toward the 50-day moving average before it becomes more difficult to find higher ground as this has acted as a tentative ceiling since February. A break above 550p, which marked the peak of the last move higher, may install confidence that the downtrend can be broken. From there, the 100-day moving average comes back into play.

Notably, trading volumes have exploded today – with almost 4 million shares trading hands compared to below 680,000 per day over the previous four sessions, which means today could provide a strong signal about which direction is gaining momentum. 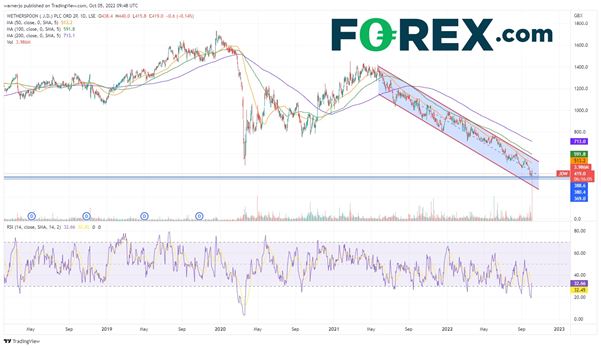 You can trade Wetherspoons shares with Forex.com in just four steps: