Crude oil prices initially fell then rallied to a new 2017 high on the back of the latest oil inventories report from the US earlier. But at the time of this writing, oil prices were coming sharply off their highs again, which suggests prices may have reached a short-term peak. WTI has been trending higher since hitting a low at just above $42 back in June. Lots of resistance levels have been taken out in the process, meaning there will be lots of levels on the way down to potentially support prices. The upsurge has caused the momentum indicator RSI to hit extreme ‘overbought’ levels of around 77. This is a warning sign for the bulls, especially as WTI has reached the key long-term resistance area between $57.00 and $58.80 (see the weekly chart). The bears now need price to confirm that the short-term trend has turned, before they exert pressure in a meaningful way. That could happen soon, possibly as early as today if WTI prints a bearish-looking candlestick pattern on its daily chart by the close of play. If so, we could see a pullback in the coming days, or at least some sort of consolidation. But with the trend being bullish, any pullback could provide fresh opportunity for those who missed the rally to get on board at favourable prices. Specifically, the area between $54.80 and $55.20 is where we would be anticipating WTI to turn positive again, should it get there in the first place. This area was the prior resistance range, so it could now turn into support. But if WTI breaks below $54.00, the last low prior to the latest rally, then the short-term bias would turn decidedly bearish. In this event, a deeper retracement to at least $52.80/85 area would not come as surprise to me. Meanwhile if the bullish run continues, the next objectives beyond the aforementioned $57.00-$58.80 range would be the psychologically-important $60 handle, followed by the 2015 high at $62.55. 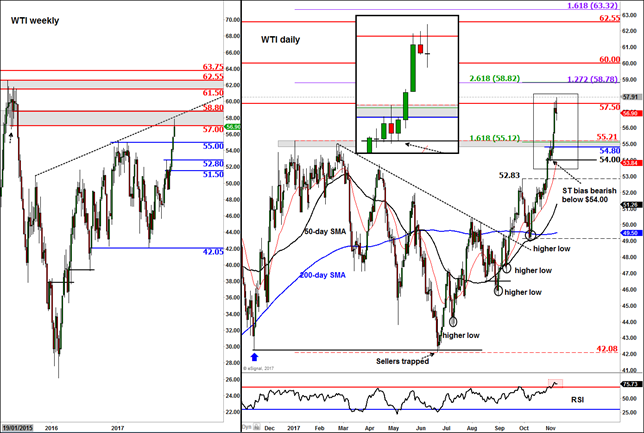