Yen in focus ahead of BoJ

It has been a very busy week for central bank action. The US Federal Reserve hiked rates by 75 basis points; the Swiss National Bank opted for 50 bp hike in a surprise move, while the BoE chose to stick with 25 as expected for the fifth straight meeting of hikes to take the benchmark lending rate to 1.25%. On top of all this, the ECB held an unscheduled meeting to address regional fragmentation risks and calm the bond market rout in weaker, peripheral economies. The Bank of Japan is up next on Friday, and it could steal the show.

Ahead of the Bank of Japan’s meeting, the USD/JPY dropped along with all other JPY crosses. One reason for the strength in yen was the sharp deterioration in risk appetite. The other reason was this: The SNB’s surprise hike piled further pressure on the BOJ to act.

By keeping QE and rates unchanged all this time, BoJ’s inaction has created a significant divergence between Japan’s monetary policy and the rest of the developed world. We have seen yields rise across the world, leaving Japan far behind: 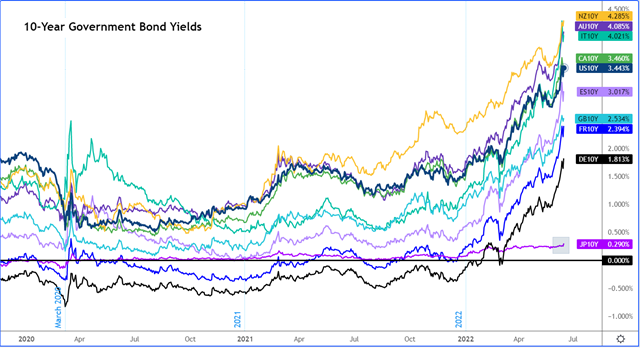 All the recent central bank hikes have put significant upward pressure on JGBs, as investors have increased their expectations that the BoJ will no longer be able to control yields at the above range effectively.

Unsurprisingly, the BoJ's current policy of keeping the 10-year JGB yields in a +/- 25 basis point range around zero has become under heavy pressure. Is the market anticipating a surprise decision? Well, looking at the 10-year yield, you would think that as it has broken the BoJ’s upper band at 0.25% ahead of the rate decision: 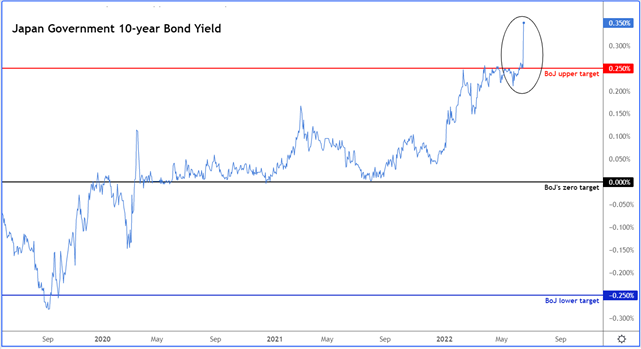 While it is possible that BoJ’s Governor Haruhiko Kuroda may not be tempted to alter its policy amid market pressure at this particular meeting, one thing is clear: the pressure is mounting on the central bank to act.

By keeping its policy loose, the yen has weakened significantly in recent months. A weaker currency means Japan has been importing inflation, especially as oil prices have skyrocketed. If price pressures were to rise further because of the exchange rate remaining weak for a prolonged period, then eventually the BoJ will have to tighten its belt more aggressively.

But it now has the option to drop it is yield curve control at the very least. In fact, if it doesn’t, then it is possible we might see some government intervention if the yen weakness resumes.

In short, Japan's monetary policy response is going to be major source of market volatility, brining the yen crosses in sharp focus as we head towards the latter parts of the week.

Among the yen crosses, the GBP/JPY and EUR/JPY are good ones to watch if you are expecting some action from the BoJ or Japanese government on Friday.

The GBP/JPY has broken its short-term bullish trend line following this week’s sell-off in risk assets. The bullish trend came to an abrupt halt for the GBP/JPY when rates failed to hold the breakout above the previous high at 168.43. But more than 600 pips lower, the psychologically-important 160.00 handle has offered some support – for now. 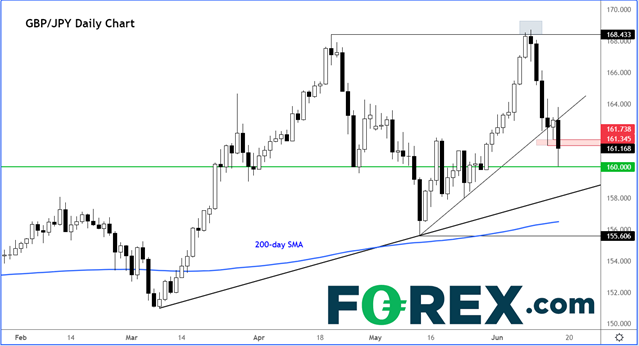 At the time of writing, the GBP/JPY was re-testing broken support around 161.15-161.35 area. If it holds below here, then the short-term path of least resistance will remain to the downside heading into the BoJ meeting. The next downside target is the longer-term trend line at around 158.00, below which lies the 200-day average at 156.50.

If the BoJ decides to do nothing, then the yen could find itself under intense pressure again, which could see the GBP/JPY reclaim the broken trend line. If it does, then a fresh rally towards 168.00 could get started.

However, as mentioned, inaction by the BoJ may prompt intervention from the government.