2022 Conservative Party leadership election: What’s at stake for the FTSE?

Earlier this week, we discussed the political backdrop, candidates, and expected policies for traders to watch around next month’s UK Conservative Party leadership election (see “2022 Conservative Party leadership election: Who will be the UK’s next PM?” for more). Now, we wanted to examine how a victory by either candidate could influence the FTSE 100 index (UK 100).

Before we get too deep, it’s important to note that traders generally overestimate the impact of politics on markets; after all, politicians often have to “water down” their proposals to get them passed through the rest of the government apparatus and the majority of factors that drive markets on a day-to-day basis sit well outside the realm of politics. Factors like international trade, monetary policy, supply chains, business confidence, and the complex interactions of millions of traders across the globe tend to have a bigger influence on markets than any individual politician’s policies, even if that politician is the Prime Minister!

The other reason asset prices tend to see less movement around elections than many traders expect is that markets are always forward looking. In other words, traders don’t wait until an election is concluded to start trading on it; indeed, since the moment of Boris Johnson’s resignation (and likely before), traders have been anticipating who the next Prime Minister will be and the policies that he or she will ultimately be able to enact.

With Liz Truss currently enjoying a healthy lead in the polls, we may see more limited market moves if she ultimately prevails as traders are already “pricing in” that scenario; by contrast, a surprise victory by Rishi Sunak would catch more traders offside and may lead to more volatile price adjustments.

Truss or Sunak: Who is better for the FTSE?

When it comes to their economic policies, the clearest difference between the two UK PM candidates revolves around the level of government spending. As we outlined in our initial article, Truss is in favor of immediate tax cuts and more aggressive increases in defense spending, whereas Sunak has expressed a desire to get inflation under control first, then consider increasing the government deficit.

The other major policy difference of note for equity traders is around the climate and green energy. Both candidates support the UK’s transition to net zero by 2050, though Sunak’s environmental bona fides appear more serious. Whereas Truss has indicated she would review the ban on fracking and cut subsidies for solar farms when she was the environment secretary, Sunak has come out in support of new windfarms and proposed a legal target to make the UK energy self sufficient by 2045.

If enacted, these policies could have big implications for individual industries like the defense and energy sectors, but their impacts on an index level are more difficult to parse. On balance, Truss’s apparent support for more aggressive fiscal stimulus could provide a short-term boost for the FTSE 100, though any pressure she is able to put on the BOE to raise interest rates more aggressively may offset that tailwind over the coming quarters. In contrast, a surprise victory by Sunak could see stocks fall initially as hopes of an immediate dose of fiscal stimulus fade.

As the chart below shows, the FTSE has had a choppy year so far in 2022. After falling nearly 1,000 points in a Q1 swoon, UK stocks have recovered off their lows to carve out a range between support around 7,000 and resistance up at 7,700. Over the past couple of weeks, the index has shown relative strength against its US and European rivals, suggesting that traders aren’t spooked yet by the prospect of double-digit inflation and a potentially long recession in the UK.

With a few weeks still to go before the election, this range is likely to contain prices for at least a bit longer, but when the index finally picks a direction and breaks out, trend-following traders could look to play a continuation in the same direction heading into 2023. 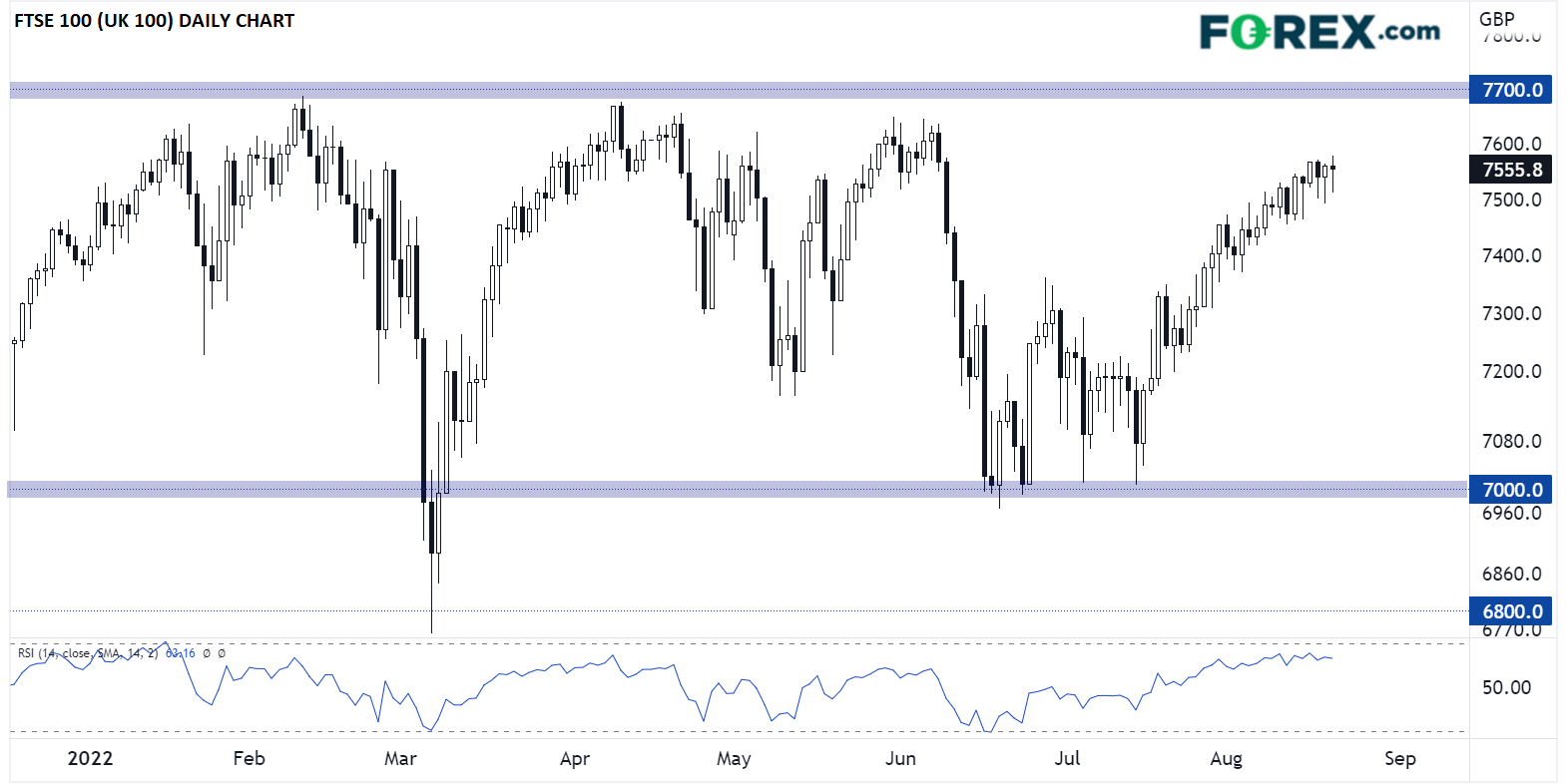