Avon Rubber said trading has remained in line with expectations since its last update in December as it continues to secure orders for its personal protection gear around the world.

The company said it had seen ‘positive order momentum’ in its Military, First Responder and Team Wendy businesses whilst progressing work on body armour designs under two contracts with the US army.

Its Military division has won further orders from NATO and it is expecting orders from the US Department of Defence during the first half of 2021. It warned the contract to make the next-generation headwear for the US army is being re-tendered following protests, but said it still believes it has the ‘optimal solution’ to win it. Either way, it does not expect that to make an impact until 2023 at the earliest.

The First Responder unit has continued to benefit from strong demand for its respiratory protection range of products in light of the pandemic. Team Wendy, which makes helmets, has continued to perform well since being acquired a few months ago for £100 million and is continuing to report strong order intake.

As a result, Avon Rubber said it expects to meet expectations for the full year.

Avon Rubber has jumped over 3% in early trade after bouncing off 3000 a level which is also offered support back in late December. The double bottom reversal points to a change in trend and momentum reversal.

On the downside 3000 appears to be a solid support. Should the share price manage to break through here it would bring 2850 horizontal support into focus and 2665 June’s low into target. 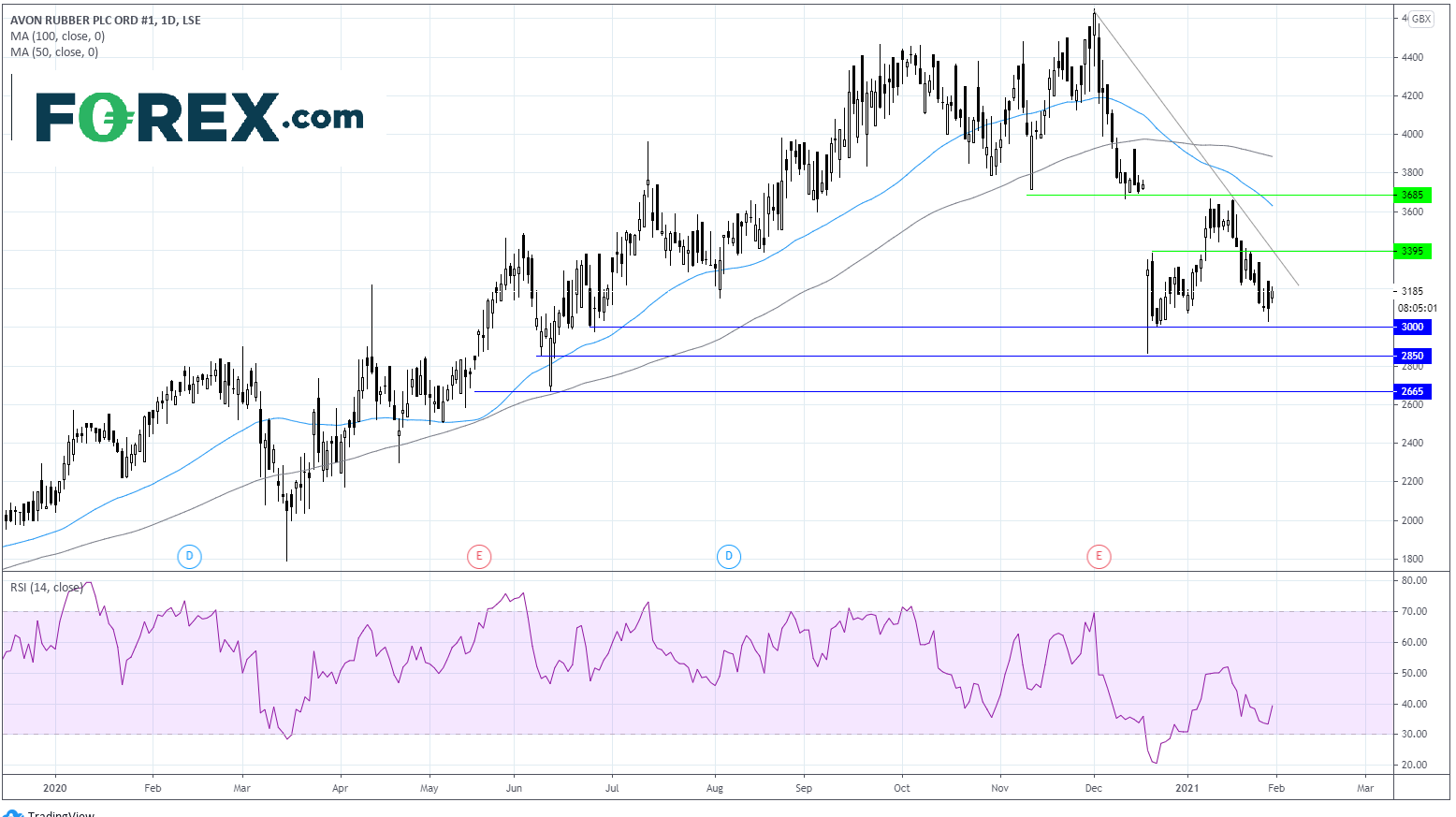 The London Stock Exchange Group said it has formally completed its acquisition of Refinitiv.

The £22 billion all-share deal means Refinitiv shareholders now have around a 37% economic interest in LSEG and a 29% voting interest. A number of Refinitiv board members, including Martin Brand, Erin Brown and Douglas Steenland, have also joined the board of LSEG.

‘Completion of the acquisition of Refinitiv marks an important milestone in LSEG's history. I am delighted to welcome our new Board Directors, shareholders, executive management and all the new Refinitiv colleagues joining LSEG. This transformational transaction brings together two highly complementary global businesses with a shared commitment to an Open Access philosophy, working in partnership with customers,’ said LSEG’s chief executive David Schwimmer.

‘LSEG is focused on delivering the benefits of the transaction helping customers to access data, trading tools, analytics and risk management across the financial markets and at scale around the globe. LSEG is well positioned for long-term sustainable growth in a rapidly evolving landscape as a leading global financial markets infrastructure and data provider,’ he added.

Sales of semi-finished steel products rose 6.1% in the year as it exported more goods to offset a decline in demand in Russia. Finished product sales fell 10.1% after it sold off one of its businesses in 2019 and because of lower demand for tubular and flat-rolled products in North America.

Raw coking coal production was down 21% in 2020 as it stopped mining at Razrez Raspadsky between May and September and thanks to the Mezhegeyugol mine being made idle. External iron ore product sales jumped 52% in the year and vanadium product sales dipped 2.2%.

Polymetal said it produced more gold than expected in 2020, allowing it to capitalise on higher gold prices during the year.

The company, which operates in Russia and Kazakhstan, said it produced 1.55 million ounces of gold equivalent in 2020, up 4% from the year before and also 4% ahead of its guidance. It said the stronger than expected output was driven by strong contributions from the Kyzyl, Varvara and Albazino mines, which offset expected declines in grade at Svetloye and Voro.

Capital expenditure, however, will be around 10% higher than the $590 million budget for 2020 because of additional costs to minimise disruption from coronavirus and increased stripping. Spending is expected to fall to $560 million in 2021.

Airtel Africa said revenue and earnings growth both accelerated in the third quarter of its financial year but warned that coronavirus restrictions could hamper its efforts going forward.

The company said revenue grew 19.5% in the three months to the end of December whilst underlying earnings before interest, tax, depreciation and amortisation jumped 22.5% - considerably faster than the first two quarters that were harder-hit by coronavirus restrictions.

Revenue for the first nine months of the financial year was up 13.8% to $2.87 billion as a result, with underlying Ebitda growing 16% to $1.29 billion. Its free cashflow increased 20% to $466 million and the company said it intends to keep paying dividends after starting payouts in 2020.

It now has 118.9 million customers in total, up 11% from the year before, as it continues to penetrate the money services and mobile data markets.

‘While the Covid-19 pandemic has had little impact on our most recent quarter, we remain vigilant about the recent news flow around new strains of the virus and further actions by governments to minimise contagion in our countries of operation. The opportunities for sustainable profitable growth from our underpenetrated markets for both mobile and mobile money services remain hugely attractive, and we are confident of continuing to deliver on our growth strategy,’ said chief executive Raghunath Mandava.

Sirius Real Estate said it has collected 98% of all the rent and service charges due from its 5000 tenants during 2020, with the rest being deferred or written off.

Some landlords have struggled to collect rents from tenants during the pandemic as lockdown restrictions keep people at home, but the company’s focus on business parks, offices and industrial sites in Germany has allowed rent to keep coming through the door.

It said it had written-off just EUR205,000 of over EUR141 million worth of rent and charges during the year.

For the nine months to the end of December, it has collected 97.7% of all rent and charges due.

‘Since the outset of the pandemic, we have allocated increased platform resources and focus towards supporting our occupiers through the challenges they have faced. This active engagement has served us well, enabling us to demonstrate the additional value we can provide to our customers, while also ensuring that we have been able to maintain good cash collection levels in the region of 98%,’ said chief executive Andrew Coombs.

‘Our enquiries, sales and cash collection performance, as well as the robust commitment of the German government to supporting business throughout 2021, give us confidence in our ability to continue to trade well through the Covid-19 environment. With total cash balances in excess of EUR70.0 million the company has the capacity to continue to make acquisitions as opportunities arise,’ he added.

CLS Holdings said it has agreed to purchase three office buildings in Dusseldorf, Berlin and Hamburg for a total of EUR89.7 million, excluding costs, from Commodus Real Estate.

There are 31 tenants in the three buildings and boasts an occupancy rate of 93%. Notably, CLS said the average rent is currently 22% lower than average rents and that there is an ‘opportunity to actively manage the assets to bring the rent to market levels over the medium term.’

The net initial yield on the three properties if 4.8% with a revisionary yield of 6.1%.

BMO Commercial Property Trust said it continues to collect the vast majority of rent due from its tenants but warned the retail and leisure sectors continue to struggle.

The trust said it collected 87.1% of rent due between March 26 and December 1, but only 75.1% of the rent due for the first quarter of 2021. Tenants of industrial sites have paid 99% of their rents while office tenants have paid over 95%. However, less than two-thirds of rent due from retailers has been collected and only 83% from warehouses.

BMO Commercial Property said it still intends to pay an increased monthly dividend going forward after increasing payouts last month, although said it was monitoring the situation considering the uncertainty that hangs over many of its tenants.

BMO Commercial Property Trust shares were down 3.6% in early trade at 76.7.

Puretech adds president to executive board

PureTech Health said its president and chief of business strategy Bharatt Chowrira will become an executive member of the board on Monday.

‘Bharatt has made a big impact since joining PureTech in 2017 and he continues to make key contributions as we advance our clinical pipeline toward key value-driving milestones,’ said founder and chief executive Daphne Zohar. ‘We are pleased to have him join our board of directors as one of the three representatives of our executive team’.