Traders may need to be patient until the BOE meeting Thursday

After spending the long winter months in lockdown, the UK is finally open for business! Nearly two-thirds of the population have received at least 1 shot.  Non-essential businesses, outdoor pubs and restaurants reopened on April 12th, and on May 17th more restrictions will be lifted, including indoor facilities and sporting events.  In all, the UK is expected to have all restrictions lifted by June 21st!  The economic data for March has already showed that business is booming.  March retail sales were up 5.4% vs an expectation of 1.5% and Manufacturing and Services PMIs were 60+, at their best levels since the pandemic began.  Strong data is expected to continue . But the biggest event of the week will be the Bank of England meeting on Thursday. The BOE currently is utilizing a targeted 875 billion Pound bond purchase program, however they are expected to reach that level before the target date at the end of the year.  Therefore, with the strong recovery and expectations that the vaccinations will continue, the BOE may signal that they will reduce the pace of their bond buying (taper) so as not to increase the limit. (They have increased the limit before, so it wouldn’t be surprising if they do it again).

The Fed has been pounding the table to tell everyone that it will be a while before they reach “substantial further progress”, which would give them the green light to begin tapering.  With the dual mandate to control inflation and maximize employment, the Fed has noted that they need to see a “sting of months” of ACTUAL data (not just forecasted) before they will taper. Fed Chairman Powell indicated last week at the FOMC press conference that the committee has not even begun to discuss tapering!  On Friday, the US will release Non-Farm Payroll data.  Expectations are that this will be the second month in a row the headline print will be strong (900,000+).   If it comes in as forecasted, with a strong Average Hourly Earnings component, traders need to consider how many more months the Fed needs for a ”string” of data.

What are Non-farm payrolls?

GBP/USD had been in an upward sloping channel since September 2020. The pair broke above the top trendline on February 21st, only to form a shooting star on February 24th and pull back .  As is often the case, when there is a failed breakout on one side of the channel, the pair will come back and test the other side. GBP/USD pulled back to near the 38.2% Fibonacci retracement level from the September 23rd lows to the February 24th highs, just above 1.3670.  On the move to test the bottom side of the channel, the pair also appears to be forming a shorter “corrective” channel (red).  There is a confluence of resistance between 1.3980/1.4000, which is made up of the bottom upward sloping trendline of the long-term channel, the top downward sloping trendline of the shorter-term channel, and horizontal and psychological resistance at 1.4000. 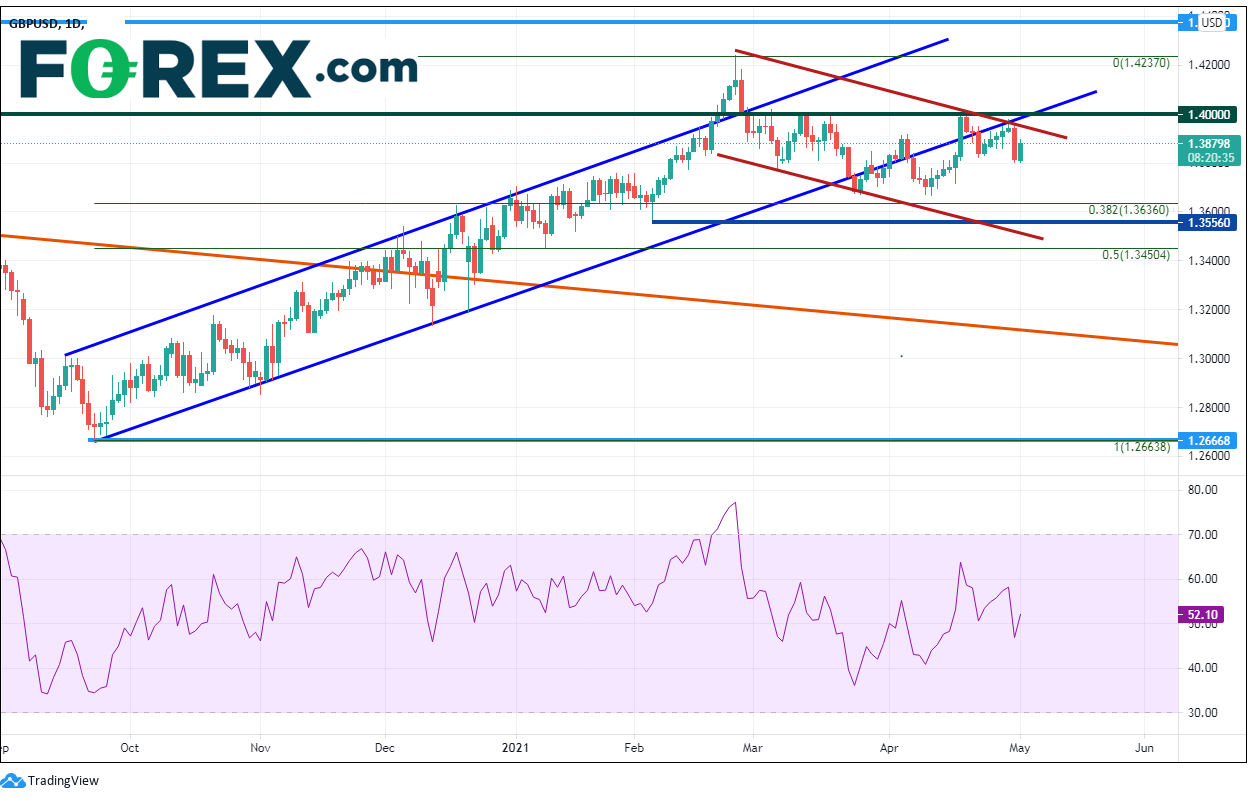 With the BOE meeting on Thursday from the UK and Non-farm payrolls on Friday, GBP/USD may have some volatility this week.  However, traders may need to be patient until Thursday, especially with the UK holiday on Monday!