After a strong March, US 10-year yields and USD/JPY may be ready for a pullback

When the Fed met at its March 16th FOMC meeting, 10-year yields were already on the rise.  However, at the meeting, the FOMC noted that ongoing increases in Fed Funds rates are appropriate.  In addition, it said that it expects to begin reducing the size of the balance sheet at an upcoming meeting.  After the meeting, Fed speaker after Fed speaker came out all whistling the same tune: a 50bps hike is on the table and the Fed most likely will begin reducing its balance sheet at the May meeting.  Inflation data continues to soar, as noted by today’s Core PCE print.  According to the CME Fedwatch tool, the market is currently pricing in nearly a 70% chance of the 50bps hike at the May meeting.  As a result of the hawkish Fed talk and the increase in inflation, yields have been on the rise during March. 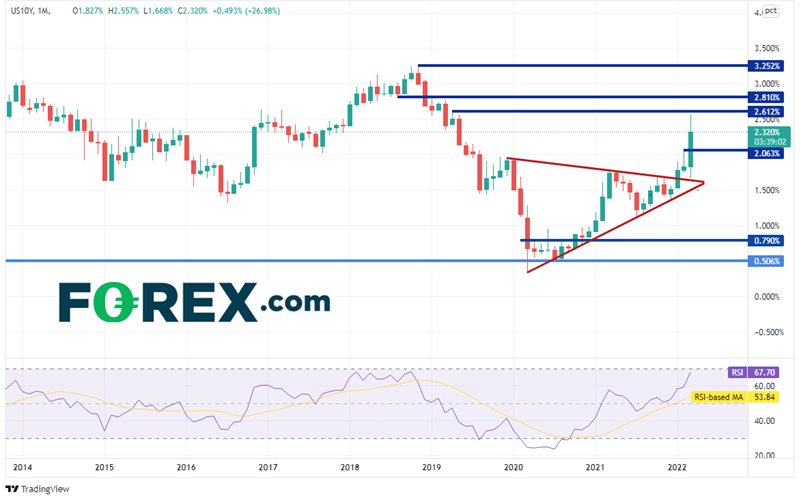 USD/JPY has traded on a similar path to that of US 10-year yields, especially since the middle of March.  Notice at the bottom of the chart below that the current correlation coefficient between USD/JPY and US 10-year yields is +0.96.  A reading of +1.00 means that the 2 assets move in the same direction 100% of the time.  A reading of +0.96 is pretty close.  So, if one wants to take advantage of the move in yields, one way to trade it could be via USD/JPY.  On a daily timeframe, USD/JPY had been trading in an upward sloping channel since early 2021.  The pair broke higher above the channel on March 11th near 118.21 and continued moving higher to 125.10 earlier this week.  Since then, price has pulled back and thus far, is holding support above a trendline dating back to 2002 (green line) and the 38.2% Fibonacci retracement level from the low of March 4th to the high of March 28th near 121.10. 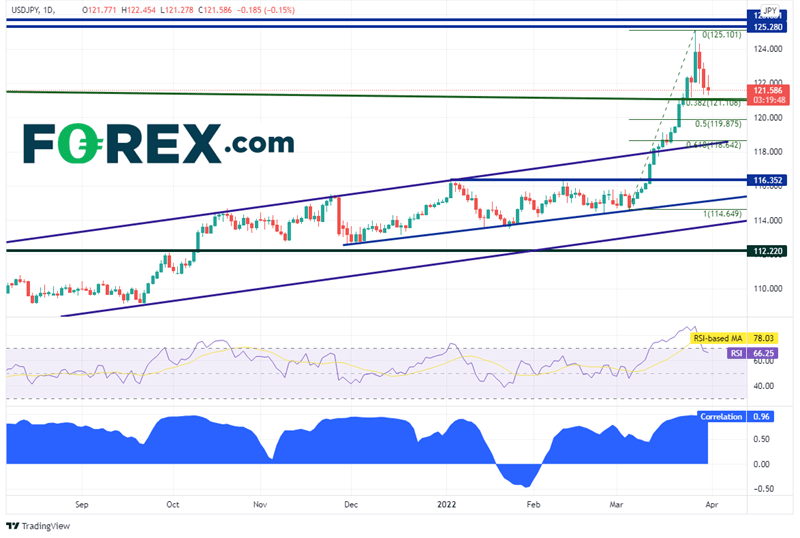 On a 240-minute timeframe, notice that the correlation coefficient between USD/JPY and 10-year yields is still high at +0.88.  Readings above +0.80 are considered strong. USD/JPY appears to be setting up a head and shoulders pattern.  A break of the neckline at 121.25 would put the pattern into play.  The target for a head and shoulders pattern is the distance from the head to the neckline of the pattern, added to the breakdown point, which would be near 117.40.  However, first it would have to trade below horizontal support levels at 120.59, 119.12, and 117.70.  Resistance above is at the top of the right shoulder near 123.15, then at the head near 125.10. 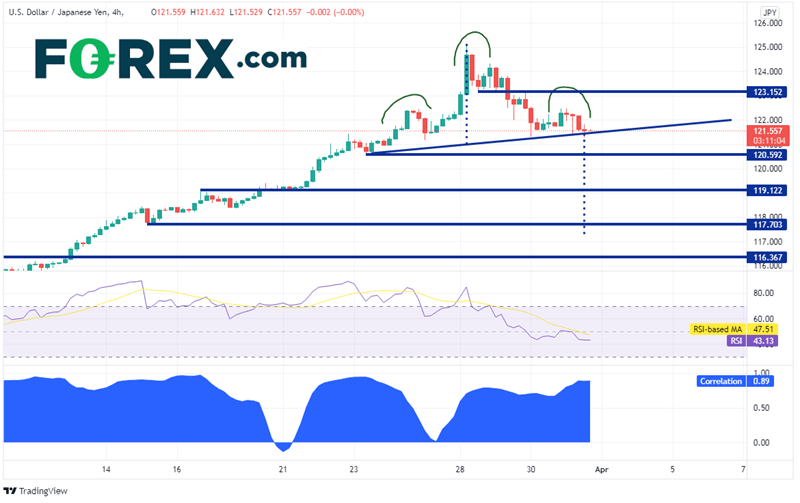 Due to recent increases in inflation (partly due to the Russia/Ukraine way) and the hawkish fed talk, US 10-year yields have been going bid.  As a result of the high correlation with USD/JPY, yields have been pulling USD/JPY higher with them. However, both have pulled back a bit, with USD/JPY forming a potential head and shoulders pattern.  Watch to see if the pair breaks the neckline.  If so, both USD/JPY and US 10-year yields could be lower in a hurry.