Asian Open: Powell on board with a March hike, AUD/JPY taps YTD high 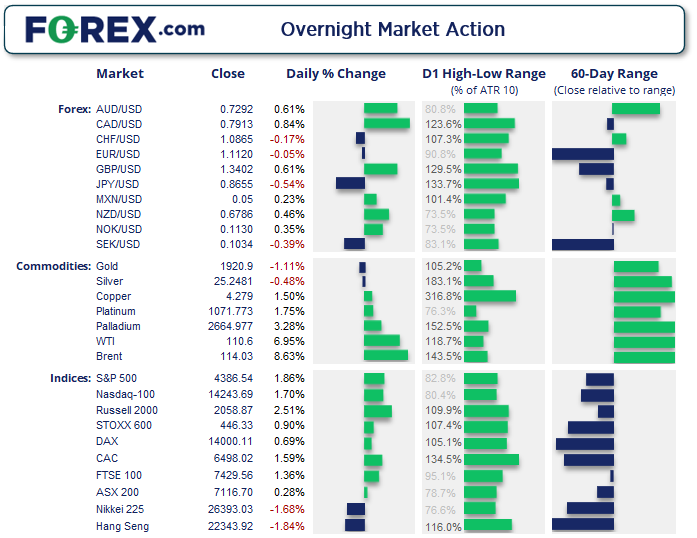 There had been some speculation that the Ukraine crisis could prompt the Fed to either hold off from raising rates, and / or lower the trajectory of subsequent hikes. Yet Jerome Powell became the latest voting member to confirm the March hike is still on, although he also said they will “proceed carefully along the lines of that plan”, referring to a series of hikes. This was taken well by Wall Street, which saw major indices rise in tandem, although the dollar was lower which allowed commodity currencies also rise. Although the BOC’s hike saw CAD take the top spot.

A hawkish hike from the Bank of Canada (BOC) saw them raise interest rates by 25 bps to 50 bps, and hold the view rates will likely need to be raised further. They are still considering when to end their ‘reinvestment phase’ and begin quantitative tightening. Q4 growth confirmed their assumption that economic slack had been absorbed, and Q1 growth appears to be more solid than anticipated. Whilst economies have recovered from the Omicron variant quicker than expected, the Ukraine crisis is a renewed source of uncertainty. CAD was the strongest major, EUR/CAD fell to a 5-year low and traded beyond our downside target.

Putin is testing the waters - or this in this case, testing the airs – with four Russian jets reportedly flying over Sweden’s airspace. But as flamboyant as this seems, Sweden are not a member of NATO, who have a military alliance meaning an attack on one member is an attack on all. So a clear signal that Putin has upped the ante is when if hear of fighter jets flying over NATO airspace. Sadly, we wouldn’t put it past him.

The Australian dollar enjoyed a decent session thanks to its strong GDP report but also tracked Wall Street higher. Whilst AUD/USD initially dipped towards 0.7237 support, it did not break to the downside to confirm its next leg lower and is now teasing a break of 0.7300. Yet due to several technical levels nearby the reward to risk ratio is undesirable over the near-term in our view. 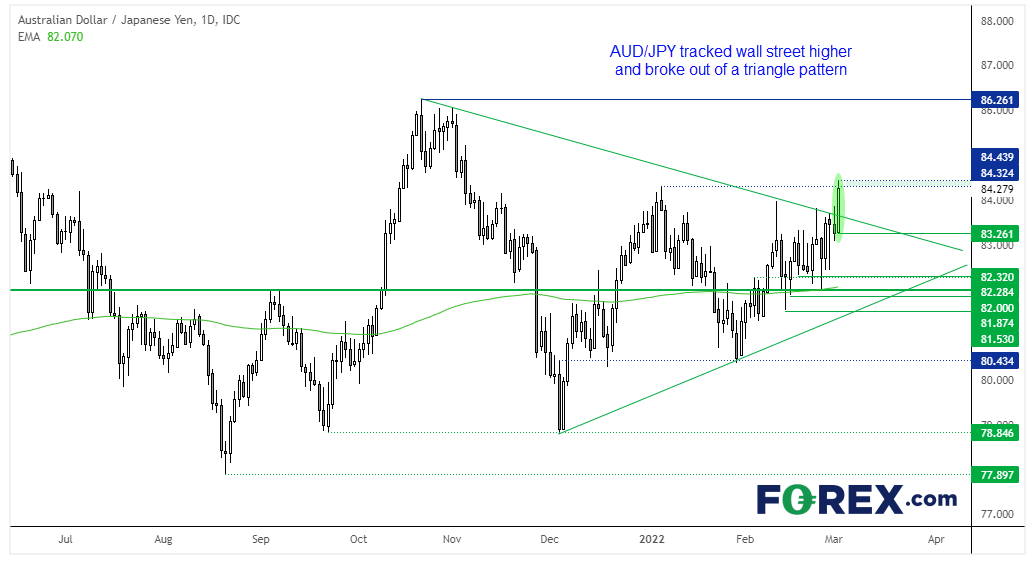 However, AUD/JPY rose it its highest level this year and close above trend resistance to confirm a triangle breakout. Our bias remains bullish above 83.0 and a break above yesterday’s high targets 86.0. We are taking the triangle with a pinch of salt as they’re generally more reliable with a trend leading into it, which is not apparent in this case. But it has cleared the trendline, and should appetite for risk remain elevated then our bullish bias remains.

Oil prices continue to rise at break-neck speed, with WTI on track to close above $112. Its trend is now in a parabolic stage – which rarely end well and usually complete with what is known as a ‘blow-off top’. But there is no way of knowing if we are close to any sort of top with the geopolitical landscape. And trying to nail a market top with such strong bullish momentum is akin to trying to catch a falling knife.

The ASX 200 was one of the few major Asian indices to scrape a gain yesterday, thanks to a strong GDP report. Its back above 7100 and reaffirmed support at 7042.80 (which was previously resistance). Futures point to a higher open and Wall Street is up so, going into today’s session, we have a bullish bias on the day. And a daily close above 7160 puts the bulls firmly back in control. 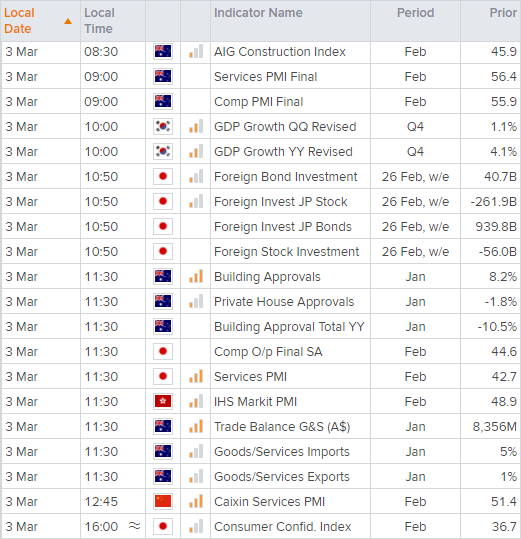