AUD/JPY breaks out ahead of Aussie CPI, BOJ

Thanks to ongoing risk-on sentiment, the AUD/JPY has been squeezing higher with the safe-haven yen on the backfoot and risk-sensitive Aussie dollar on the front. This currency pair will be one the most important to watch this week due to the upcoming release of market-moving data from Australia and China, as well as the Bank of Japan’s interest rate decision.

From Australia we will have the latest reading on quarterly Consumer Price Index in the early hours of Wednesday, at 12:30 GMT. Headline CPI is expected to come in at +0.5% q/q compared with +0.6% in the previous quarter. Trimmed Mean CPI meanwhile is again expected to print +0.4% q/q as it did previously. The other important Aussie data due for release this week is building approvals, due at 12:30 GMT on Thursday. Meanwhile from China, we will have the official manufacturing PMI at 01:00 GMT Thursday, while the Caixin Manufacturing PMI will be released at 01:45 GMT on Friday. If, on the whole, these numbers are in line or above expectations then the Aussie should remain supported. However, if we see a couple of big misses then it could derail the rally.

Bank of Japan may hold off introducing more stimulus

Perhaps the most important fundamental event in so far as the AUD/JPY is concerned will be the Bank of Japan’s rate decision on Thursday. The pressure is growing on the central bank to provide more policy accommodation due, above all, to the recent falls in exports. Governor Kuroda has pointed to the possibility of additional easing and last month the bank promised to take a more thorough look at the economy before its October meeting. However, there are doubts as to whether the BoJ will make its move at this meeting, with some market commentators suggesting the central bank may decide to save the ammunition for a time when economic conditions are even worse. What’s more, concerns about a global slowdown have eased somewhat in recent weeks with the apparent progress in US-China trade talks. So, waiting a bit longer may make more sense. Still, the AUD/JPY bulls will be happy for as long as the BoJ is not unexpectedly hawkish. 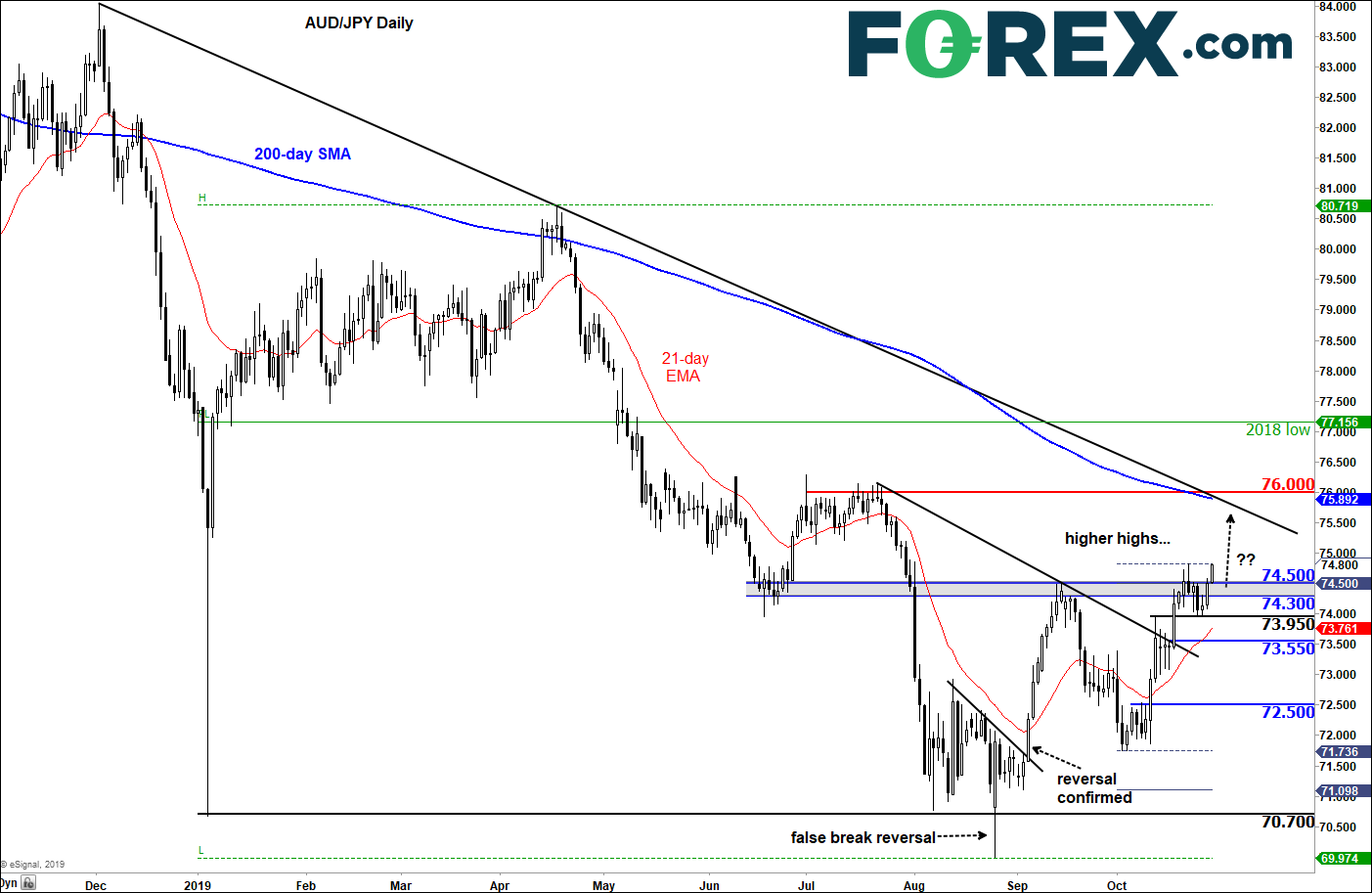 From a technical point of view, the AUD/JPY is continuing to show bullish price action ever since that false break down attempt on 26th August. That is when rates broke below old lows around 70.70 before being rejected immediately. The reversal was confirmed several days later when rates broke above a short-term bear trend. We have since seen a couple of more bullish confirmation signs, including price making higher highs and higher lows. You get the picture.

Now over the last few days, rates have cleared sturdy resistance in the 74.30-50 region. This is important because it is a further blow to the bears, meaning the rally could accelerate should the fundamental backdrop continues to remain supportive for this pair. The 74.30-50 region is now going to be the first line of defence for the bulls. For as long as rates hold above here, the path of least resistance would remain to the upside. As things stand, I think the AUD/JPY could be headed towards the longer-term bearish trend line which happens to converge with the 200-day average around 75.90 area.

However, if rates break lower again and take out the most recent low at 73.95 then in that case the bullish idea would have to be put to the back burner.