It was another bearish session for crypto traders yesterday as the US dollar and yields continued higher whilst Wall Street and sentiment in general moved lower. And that has driven Bitcoin down to a key support, otherwise known as its YTD low on the futures charts. 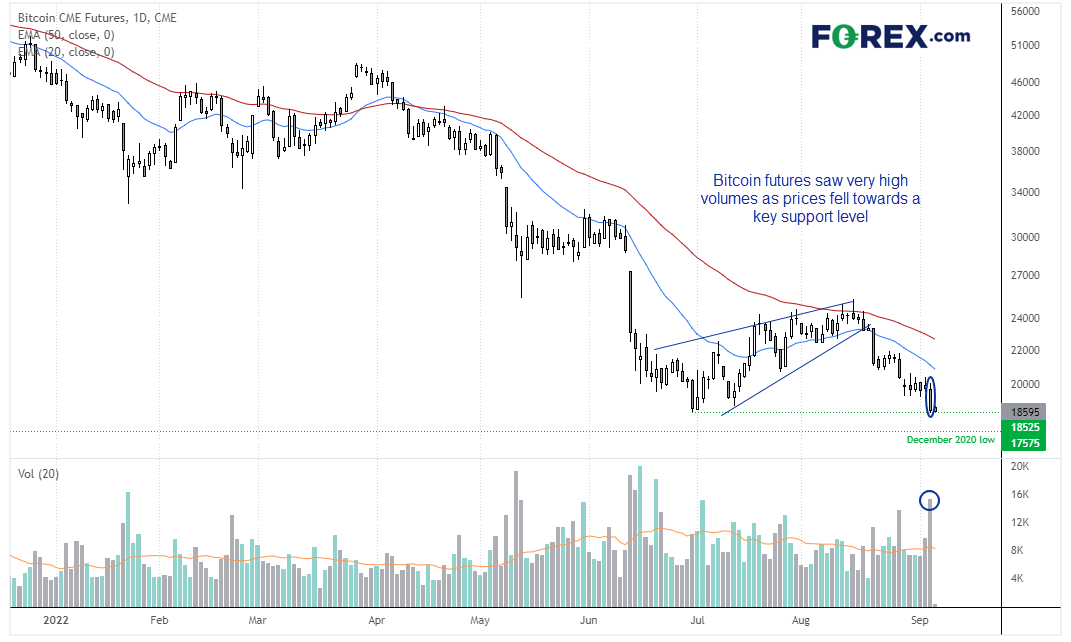 The daily chart is clearly within a downtrend, and prices broke out of a small consolidation yesterday and reached a bearish target projected form a rising wedge pattern. However, what has really grabbed my attention is how volumes were rising into the YTD low (18,525) which suggests bears were loading up in anticipation of a bearish breakout.

With bears having clearly made their intensions known, it could prompt further selling should prices break this key support level. Yet to counter that, should we see a false break and / or reversal higher, it could also prompt those pre-emptive bears to close out and create another leg higher. In short, volatility is likely to be on the horizon whichever way it moves from here.

Keep an eye on the intermarket relationships

Clearly a relatively large component of Bitcoin’s demise has also been the surging US dollar. But other factors are also at play. We can see that USD/JPY and USD/CNH have shared a very strong (inverted) correlation with Bitcoin since early August, where each break higher on these pairs is usually accompanied with a move lower for Bitcoin, more or less around the same time. It’s therefore worth keeping a close eye on these markets to help gauge the likelihood of Bitcoin continuing to move lower.

Pay close attention to what BOJ, MOF or PBOC say about their currencies

At the time of writing, USD/JPY trades above 143 for the first time since 1998 and is attempting to move to 144. USD/CNH has also risen to its highest level since August 2020 and is currently within its seventh bullish month. Yet the higher these pairs move, the greater the risk of some sort of intervention from their respective central banks.

Japan Minster of Finance has been hitting the wires this week to remind markets that’s its not desirable for FX markets to move too rapidly. As the BOJ quite like a weak currency, it means a rising USD/JPY should be ok as long as its speed is not too fast. Given the yen has depreciated against the US dollar by ~25% this year already, and the Minster of Finance is getting fidgety, we may be closer to FX intervention than some would like to believe.

Furthermore, the PBOC (People’s Bank of China) announced this week that they will cut the FX reserve ratio for banks to help reduce the depreciation of their currency. It’s not due to take effect until September the 15th, so this does allow for USD/CNH to continue higher. 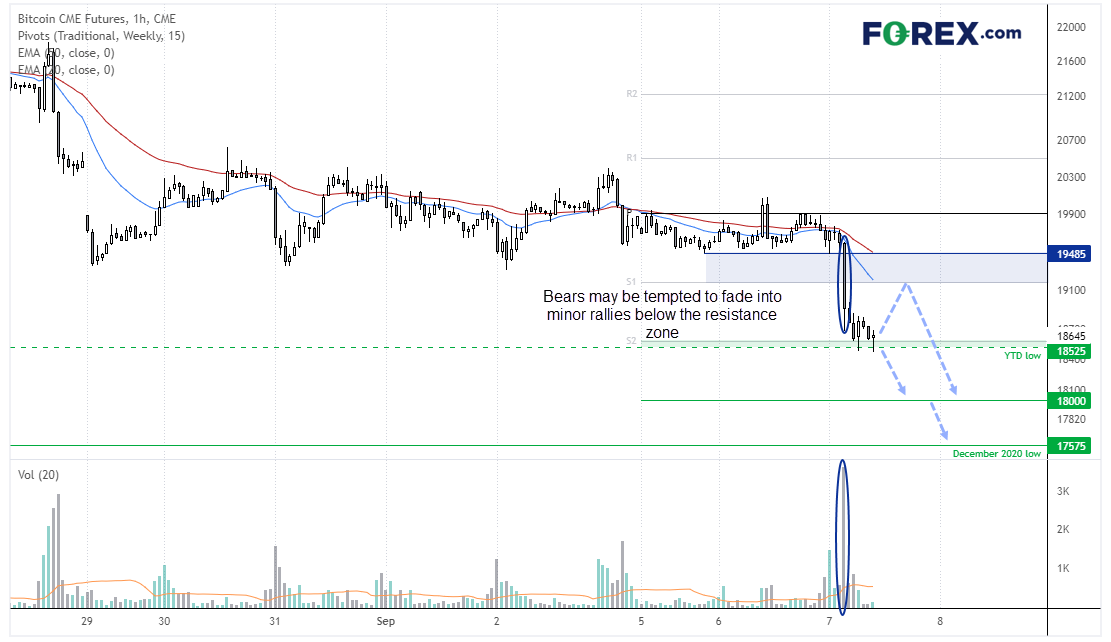 We can see on the 1-hour chart that bears stepped in ahead of a break below 1900 and prices have so far remained beneath it. There seems to be no immediate appetite for a break of the YTD low with volumes almost non-existent, so the longer that key level holds the greater the odds favour a correction higher.

Therefore, I suspect any low-volatility retracement towards 1900 / the resistance zone just above it might tempt fresh shorts to enter. At which point we could seek evidence of a lower high for a potential swig trade. A break beneath yesterday’s lows brings $1800 into focus, a break of shifts our attention to the December low around 17,575.