BOE in focus but will it be a Super Thursday for sterling?

Super Thursday is here, but will the Bank of England deliver anything noteworthy today? At 12:00 GMT, the BoE will publish its decision on interest rates, meeting minutes and the inflation report. While interest rates are almost certain to remain unchanged until at least late spring or early summer, there may be some surprises in the policy statement, votes, or inflation report. If the BoE revises upwards its inflation projections then this could help to boost the pound. But the MPC is likely to re-iterate that inflation will return to target as the impact of temporary factors fade. However, we may see some upbeat forecasts on GDP.

In term of market reaction, the GBP/USD is probably not the best pair to watch for signs of pound strength given the dollar’s recent rebound. Instead, a GBP cross, such as EUR/GBP may be the better option. But for me, the GBP/CAD looks even better. That’s because of the recent rise in the US dollar and the simultaneous sharp falls in crude prices, delivering a double whammy for the Canadian dollar, which helped to push the USD/CAD into the positive territory for the year. For me, it makes more sense to play the GBP against the weakest of currencies out there, if you are anticipating the GBP to appreciate.

The GBP/CAD also looks technically bullish – for the time being, at least – as it trades above its main moving averages and after having formed a series of higher highs and higher lows since September. Ahead of the BOE’s rate decision and tomorrow’s release of Canadian employment figures, it is consolidating inside a pennant around the pivotal 1.7500 resistance level. If we clear this hurdle this week then the GBP/CAD could be in for some noticeable gains next week. Conversely, if it turns around and closes the week below 1.7350 support then this would render our short-term technical bullish views invalid. 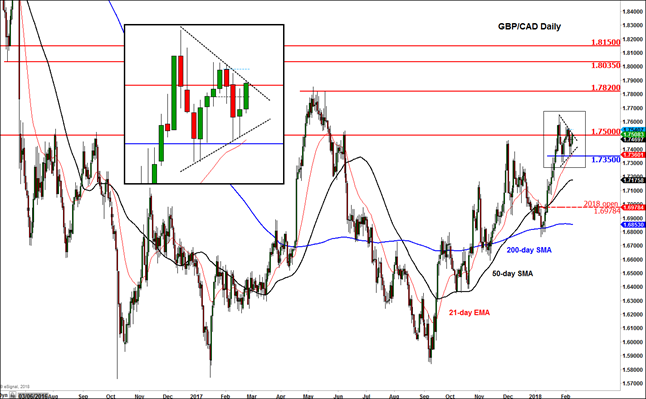