So, the Bank of England finally intervenes after coming under so much pressure to act as they saw borrowing costs soar, while bonds, sterling and the FTSE all got a hammering. In response, we saw the FTSE jump over 100 points after being down as much as 2% earlier in the session, while bond yields plunged as traders sold gilts. The pound however was unsure how to react as bond buying will increase the supply of pounds in the market. Initially, the GBP/USD jumped on the announcement but within a couple of minutes, it fell to a fresh session low.

The BoE’s intervention is an attempt to soothe investor nerves after they were spooked by last week’s mini budget. The bank was worried about a “material risk to UK financial stability,” and so it has stepped in to temporarily carry out purchases of long-dated UK government bonds from today at an “urgent pace.”

It has been an extraordinary few days in the financial markets, in particular for UK assets. It all started when the BoE decided to hike rates by just 50 basis points despite double-digit inflation in the country. Then the new chancellor Kwasi Kwarteng announced radical borrowing-fuelled £45-billion tax cut spree. The “tickle-down” package of tax cuts were heavily criticised, with many saying it is not going to solve the issues facing the economy.

Even the IMF weighed in on issue, urging the government a rethink as the measures “increase inequality.”

Global financial markets have seen significant volatility in recent days, so the BoE’s objective is first and foremost to restore orderly market conditions.

Will they be able to do that remains to be seen? But after Bank of Japan’s intervention in the FX markets last week, today’s move by the BoE may be the start of more such measures to come from other central banks.

While the UK bond market may calm down due to the actions of the BoE, let’s not forget that this is possibly not the best news the pound needed.

The supply of pounds as a result of the BoE’s intervention will increase at a time when the government has also announced a huge tax cutting bill. This will not help bring inflation down, but will have the opposite impact, ceteris paribus.

Thus, the GBP/USD could still be heading further lower. If support around 1.0670ish breaks, which looks likely in my view, then a drop to the next support around 1.0570ish will be the immediate objective for the sellers. This area marks the 61.8% Fibonacci level against the recent bounce. Thereafter the 1.05 handle comes into focus, and if that breaks then we could be heading for a retest of Monday’s all-time low. 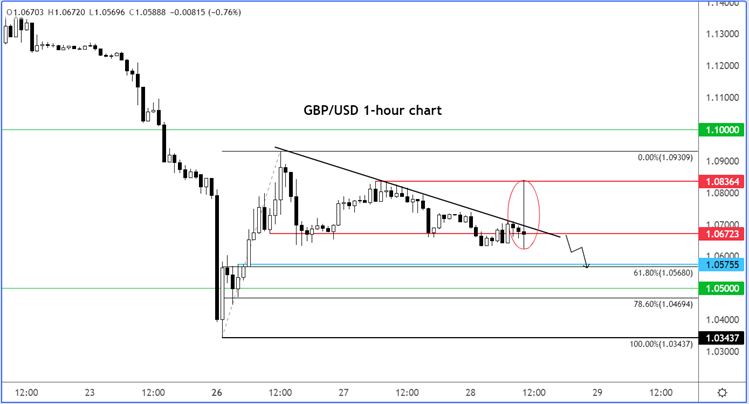 On the upside, the key level of resistance is at 1.0845ish – the high that was created post the BoE announcement. If that level gives way, then we could be heading towards 1.10 as the shorts scramble to cover their positions. But given that the trend is bearish, we will not focus on the upside until the charts tell us otherwise.

HERE is how to take advantage of the downtrend.
Related tags: Trade Ideas Bank of England BOE Forex GBP USD