A 25-basis-point rate hike from the Bank of England’s Monetary Policy Committee on Thursday looks like a foregone conclusion, and so investors’ focus will be on any hints about further increases in borrowing costs in the upcoming meetings and on quantitative tightening. What’s also certain is that there is no press conference scheduled for this meeting. Furthermore, this will come hot on the heels of the Federal Reserve’s rate decision that will take place the day before on Wednesday, which will likely overshadow the BoE meeting.

So, all told, the BoE rate decision looks like will be a quietish event. But will there be elements of surprises to cause a sharp move in the pound and UK stocks? The extent to which the pound might move will likely depend on (1) how many dissenters there will be, (2) whether and when active sales of gilts will begin and (3) how much of the BoE’s recent softer tone has been priced in.

Will there be any more dissenters?

Jon Cunliffe was the only dissenter last time, and if he is joined by two or more MPC members voting against a rate hike, this will be considered a dovish move and could see the GBP/USD break below 1.25 decisively. However, if Cunliffe remains the sole dissenter again, then we might see a more modest downside reaction to any dovish commentary in the statement.

However, if policy makers are more concerned about inflation broadening out and wages rising too quickly, then the market may interpret this as the bank being more hawkish since it will raise the prospects of front-loading interest rates hikes. Such a scenario could lead to a sterling recovery towards $1.30s again.

What about active gilts sales?

The likely 25-basis point hike will lift the benchmark lending rate to 1%. This will be the highest interest rates have been in more than a decade. Precisely, interest rates were last this high in February 2009, when monetary policy was aggressively being loosened in response to the financial crisis. While this may have some historical importance, more significant is the fact a 1% interest rate means the threshold at which the BoE has said it will consider starting active sales of the gilts it has piled up on its balance sheets, will have been reached.

Gilt purchases actually peaked at £875 billion at the end of last year and the process of “quantitative tightening” already began in March, when some £28 billion of maturing gilts were rolled off the balance sheet.

But if the BoE now actively sells gilts, this will put the UK central bank in its own league, since no other major banks have done this yet. Active sales could cause a sharp rally in UK bond yields, which, in turn, could see the pound rally aggressively – and in doing so, it could unnerve equity markets.

BoE Governor Bailey not so hawkish

But the BoE Governor Andrew Bailey has already softened his language on the need for more policy tightening, suggesting that future hikes will be made at a measured and steady pace.

In April, Bailey had said: "We are now walking a very tight line between tackling inflation and the output effects of the real income shock, and the risk that that could create a recession and pushes too far down in terms of inflation.”

The ongoing conflict in Ukraine is causing all sorts of problems in the energy sector, while China’s Covid-related lockdowns has dampened demand in the world’s second largest economy. So, reducing QE will probably not be high on the BoE’s agenda right now. Indeed, Bailey was quoted recently as saying the bank will only conduct active sales of assets on its balance sheet in stable market conditions and the bank will cease such operations if conditions change.

Instead, a growing number of analysts expect the UK central bank to publish a detailed plan and launch a consultation into active sales of gilts, and thus delay the process.

What exactly is priced in?

As mentioned, a 25-basis point hike is probably priced in, but potentially so is the BoE’s softer tone towards more hikes of late. With UK consumer inflation being at 7% right now and consistently above expectations, I don’t think the BoE will deviate too much from its previous hawkish path.

In as far as the cable is concerned, there is the other side of the equation that one needs to take into account as well: the US dollar and the Federal Reserve’s policy decision on Wednesday. For that, my colleague Matt Weller has already provided a preview. If you take the dollar out of the equations, I would say the downside risks for the pound have now diminished in light of the sharp two-week selling. 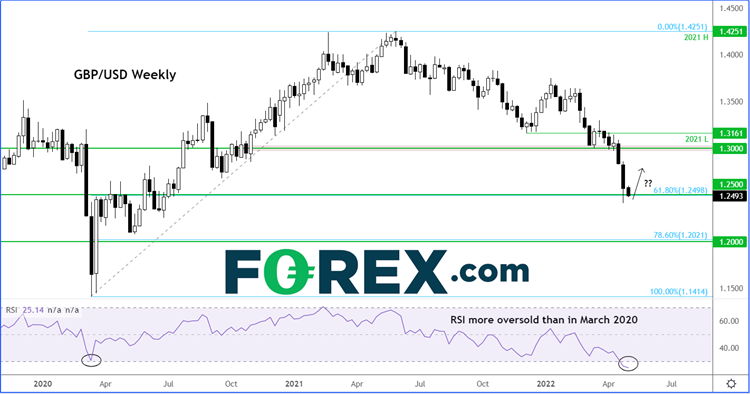 Ahead of the BoE and FOMC rate decisions, the cable has been consolidating around psychologically important $1.25 handle. Here, traders, who had been shorting the pound, have been happy to book some profit as they await fresh direction from the macro front. It is interesting when you consider that the 61.8% Fibonacci retracement level also converges around 1.2500. Could we see a bounce back to 1.2700 from here? If the BoE is more hawkish, I wouldn’t rule out a revisit of 1.3000.