Another week, another Brexit speech from UK PM Theresa May to a skeptical Parliament.

In comments to the House of Commons earlier today, May said that staging a second referendum "would say to millions who trusted in democracy that our democracy does not deliver” and that such a vote would exacerbate divisions rather than heal them. She also stated that the postponed “meaningful vote” on the Brexit deal would take place the week of January 14.

In other words, the minority political party doesn’t like how the majority party is governing…and we’re still no closer to Brexit progress than we were at the start of last week. Debate on May’s proposed deal is scheduled to resume when Parliament returns from Christmas recess the week of January 7th.

For its part, cable has bounced off last week’s lows but is still definitively in a short-term (and long-term) downtrend. As we go to press, the pair is consolidating just above the June 2017 low at 1.2590, but the recent bearish channel is likely to reassert itself soon. It will take (at least) a break above last week’s high at 1.2686 to give bulls a glimmer of hope, and even then, it will be hard for sterling to rally meaningfully until there’s more clarity on Brexit. 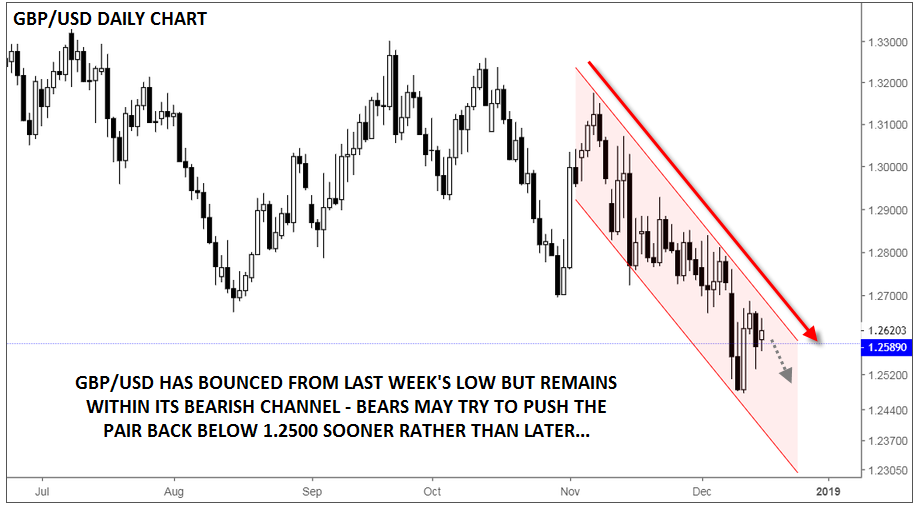