Cable to have another crack at breaking above 1.20?

Japan’s growth is expected to grow slower than previously expected according to a Reuters poll – although still projected to remain positive until 2023. The slowdown in the US economy and supply issues are key factors behind the downgrade.

Rishi Sunak remains the favourite candidate to replace Boris Johnson as PM, taking 115 votes in the third ballot. Truss is now the favoured runner-up with four candidates remaining, according to bookies.

AUD was the strongest currency following hawkish RBA minutes, which stated that interest rates were “still very low” for an economy with such a tight labour market.

US homebuilders sentiment hit a more-than 2-year low according to the NAHB, adding more worrying signs to the sector which already points to a slowdown. A slew of weaker earnings and a report that Apple aimed to cut back hiring and spending in 2023 also weighed on sentiment for Wall Street.

European futures suggest indices are set to open around -0.6 to -0.9% lower, whilst US futures found some stability overnight and set to open slightly higher.

Later today the US release building permits and housing starts, but first we have UK wage data at 07:00 BST and final inflation prints for Europe at 10:00.

GBP/USD rose to a 5-day high on Monday and briefly traded above 1.2000. Given the maturity of its downtrend on the daily chart, we see the potential for it to bounce higher.

The 4-hour chart shows it has broken its bearish trendline, although a bearish engulfing candle formed around 1.20 and the weekly R1 pivot point. Prices are no pulling back against that initial surge so now looking for a higher low to form above or around the weekly pivot point, which could be of interest to bullish swing traders. 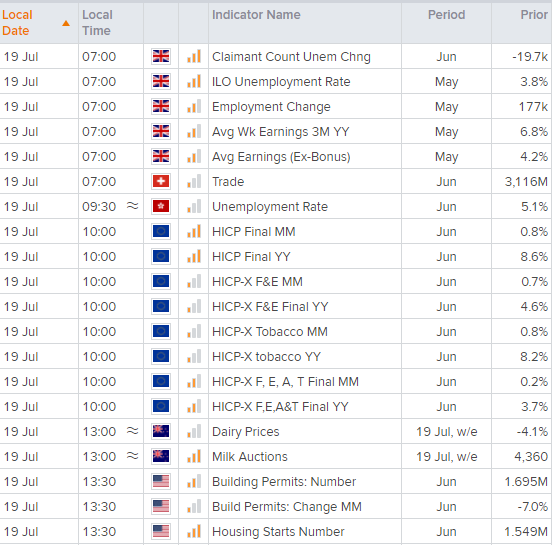