Canadian inflation remains excessively high. What does it mean for USD/CAD?

Last week, the Bank of Canada’s Toni Gravelle said that it is possible that the Bank of Canada may have to raise rates above neutral because the economy may become less sensitive to rate hikes.  On Wednesday, Canada released CPI for April and the data backs up Gravelle’s view to hike rates.  The headline print was 6.8% YoY vs an expectation of 6.7% YoY and 6.7% YoY in March.   This was the highest increase since January 1991.  In addition, Core CPI beat expectations by an even larger margin. The print was 5.7% YoY vs and expectation of 5.4% YoY and March’s print of 5.5% YoY. This is the highest level for the Core number EVER!  As a reminder, the Bank of Canada raised rates on April 13th by 50bps to 1% and said that more rate hikes will be necessary as demand increases and inflation persists well above the BOC’s target of 2%.  The next BOC meeting is June 1st.

On a daily timeframe, USD/CAD had been trading in a sideways channel between 1.2453 and 1.2965 since mid-November 2021.  On May 5th, the pair broke above the top trendline of the channel and reached a high of 1.3077 on May 12th, just below the 127.2% Fibonacci extension from the highs of December 20th, 2021 to the low of April 5th, near 1.3116.  However, thus far, the move has proved to be a false breakout as price sold off for the next three consecutive day and moved back into the range. 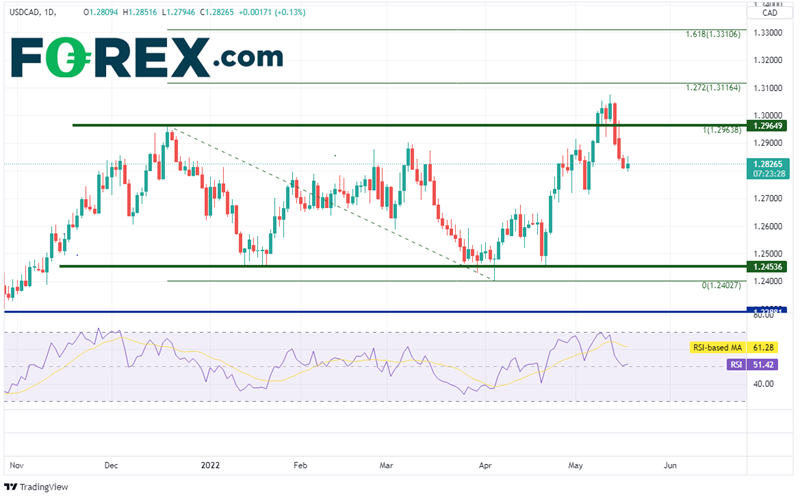 On a 240-minute timeframe, USD/CAD has been moving higher in an upward sloping channel of its own since April 21st.  However, on May 16th, the pair broke below the channel and pulled back to 38.2% Fibonacci retracement from the lows of April 21st to the highs of May 12th, near 1.2840.  If price continues to move lower, first support is at the 50% retracement from the same timeframe near 1.2767, then double bottom support at 1.2725.  If price breaks below there, it can fall to the 61.8% Fibonacci retracement from the recently mentioned timeframe near 1.2695. However, if the current move proves to be just a pullback in the uptrend, first resistance is at the bottom trendline of the upward sloping channel near 1.2950, then the recent highs at 1.3077.  If price breaks above, it can then move to the 127.2% Fibonacci extension mentioned on the daily timeframe near 1.3116. 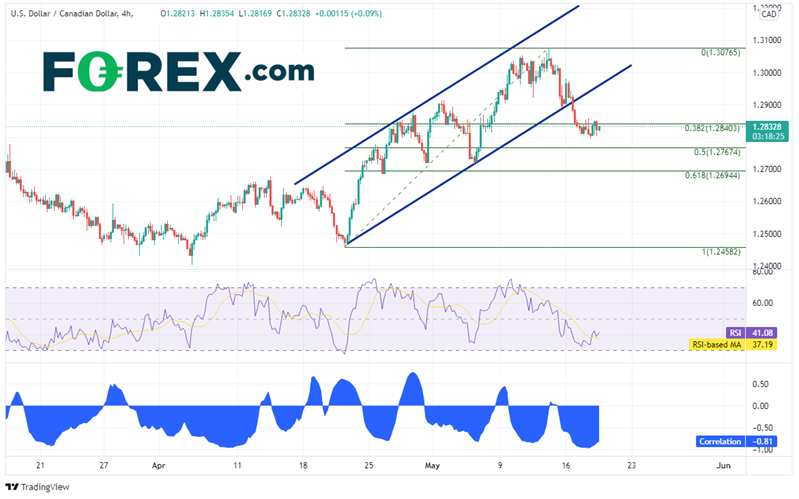 Notice in the bottom pane on the 240-minute chart that USD/CAD and Crude Oil are once again in a strongly correlated negative relationship with a reading of -0.81.  Any readings below -0.80 are considered strong.  Therefore, this means that on a shorter timeframe, when Crude Oil moves in one direction, USD/CAD should move in the opposite direction.  Note that this is only for the 240-minte timeframe.  On a daily timeframe the current correlation is near 0, which means there is no relationship at all.  If the strong negative relationship continues on the shorter timeframe, it may move to the longer daily timeframe.

The Canadian CPI print confirmed what the markets had already expected: that inflation continues to rise in Canada and will force the BOC to raise rates further.  However, it is important to watch the recent price action in USD/CAD.  Is this this just a pullback in an uptrend or will this be a deeper correction?  The direction of crude oil on a 240-minute timeframe may provide clues.