China’s economy expanded in June according to the official PMI data released by the NBS (National Bureau of Statistics). The composite PMI, which includes both services and manufacturing sectors expanded slightly by 50.2, although it was held back by the manufacturing sector which also rose to 50.2 (versus 50.5 forecast). It was the services PMI which made up the baulk the baulk of expansion in June by rising at its fastest rate in 13-months at 54.7, beating expectation of 52.5.

Today’s NBS numbers were encouraging to see, even if manufacturing slightly underwhelmed and expectations were for an improvement with the easing of lockdown restrictions. In fact, I’d argue that the market reaction would have been more noticeable today’s PMI’s not expanded. Attention now shifts to Caixin’s manufacturing PMI data tomorrow - which is a privately run survey - to see if they back up or even better the data from the NBS.

The China A50 has made a solid recovery over the past 7-weeks. Earlier this month the government unveiled a 33-point stimulus package to help ease that pain that they may miss their growth target of ‘around 5.5%’. Premier Li has applied further pressure on local governments to help prevent an economic slowdown, and (renewed) lockdown restrictions eased in Shanghai.

Yet producer prices continue to disinflate, consumer prices remain benign and growth is likely to remain below target. And that leaves the door open for further stimulus which is usually a net-positive for equities. 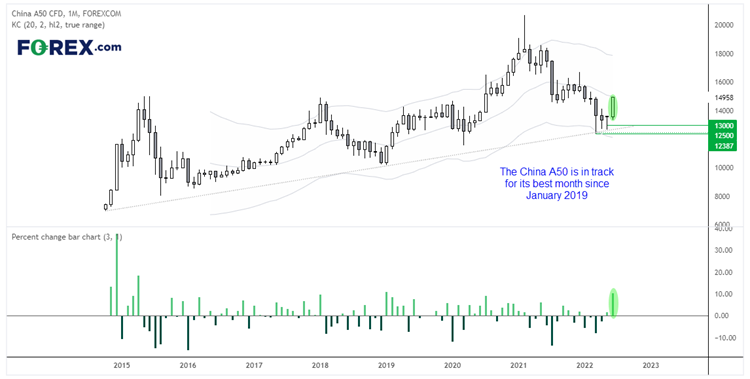 Chinese equity markets have responded well to today’s PMI figures, and bulls aren’t pulling any punches today with the index on track for its best month in 3-years. Given it endured a 13-month correction from the 2021 peak and there’s hope that the worst of Covid is in the rear-view mirror, dare I say… the market may have bottomed in March. Note how it found support at the long-term trendline and momentum is pointing firmly higher. 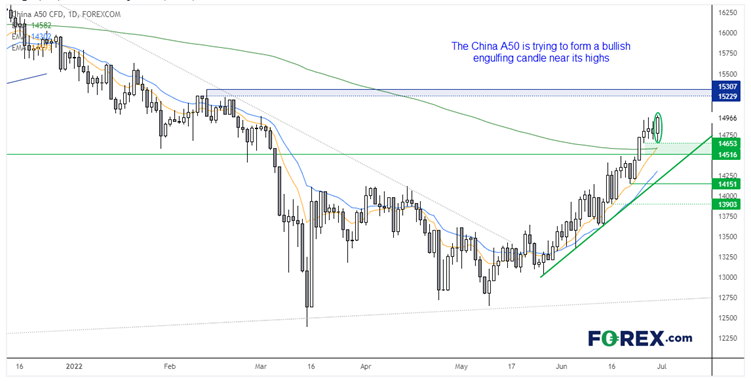 The daily chart has formed a strong trend, and its recent consolidation held above the 200-day eMA. Today’s rally saw it touch its highest levels since March and, whilst the day is yet to close, the market is trying to form a bullish engulfing candle at the highs. The market now looks like it wants to rally towards the 15,300 resistance zone, and our bias remains bullish above the 14,516 low.