The US dollar fell sharply against the yen on the back of the BoJ surprise, but it has managed to hold its own relatively better against other currencies in what has been a quiet week in FX outside of Japan so far. Interestingly, the Dollar Index (DXY) has now arrived at a massive technical support area and with all the major central banks out of the way, I would not be surprised if it bounced here, setting the stage up for another bullish run.

Before discussing the macro reasons as to why the dollar might rebound, let’s have a quick look at the weekly chart of the DXY: 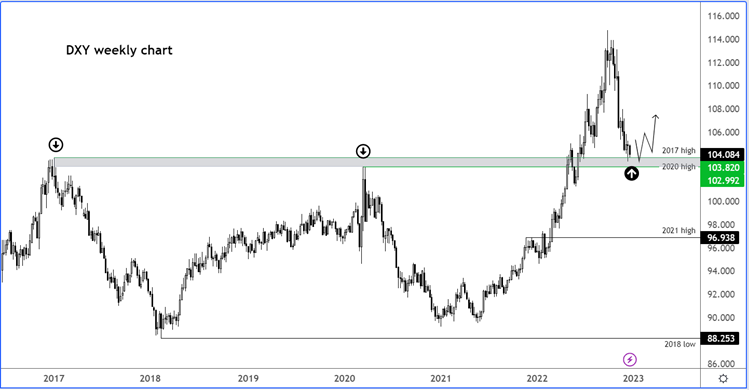 In case you are not aware, the DXY is a weighted geometric mean of the greenback's value relative to following currencies:

Given the large weighting against the euro, a lot depends on the direction of the single currency. But the Japanese yen, British pound and Canadian dollar can all have an influence on it too.

So, if you are bullish the Dollar Index, you are most likely bearish the EUR/USD, and vice versa. The EUR/USD, GBP/USD and commodity dollars could all fall back if sentiment towards risk remains subdued.

Though there is some optimism in the air that US inflation has peaked, this alone might not be enough to keep investors optimistic for too long. We are continuing to see signs that world’s largest economy is heading towards a recession, as indicated for example by the latest S&P Global PMI data released on Friday. In case you missed it, the services PMI fell to 44.4 from 46.2, while the manufacturing PMI slipped to 46.2 from 47.7. Last week we also saw the Empire State and Philly Fed Manufacturing indices, as well as US retail sales and industrial production all disappoint expectations.

Investors are also worried about the Fed and ECB potentially over-tightening their respective monetary policies, which could tip the economy into a recession that might otherwise be avoided. The Fed has projected that interest rates will rise to around 5.00-5.25% before hiking is paused, while the ECB President Christine Lagarde warned that “we should expect to raise interest rates at a 50 basis-point pace for a period of time.”

If concerns continue to grow about the health of the global economy, this should provide support for the safe-haven US dollar, with commodity dollars likely to be hit the hardest.

Meanwhile, the pound looks like it will struggle to rise further against a weak macro backdrop in the UK. What’s more, the split among the MPC has given rise to speculation that the rate increases might stop sooner than expected as high inflation in the UK continues to hurt pockets of consumers and weigh on business activity. The ongoing industrial actions across the UK are likely to hurt the economy further. Across the Atlantic, the Fed signalled that it wants to hike rates further so that the terminal rate is above 5% and keep it there until it is convinced that inflation is on a sustainable downward path towards its 2% target. This should keep the GBP/USD undermined, and the Dollar Index underpinned.