Christine Lagarde was on the wires today discussing the Euro and interest rates. She noted that the Euro depreciation has added to inflationary prices and that she expects interest rates to rise further over the next “several” meetings.  In addition, she said that the ECB might have to take further measures if inflation is not at target when rates are at neutral (however she noted that she doesn’t know where the neutral level is!).  She also said that she doesn’t expect a recession this year or next!! Hawkish? Remember, at the press conference after the ECB meeting, Lagarde said that the ECB is “far away” from the rate that will return inflation to 2%!

Later in the day, ECB member and head of the Bank of Spain, De Cos, was also chatting it up on the wires.  He noted at that the ECB needs to stay extremely vigilant on inflation expectations.  In addition, he said he urges ECB vigilance over possible de-anchoring of inflation expectations and noted that Eurozone data points to a sharp economic slowdown (although he doesn’t use the word recession).

Are Lagarde and De Cos trying to tell is that there is a chance of a 100bps rate hike at the next meeting?  A 75bps rate hike is already priced in.  Perhaps the September Eurozone CPI flash on Friday will be higher than some are anticipating?  Expectations are for an increase to 9.7% YoY vs an August reading of 9.1% YoY.  The Core CPI is expected to increase to 4.7% YoY from 4.3% YoY in August.  Those are some big increases if confirmed!  So, both Lagarde and De Cos are concerned about inflation, yet neither see a recession (De Cos only sees a sharp economic slowdown).  Are they worried about the value of the Euro depreciating too much (in the same manner that the Pound recently depreciated)?

EUR/GBP has been moving smartly higher since March 7th when the pair reached a low of 0.8203.  Since then, the pair broke out of a downward sloping channel and moved as high as 0.8719.  The pair then pulled back and retested the top trendline of the channel, creating a descending wedge (green line).  On August 29th, EUR/GBP broke above the top trendline of the wedge and reached the target of the wedge on September 15th.  The pair gently moved higher above 0.8720.  On Friday, after PM Truss’s decision to implement the mini-budget, EUR/GBP shot higher, reaching resistance at the January 20th, 2021 highs near 0.8925.  Today, during the GBP “flash crash”, the pair moved as high as 0.9278, just under horizontal support at 0.9292, which was the high from September 11th, 2020.  However, the pair then pulled back, forming a large inverted hammer on the daily timeframe.  This is an indication of a potential reversal signal.  Resistance above is up at the 0.9278 highs of today.  First support is at today’s lows of 0.8852.  Below there, price can fall to the September 22nd lows at 0.8691 and then the low from September 6th at 0.8570. 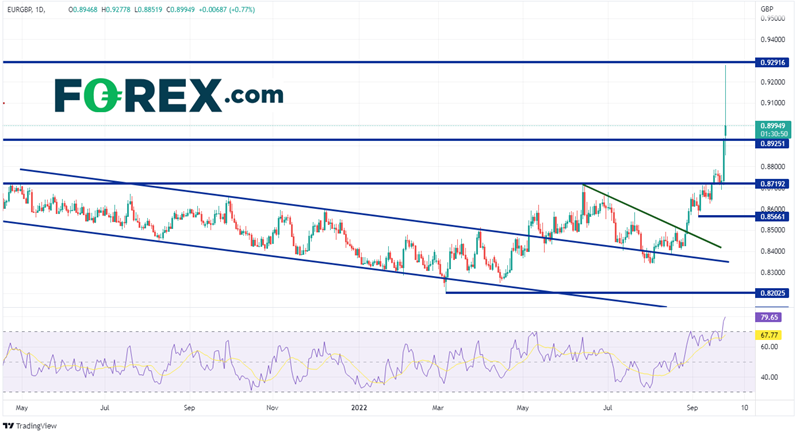 The ECB must have been excited when it saw its currency rising vs the Pound. However, just as quick as the pair moved higher, it had pulled back.  Could the hawkish ECB speak been the result of the Euro move back to the lows in EUR/GBP (not to mention the new lows in EUR/USD). Watch for more comments this week and next, especially if the Eurozone releases a stronger than expected CPI print on Friday!